Store Page
Hearts of Iron IV>  Workshop > Daemon's Workshop
This item has been removed from the community because it violates Steam Community & Content Guidelines. It is only visible to you. If you believe your item has been removed by mistake, please contact Steam Support.
This item is incompatible with Hearts of Iron IV. Please see the instructions page for reasons why this item might not work within Hearts of Iron IV.
Current visibility: Hidden
This item will only be visible to you, admins, and anyone marked as a creator.
Current visibility: Friends-only
This item will only be visible in searches to you, your friends, and admins. 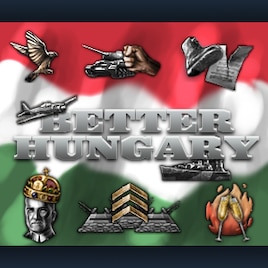 Hearts of Iron IV: Death or Dishonor
Created by

Daemon
Offline
See all 75 collections (some may be hidden)
You need DLC to use this item.

This item has been added to your Subscriptions. Some games will require you to relaunch them before the item will be downloaded.
Description
Hungary focus tree overhaul mod for singleplayer!

A note about this and other mods
I made this mod in my spare time for fun, not because I wanted to make a perfect (or even good) mod. If you would like a historical, feature packed, well-made experience, that's not what this is. You might be interested in other mods, like Expanded Hungary and Hungarian Flavor. Thank you to everyone for the encouragement and kind words, I appreciate it.

Has this ever happened to you?
You want to play Hungary in singleplayer, but the focus tree is boring and short, has no interesting choices for communist or democratic paths, and the state of the country is just too realistic and down-to-earth to do anything. Even R56 barely adds any focuses.

Better Hungary is the solution!
Here's just some of the stuff you can do:

With a focus tree that's as wide as Britain's and as deep as... the USSR's. But you will still have focuses to do in 1945. Plus events, decisions, and ideas, changed and improved compared to vanilla.

I tried to include as many fun game mechanics as I could that are usually not accessible to Hungary, to make the gameplay more interesting and fun.

This mod makes Hungary easy / challenging to play in singleplayer. However, in multiplayer it's too OP to be playable.

There might be several things broken in this, but I have tested it a lot, and it is playable.

Compatibility: Not Ironman compatible. Not tested with any mods, but it could be compatible with any other focus tree mods. Except for the countries/cosmetic file that has to be changed for the country color to work, that might conflict with other mods.
< >
33 Comments

⊕✠Za!Lu!Pa!✠⊕ Apr 12 @ 9:06am
This mod have not normal translations of each oyher lenguages