Store Page
Age of Empires II (2013) > Guides > hot_gril's Guides
This item has been removed from the community because it violates Steam Community & Content Guidelines. It is only visible to you. If you believe your item has been removed by mistake, please contact Steam Support.
This item is incompatible with Age of Empires II (2013). Please see the instructions page for reasons why this item might not work within Age of Empires II (2013).
Current visibility: Hidden
This item will only be visible to you, admins, and anyone marked as a creator.
Current visibility: Friends-only
This item will only be visible in searches to you, your friends, and admins.

Intro (skip if you want)

Comments
Announcements
1/27/2020: In case you haven't guessed, this guide is super outdated. I recently tried to install the game on Wine and found that Steam is entirely broken in Wine due to issues with the Chrome renderer. I guess nobody cares to fix it now that Steam Play + Proton are available, but sadly those are not on Mac, Linux only. This game's multiplayer is so glitchy (worse than the old 1999 Mac version) that I don't want to play anyway.

5/16/2015: I'm still busy with college and work, but I had a little time to play AoE II HD recently and noticed that my old Wine wrapper from the original guide was broken! Luckily, I found that PlayOnMac has updated its Steam bottle, so it works now with AoE II HD! So I've quickly updated the guide, removing all the piles of old junk.
Intro (skip if you want)
What is Wine? Wine allows Intel Macs to run Windows programs in Mac OS X without a virtual machine. That is, the Windows OS itself is not involved. It also runs on other Unix-based OSs on any Intel PC. It is faster and much more convenient than a VM. Theoretically, it could be faster than running the programs in Windows with Boot Camp, but this is usually not the case (actually, it tends to be slightly slower).

Wine is finicky, and certain Windows programs won't run properly in it. Steam complicates the setup, too. So I cannot guarantee that this will work for you. The most reliable (but least convenient) way to play this game is to play it in Windows in a VM or Boot Camp. But I have been playing this game exclusively in Wine for quite some time and love it.

What should work:
- Singleplayer (stable and without lag, campaigns not tested much).
- Multiplayer games and lobbies (stable and without lag, low ping, tested frequently).
- The Forgotten DLC (not extensively tested).
- Map Editor.
- Plays pretty nicely with desktop features in Mac OS X, including Exposé, with only minor issues.
- Full screen mode and windowed mode, with a resizable window.
- Steam.
- Steam notifications, such as incoming chat messages, appear as minimized windows in the Dock.
- Steam Workshop subscriptions.

What doesn't work… at least not yet:
- Steam in-game overlay.
- The "invite" button in AoE II HD. You have to use the "invite to game" menu item for the friend in Steam.
- Intro videos.
- The launcher window is glitchy. This guide shows you how to skip it.
- When typing in any text fields, including the chat window, you cannot see text until you press return. This is the only serious problem.

System Requirements:
- An Intel processor. Motorola processors (G5, G4, G3, earlier) will not work at all.
- Decent hardware. Any Intel Mac desktop should be good enough, but older MacBook Airs and circa 2007 Mac laptops might be pushed hard.

2. Press "Install" (plus button) in the PlayOnMac main window. Search for Steam. Install it. Don't check "run Steam now" or whatever it says when it's done. 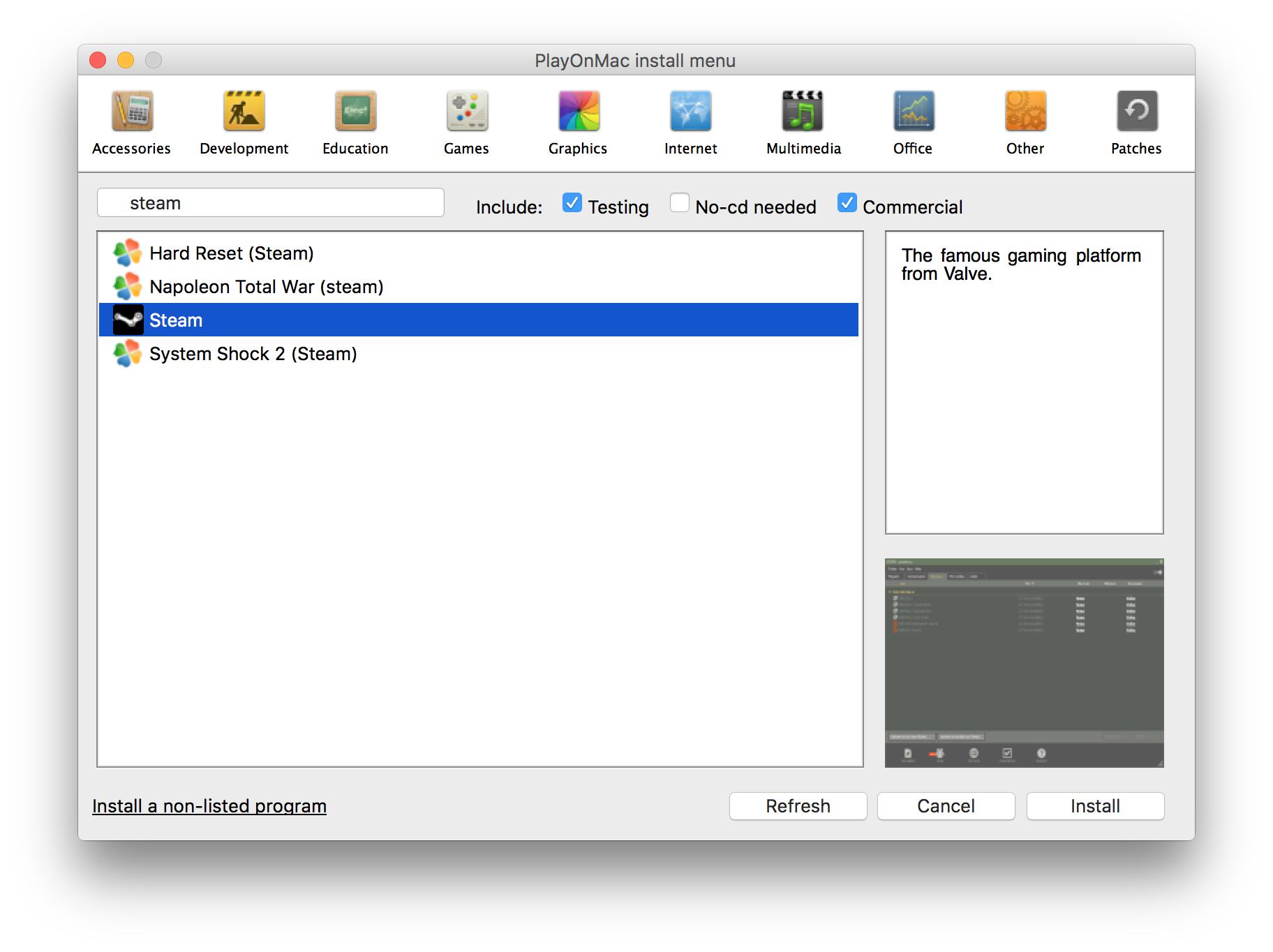 3. You should now have a Steam icon in your PlayOnMac main window. Only if you don't, hit "Configure" (gear button). Click on the Steam prefix. Under the "General" tab, press "Make a new shortcut from this virtual drive". Wait for it to scan, then create a shortcut for Steam, then hit cancel to go back. 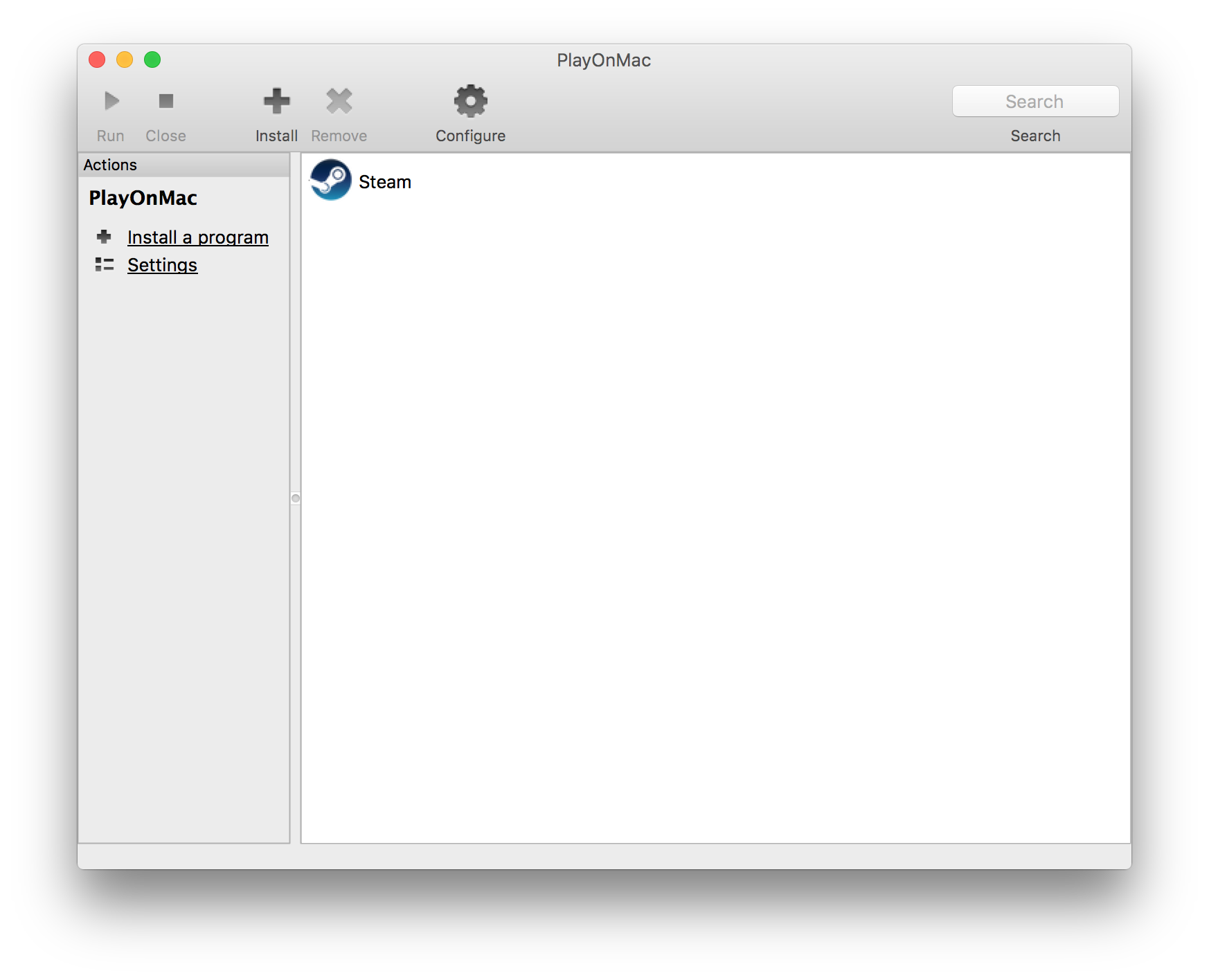 4. You should really now have a Steam icon in your PlayOnMac main window. Select it, and press "Run" (play button).

5. Log into Steam, and install the game like you'd do it in Windows. Run the game. The launcher window might be missing text on its buttons, but you can click the buttons anyway. Have fun!
FAQ
Q: This is so easy. Why bother making a guide?
A: The process used to be longer and more complicated. I had to figure out a lot of hacks to make it work. The old guide was much, much longer. Luckily, things outside of my control have recently changed to improve the situation, so I updated the guide so people don't try any crazy stuff like before. It is a little sad, though, since I put a lot of work into my old guide ;_;

Q: Did you play on GameRanger?
A: Yeah, my name was ßømß or something.

Q: Why don't you just run Windows?
A: I use OS X for school and work, and I occasionally play games. This is the only Windows-only game I play (thanks, MSFT), and I don't feel like booting into Windows every time or running a VM to play it. Surely others will find Wine much more convenient, too.

Q: Can I play other Windows-only games in Steam through PlayOnMac?
A: Yes, you can in some cases! Give it a shot. I used to do it for Unturned. I don't know what works and what doesn't. Wine and PlayOnMac are both constantly improving, and games are constantly being patched, so everything is up in the air.

Q: Can you help me with running some other game?
A: Chances are I don't have the game, and I rarely have free time, so sorry... Ask a tech-savvy friend to help.
< >
243 Comments

Argomemnon Jun 19, 2020 @ 8:20am
There's a fix to the issue that you noted in your latest announcement. I made a guide on Reddit: https://www.reddit.com/r/aoe2/comments/hc2dbp/psa_you_can_play_aoe2_hd_on_mac_heres_my_guide/?utm_source=share&utm_medium=web2x

dsarvestani Mar 29, 2020 @ 5:29pm
Same issue I followed all the steps but when I go to click install game it gives me an error: invalid platform :(

solemn lemon Oct 18, 2019 @ 8:44am
Hi there. Just wondering if it's possible to install my steam games on an external hard drive whilst still using wine. Thx for the guide :)

Pugthedoge May 26, 2019 @ 10:38am
I'M TRYING TO DOWNLOAD GTA ON MY MAC YET IT SAYS INVALID PLATFORM EVEN THOUGH I COMPLETED THE STEPS

DavidTriphon Jan 7, 2019 @ 8:26pm
If you are having the "Content Servers Unreachable" issue while using wine on mac or PlayOnMac try using this workaround to get Steam to install games. It worked for me on my 2013 MacBook Pro.

chasesterling Nov 22, 2018 @ 3:13pm
When I run steam on "PlayOnMac" I can't download the content of Age Of Empires 2. It says Content Servers not ready. ANY THOUGHTS?? Thanks.

Peter Mar 20, 2018 @ 12:27am
does anyone know how to change the resolution of the game? The models appear to be so big in game, I tried to change it in the wine configuration but it doesn't help.

I can't get it to make the new shortcut and for it to be showing on the face of playformac.

Where do I choose for the shortcut to be created?
< >