Store Page
Total War: WARHAMMER II>  Workshop > stephane.f.david's Workshop
This item has been removed from the community because it violates Steam Community & Content Guidelines. It is only visible to you. If you believe your item has been removed by mistake, please contact Steam Support.
This item is incompatible with Total War: WARHAMMER II. Please see the instructions page for reasons why this item might not work within Total War: WARHAMMER II.
Current visibility: Hidden
This item will only be visible to you, admins, and anyone marked as a creator.
Current visibility: Friends-only
This item will only be visible in searches to you, your friends, and admins. 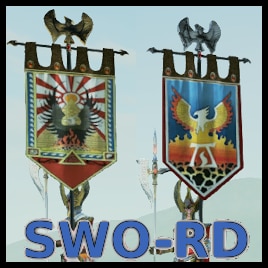 stephane.f.david
Online
See all 15 collections (some may be hidden)

This item has been added to your Subscriptions. Some games will require you to relaunch them before the item will be downloaded.
Description
This pack contains the textures and models for the Banners, required by SWO-RD core. Banners are animated.

This is currently limited to the Elves, more will come later.

----
For High Elves, units have two flags: a kingdom flag, shared by all units from the same province, and a unit specific flag, also using heraldry for this province. Both infantry and cavalry have flags.

---
Dark Elves have only one banner. For some minor factions such as Forgebound or Deadwood sentinels, the banenrs for individual units is almost the same. Major factions have different banners for different types of units.


---
Wood Elves have only one banner, for their kingdom (but all the Asrai kingdom are represented, including Atylwyth, Modryn, Cythral, etc). Two different banners, with different top (one for the male units, one for the female units).
Eternal Guards, Glade Guards, and Wildwood rangers have a banner, and also Wardancers and blade singers.

Deepwood Scouts or Waywatchers don't have banners. Stealthy units should not carry a big flag to reveal where they are!

For cavalry, glade riders have a flag, but not Wild riders or Sisters of the Thorn, since it doesn't work well with their animation IMO

---
Bretonnia
- peasant, men at arms and yeomen have only one flag, the main flag of their dukedom.
- Knights (errant, realm and questing) have two flags. The dukedom flag, shared by every unit recruited in the region, and a secondary flag, randomly selected in a pool of 5 flags specific to each dukedom, matching the dfferent heraldry found on the shields. Bretonnian knights are a mitch match of different heraldry, and are not as uniformed as the Empire. Note that the flag bearer is actually a squire: the knights fight, they are too busy to hold a flag, that's the squrie role.
- Knights from the crusader factions have only one main flag.
- Grail knights and Guardians have two flags: the dukedom flag, and a special grail flag.

---
The Empire
- Most units have two banners: the state flag, and a secondary banner specific to the unit, and siull inline wiht the state heraldry.
- Units from minor provinces (Sylvania, Solland, Sudenburg) or recruited via imperial supply have only the state flag, no secondary banner.
- Knight orders and RoR have their own banners.
- Empire banners often have a text... and it can be ready normally from both sides!

That's almost 300 flags for the Empire.

---
Dwarves
They have two banners :
- the bigger one with the hold flag, shared by all the units recruited in the same province. This one is animated.
- the smaller one is faction coloured by not animated, and displays a silver symbol, specific to the unit type (and shared by all factions).

RoR have their own flag, but only one (no hold flag for them).

Slayers don't have banners (fixing the pole directly to their bare chest instead of the cuirass was too painful, several slayers died during the test).


---
Greenskins:
-Tribal units have two banners. One is the Tribe (i.e. faction) flag, and is shared by all units recruited in the province. It is slighlty animated. The other, a bit smaller, is specific to the unit type, shared by all units of this type. It is not animated, but is faction coloured, and comes with 4 different versions, more or less damaged, for more variety.
-Waaghh units have only the unit type small banner (no tribe banners). Generic units don't have banners.

Goblin and Orcs units all have banners except Chariot, Spider Rider and Squig hoppers. Monsters don't have banners

---
Skavens:
- Only one banner with the clan heraldry.
- Skavenslaves, Clan Rats, Stormvermin, Monks and Gunners (night runner, gutter runners) have a banner. RoR have their own flag
- Death Runners don't have a banner, they want to be stealthy.
- Weapons Teams (including Globadiers) don't have banners. I think it would look weird with their animation, or attached to back with their equipment.

Two types of banner: simple one with no ornament nor bell for skavenslaves, clan rats and runners. More complex one with bell and ornament for Monks, Stormvermin.

---
Lizardmen:
- One banner per unit, not animated (stone doesn't wave as much in the wind as cloth banner).
- 6 small variations for different types of units.
- All Saurus/Skink units have banners except Chameleon and Flying units.

---
Only a few sample images are included here visit this link to see them all[www.twcenter.net]


Credits:
- h3ro for AssetEditor, which I used to convert all the models from CA assets.
- h3ro for his help and adviçe to make the banner animated
- Sythropo for the initial models of the HE/DE banners.
- Ser Jaime Lanister (Dark Elves heraldry)
- Den (immersive banner), for the idea of having the decorated top for HE
- Phazer for 10% of the credits (he knows why)
- [HN] (battle standards), a few textures adapted.

I mod for free and will always keep it this way. But an extensive mod means hundreds of hours spent modding! If you want to show your appreciation, a small donation is always welcome.

stephane.f.david  [author] May 18 @ 9:07pm
This mod is actually a submod for SWO-RD. It contains the models and textures for all the banners, but to show regional banners, you need regional units, which are not in vanilla. SWO-RD adds everything you need. If you don't want to use SWO-RD, you could still use the banners, but it requires somework to connect them to units from other mods, or from vanilla

Warden of Tor Yvresse May 9 @ 5:47am
This is not compatible with SFO, right?