Store Page
Arma 3 >  Workshop > IceBreakr's Workshop
This item has been removed from the community because it violates Steam Community & Content Guidelines. It is only visible to you. If you believe your item has been removed by mistake, please contact Steam Support.
This item is incompatible with Arma 3. Please see the instructions page for reasons why this item might not work within Arma 3.
Current visibility: Hidden
This item will only be visible to you, admins, and anyone marked as a creator.
Current visibility: Friends-only
This item will only be visible in searches to you, your friends, and admins. 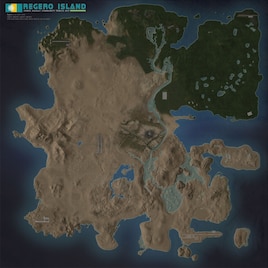 IceBreakr
Offline
See all 519 collections (some may be hidden)

This item has been added to your Subscriptions. Some games will require you to relaunch them before the item will be downloaded.
Description
Regero Kingdom - Armed Assault Tribute Map!
Version 1.1 (Nov 20, 2020)

IceBreakr and his team brough some classics from the old game to new A3 standards and added new areas in.
Credits go to Bohemia Interactive for Proving Grounds, Wedge for Isla Barbuda, Alex.Sworn for Syr Darain & Aussie for Yanutha sectors. There is also a new Chatto Valley area that is still lush and non-affected by earth erosion and that horrible experiment that went wrong in area that has become known as proving grounds.

Background story:
Queen Zoe Nylund invited your PMC group to protect her weather station up near the Chatto river due to recent rebellion by the local population there. But it seems that is not a regular weather station or weather station at all. An incident in central ammo depot wiped out most of the fertile Regero's ground. Just as his dad, king of Regero, Leonard Nylund is approaching the San Isabel for the annual festival and parade, his helicopter is hit by the MANPAD missile. Believed on board is also to be Daniel, his son and brother to Zoe, the leader of Regero Army... chaos ensues with riots around the island as Zoe becomes the Queen of Regero... and your PMC team on her side to help her out.

Floppy401 Mar 4, 2022 @ 11:56am
The map is fantastic but in some parts of the map, an outdoor gunshot will sound like an indoor gunshot. I don't remember that happening until recently.

If I may ask, what's the last time you edited it? I use it fairly often and recently began to notice some minor changes which weren't there a month ago, even though Steam says this mod has been unchanged since November 2020. Like the floating helipads mentioned in the comment below. I swear they were never there.

Crack Jack Dec 23, 2021 @ 11:02pm
hey man im not sure if you have noticed but theres seems to be a runway in the middle of the ocean that seems to be confusing AI to land there

Markov219 Dec 20, 2021 @ 4:02pm
beautiful map just one question... whay are some of the helipads floating? found a few the one i come across the most often when i fly around is in the northern part of the map near the middle on a hill/mountain top

JediSith1981 Aug 12, 2021 @ 6:01am
@accordion re: Hey man, did you know that your work is absolutely fantastic and you should feel incredibly good about it?

Vortex Aug 8, 2021 @ 5:33pm
Howdy! I represent an Arma 3 Starsim Unit and we would like to use your map in our Mappack that we are putting together. What would we need to do so that you would allow us to use your map?

accordion Aug 5, 2021 @ 9:42pm
Hey man, did you know that your work is absolutely fantastic and you should feel incredibly good about it?

NorX Aengell Jun 10, 2021 @ 9:16am
Hi, thx for the map but it seems theres some misconfig for the height of the water.
O don't know how it works but your vision is blurry when your are on inflatable boat or when you are at the surface of the water.
< >