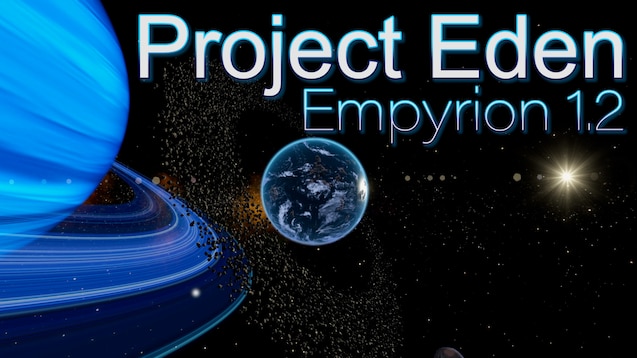 pantheis
Offline
See all 50 collections (some may be hidden)

This item has been added to your Subscriptions. Some games will require you to relaunch them before the item will be downloaded.
Description
Project Eden is a lore friendly, PvE exploration scenario currently in development intended for single player or small group play. It is compatible with public online play but you will want to configure your game options for it.
This scenario aims at slowing down the mid and end game progression for those who want a longer play through with more of a focus on open ended exploration instead of linear progression.

COOP:
Coop should be fixed now.


This scenario is designed for weight/volume, autominer depletion, and CPU (but optional and disabled by default).
It may be more demanding on your hardware and takes a few minutes to load.
Fully compatible with Reforged Galaxy. Should be compatible with most config mods but you will need to merge the changes over.

This is still very much a work in progress and will receive periodic updates. There may be bugs, some might break game saves. Some playfields and POIs are incomplete and many features are still being added or refined. I make every effort to test everything, but please let me know if you encounter any issues so I can fix them.

Features:
Custom Configs:
Uses a full set of custom configuration files to add new crafting components, items, weapons, blocks, NPCs, and a tech tree to the game. The configuration files focus on adding new content and does not alter any of the default game content except to add new items to the loot tables for very rare/ultra rare alien containers.
This should ensure it remains easily compatible with custom config mods such as Reforged Galaxy or any Config.ecf file.

Galaxy:
Uses a combination of fixed sectors and a highly customized galaxy config to randomly generate a large galaxy to explore. Different star types can have different resources, planets, and sectors.

Contains default and custom moons. Many moons are specialized as a good source of 1 or 2 types of resources, such as iron or cobalt rich barren moons.

Progression overhaul to slow down the mid and end game. Sathium/Neodymium/Titanium, and Erestrum/Zascosium are no longer found on the same planets so you have to explore. Ore deposits are smaller and more varied in their styles and some deposits will be a challenge and it's up to you how to tackle it.
Almost all deposits use the SSOR style underground nuggets so they are depleted from auto miners (if depletion is enabled).

Dozens of new traders have been added, including bulk traders who buy or sell large quantities of specific items but not always at the best price. Buy ore from Polaris mining fleets, deliver liquor from a Talon brewery to a Zirax trade station, or sell your hacking loot at a Project Eden research vessel. The goal is to allow progression through playing the role of a trader.

There are many new things to discover and beautiful places to see. Treasures hidden in the thick forests of jungle planets, buried alien ships, and unique capturable vessels are some of what you can find if you look hard enough. Exploration and salvaging is meant to be rewarding.

From small wrecks to alien fortresses, custom asteroids and Talon temples, there are over a thousand new POI prefabs. Many POIs are designs from the community and a list of credits can be found in the guide.

Currently there are several faction POI sets, with about a half dozen major faction sets planned. Factions will have their own traits, weapons, traders, and NPCs. Once custom reputations are added, many of them will become their own faction, but for now they fall under the existing factions.

Missions and Story:
New custom missions powered by the dialog, token, and PDA systems of Alpha 12. Explore to find hidden missions and uncover the story. Includes a new Empyriopedia section in the PDA to answer frequently asked questions about the scenario.
Also contains all of the missions from the standard default survival mode.
Note: the missions and story are a big work in progress. More will be added.

Please leave any suggestions or report any problems in the comments, and enjoy your visit to Eden!

Please do not report any game bugs to the Empyrion team unless you can reproduce it in a default, unmodified game.
Reproducing the issues in a default game helps both the game developers and myself. If it is a game bug then it will show up in a default game. Likewise, if it is an issue with the scenario then this will help confirm it so that I can fix it.
Before reporting any issue, please take a moment to read back through recent comments or bug reports. It's entirely possible your issue has already been reported or a workaround is available.
Popular Discussions View All (33)

Talk to the guard in the ARK on Maveth
MDMchan

ravien_ff  [author] 6 hours ago
Some in space are CVs, you can repair them and fly them if you wanted.

David "TheDave" Eastwick 8 hours ago
Damn, is that the same for space wreckages as well? (most seem to be bases) shame though been enjoying trying to renovate.

ravien_ff  [author] 9 hours ago
Crashed ships on planets are bases. It's problematic to spawn them as CVs. :(

David "TheDave" Eastwick 14 hours ago
We are having a bit of an issue with crashed ships and wreckages, not sure if its the scenario or if it is an empyrion bug.
When you put a core down they become a base not a CV so we can not restore them. It seems to be on nearly every wreckage we found (We did restore the "Sentinal" but all others...nope...thats a base says the game, even though they have thrusters)

Crao 16 hours ago
Thanks all the contributors, you are Fantastic

Crao 18 hours ago
Thank for this mods

KAObserver Mar 3 @ 4:52am
I just wanted to say thank you for this Mod! What a pleasure its been going to a new system and finding all of this activity and exploration potential.

Cabbot Mar 2 @ 8:55am
It seems ships we kill, like Periat-Class Frigates and such, don't respawn. Is there a setting somewhere we missed? We use the EAH to reset POIs twice a week, on our previous server running an older version of the scenario, ships respawned at the same time but this doesn't seem to happen any more. Any idea what we should look at/for?