Store Page
Stellaris >  Workshop > Mial42's Workshop
This item has been removed from the community because it violates Steam Community & Content Guidelines. It is only visible to you. If you believe your item has been removed by mistake, please contact Steam Support.
This item is incompatible with Stellaris. Please see the instructions page for reasons why this item might not work within Stellaris.
Current visibility: Hidden
This item will only be visible to you, admins, and anyone marked as a creator.
Current visibility: Friends-only
This item will only be visible in searches to you, your friends, and admins. 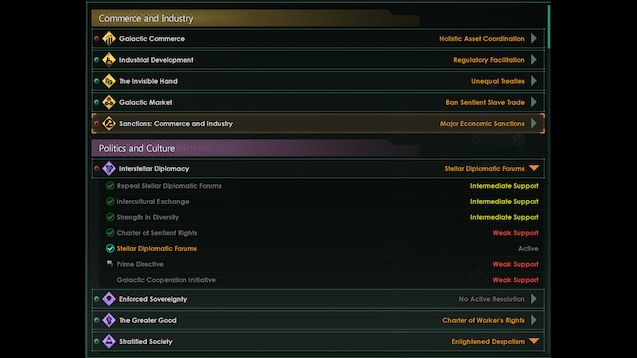 Mial42
Offline
See all 3099 collections (some may be hidden)

This item has been added to your Subscriptions. Some games will require you to relaunch them before the item will be downloaded.
Description
The Galactic Community in Vanilla is a neat concept, but suffers from lacking in content. This mod aims to rectify that by adding a number of new resolution trees, as well as tier six resolutions.

What this mod changes:
The Vanilla bug breaking Right to Work's assembly speed modifier is fixed.
Vanilla bug where Gestalts could not research Zro distillation even after passing Extradimensional Experimentation is fixed.
Formerly edited several vanilla defines to make the Galactic Community faster. These have been moved to a separate mod: https://steamcommunity.com/sharedfiles/filedetails/?id=2312203163.

What this mod adds:
A tier six Divinity of Life resolution: Crusade Against the Heretic.
4 New Ethics-Themed Resolution categories: Stratified Society (authoritarian), Galactic Diplomacy (xenophile), Enforced Sovereignty (xenophobe) and From Many, One (gestalt). Each of these resolution categories has six tiers.
A new edict: We Know Our Place (for rogue servitors) that makes bio-trophies have an empire-wide effect
A new casus belli: "Unequal Treaties" unlocked by the megacorp-themed resolution tree, that allows megacorps to force other empires into their ethics, seize any available branch offices, and change their authority to oligarchic with the merchant guilds civic (unlike Vanilla impose ideology, which turns them into a megacorp, AKA, competition).
A new Casus Belli: Crusade, unlocked by the Crusade Against the Heretic resolution, allowing for total war between spiritualist and machine/synthetic empires as well as the imposition of spiritualism on non-spiritualist empires, strengthening the fervor of both the Crusader and the Crusaded, if the crusade is successful.
Galactic Population Controls: Adds a new resolution to completely stop population growth in the Galactic Community. Designed to fight endgame lag; the AI should never vote for it unless it has the environmentalist civic.
Invisible Hand: A Megacorp themed resolution tree designed to make branch offices and trade value competitive with regular jobs as a source of resources.
Galactic History: A set of two resolutions designed to make the discovery portion of the game last longer and provide a source of minor artifacts when the Rubricator doesn't show up.

Compatibility: This mod overwrites 00_resolution_categories and 00_resolutions, and is therefore not compatible with other mods that do the same, including Galactic Community++. It is, however, compatible with Ethic-Based Resolutions by Cattan, as you can see in the thumbnail. Also overwrites 00_other_jobs and the refinery, factory, forge, and basic worker colony designations, as well as the extradimensional experimentation and project cornucopia decisions, the advanced research lab building, and the starbase buildings and modules affected by the unchained knowledge tree (but not the files these are contained in). Based on my testing, it is savegame compatible.

As of 12/2/2020, overwrites the Greater than Ourselves resolution. If you use a mod that makes this available from game start or otherwise through some non-GC mechanism, please put that mod AFTER this one in the load order.

MajorGeneralPike Aug 1 @ 4:38pm
THIS MOD IS A CRASHING PIECE OF SHIT, NONE STOP CRASHES

Originally, it was only the Japanese patch of this mod, but we have incorporated the corresponding patch with each update of the Stellaris main unit, and now it is compatible with 3.4.5.
Since it became official Japanese support from 3.4, it can be displayed not only in Japanese but also in English.
Please try it if you like.

Misterwheatley Jul 21 @ 8:00pm
I'm using this mod and so far no crashes at all. I use Irony Mod Manager, so that could be it.

Misterwheatley Jun 25 @ 9:38pm
Anybody know what in particular causes this mod to crash? I have yet to transition to 3.4, due to many of the mods I use still being outdated....

Aegis Jun 25 @ 2:16pm
can confirm, this creates instabilities in the mid-game that cause crashes. I've noticed these sometimes happen when an empire submits to the great khan, and when it awakens. Removing this mod from the playset seems to have fixed my crashes, even in old save game files that would crash a month after loading. Hopefully this helps the modder to fix it.