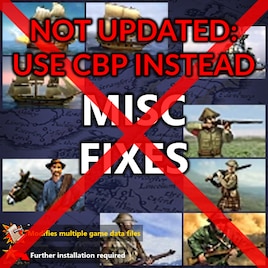 >>> This mod is no longer supported. <<<
Use the Community Balance/Bugfix Patch instead, which includes the fixes from this mod.

This mod needs to be copied to your local mods folder to work. See below.

About:
This mod fixes almost every bug and tooltip error I'm aware of and know how to fix. The enormous damage bug with object masks in RoN:EE is NOT fixed, but is instead fixed in CBP.

For length reasons, full details of each change are in the Discussions.

Mod integration: (these mods have been integrated directly into Misc Fixes)

How to use:
1) Subscribe to the mod. (doing only this will not load the mod)
2a) Locate the downloaded Workshop files. E.g.
C:\Program Files (x86)\Steam\steamapps\workshop\content\287450\2218254050\
2b) Copy the Misc Fixes folder into your Rise of Nations\mods folder. E.g.
C:\Program Files (x86)\Steam\steamapps\common\Rise of Nations\mods\
3) Ensure that the mod is loaded and enabled in the Rise of Nations mod manager (accessible via Tools & Extras -> Steam Workshop).
4) To enable the optional changes, go to the local copy of the mod you've just made and copy all relevant files from the Optional fixes folder into their respective locations in the mod files, overwriting any files as necessary. To restore the originals, just repeat step 2 to restore the original configuration.

Due to a bug with the mod manager, you can't use the load/unload button for this mod. If you need to ensure removal, simply delete (or move) the COPIED files and leave the original Workshop files intact.

Compatibility:
See this thread if you need a rough file list for mod compatibility.

This mod is not well-supported for multiplayer, but will work in some circumstances if all players are using it.

Credits:
Moved to this thread due to lack of space.

Support:
If you like this mod, please consider rating it. If you notice any issues, please let me know so I can fix them!

To support my modding:

EdwardSun Jul 27 @ 8:38pm
I have another question, where can the damage bonus of heavy infantry to cavalry be modified

MHLoppy  [author] Jul 27 @ 1:36pm
@EdwardSun I don't know. You might be able to find the texture it's using (in the /art/ folder) and replace it - but I don't know what it is (and it's not guaranteed that it's using a texture). Otherwise you would probably need to patch the game to remove it.

Please ask in a public place the next time you have a public question https://steamcommunity.com/app/287450/discussions/

EdwardSun Jul 27 @ 11:29am
Hello, I am a Chinese player. I love this game very much, but there is a problem that has been bothering me. In the game, turn the field of vision to the maximum, and a yellow circle will always flash after the building is built. I really want to know how to remove it. I hope you can tell me if you know the method. Thank you very much

MHLoppy  [author] Jul 28, 2021 @ 1:00pm
You need to copy the contents of the Optional Changes folder as per step 4 of the instructions if you want those changes enabled (copy everything there if you want all the optional changes, or just copy the files related to what you want otherwise). I've changed the structure of the core files so that those changes *can* be made, but they're not done by default.

MHLoppy  [author] Jul 28, 2021 @ 11:43am
Yes, that sounds right. An easy way to check that it's working is to load into a singleplayer game and check if the bottom-right header (Rules and Map Info) is centered or not.

♪melody_melon🍉 Jul 28, 2021 @ 11:37am
Yeah, I copied the Misc Fixes to the local file which is entitled "mods." What I actually did was susbcribing to the mod then finding the "workshop" where the Misc Fixes was located. After that, I copied the file and sent it to the "mods" folder as required. Please correct me on this. Thank you in advance!

♪melody_melon🍉 Jul 28, 2021 @ 11:29am
@MHLoppy, oh by the way, I followed the instructions on how to activate it. Do I need to activate this through the mods in Quick Game? It seems that it does not want to appear; however, it said in the Steam Workshop tab that the Misc Fixes are activated.
< >