Store Page
RimWorld >  Workshop > psycheLo's Workshop
This item has been removed from the community because it violates Steam Community & Content Guidelines. It is only visible to you. If you believe your item has been removed by mistake, please contact Steam Support.
This item is incompatible with RimWorld. Please see the instructions page for reasons why this item might not work within RimWorld.
Current visibility: Hidden
This item will only be visible to you, admins, and anyone marked as a creator.
Current visibility: Friends-only
This item will only be visible in searches to you, your friends, and admins. 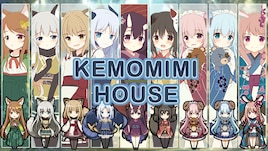 psycheLo
Offline
See all 2790 collections (some may be hidden)

This item has been added to your Subscriptions. Some games will require you to relaunch them before the item will be downloaded.
Description
It is a mod that adds nine animal-ear girls dispatched from a certain self-made game (under construction).
とある自作ゲーム（制作中）から派遣された9人の獣耳少女を追加するmodです。

A white-haired wolf-beast ear ninja girl is roaming the forest after being burnt in a village.
If you find one, persuade it gently and protect it.
You can get fluffy hair by brushing her.
She also picks up beautiful stones to help her master.
You will get a small amount of jade from her every few days.
Konコン

The brown-haired fox animal ear samurai girl is exploring the forest in search of a missing friend in the neighboring village.
Persuading her and welcoming her to the colony would be a powerful bouncer.
She also provides beautiful hair by brushing.
She loves gold very much It seems that you will find it while wandering outside.
You can get a small amount of gold from her for lodging.
Hanaハナ

The red-haired rabbit-eared girl is the daughter of a rich merchant.
Two of her subordinates (important friends)
She heard a rumor that she was being taken prisoner in a colony and rescued her.
If your speaking skill is low, there is a high probability that she will attack.
But please be assured that there is almost no combat ability.
She is very strong and will be very helpful when traveling.
Also, if you trust her, she will bless you with silver on a regular basis.
And finally, she is Tsundere.
Mikoミコ

The cat ears with golden hair have a lonely life in remote areas.
As an onmyoji, she is a feared person because of her mighty power.
She's on the alert because you've built a colony near the forest where she lives.
If you can accept her, it will lend you some of the power.
However, her property value is very high and she is very gluttonous.
Akameアカメ

Sheep girl with pink hair is an apprentice maid working in Hana's mansion.
She is Aome's older sister, but she is a very timid and often crying child hiding behind her sister.
She went out looking for Hana, who was longing for her like her real sister, but she got lost in the woods.
I request the immediate protection of the cute little sister in the universe. from aome
Aomeアオメ

The blue-haired sheep-beast horn girl is a maid apprentice at Hana's mansion, just like Akame.
Unlike her sister, Akame, she is a solid person and has a transmitter attached to Akame, so she knows where she is.
If a fool would hurt her big sister, she would be sanctioned.
Kuroクロ

The black-haired dog-eared girl is an apprentice ninja in a village different from Siro.
She is very fond of Siro and is exploring the missing Siro
She seems to be wandering the desert because She has no sense of direction
Although She is an apprentice ninja, she must be very careful in persuading her, as her combat ability is extremely high.
Yukiユキ

An ice dragonman with strong scales once fought a golden cat and was transformed from a pure dragon into a dragonman.
Since then, no one has ever seen him, but recently on the ice land
Sightings of a girl with a blue dragon tail have been reported.
If you are looking for something, i recommend that you make all the necessary preparations.

With two horns, she is a human with the power of a Oni.
She has the power of a Oni and has been feared and oppressed
With a kind heart, she is not good at using violence and travels alone.
The power of Oni is very strong, and they are especially good at flame attacks.
When it comes to combat, she won't hesitate to protect her friends.
She doesn't lose her posture, but she doesn't want to see her sleeping because she has a bad sleep.

Appearance place
They have a low chance of appearing in various forests.
However, Kuro and Yuki seem to be in very hot and cold places.

Status correction content
Increased their chances of appearing. And they are only one

The movement speed and attack of Kuro and Kohime have been revised downward, and Yuki's attack power has been slightly increased.

The link with animalgear has been canceled, and I think that the stray sleep bug no longer occurs.
Added two people in full armor state.

Additional weapons
You will be able to make replicas of weapons owned by Shiro and Kon.
It can be manufactured from a workbench or an electric workbench, but requires extremely high technology.
Instead, it's very strong.

For nonsteam? Check this if you interested download this mod but you have non steam version
The_Jocker

AmCh Nov 18 @ 9:48pm
A suggestion: the mod's "About" folder should begin with a capital "A".
This seems to not be a problem in Windows, but if you run the mod in Linux, the game doesn't recognize the mod's "about" folder and fails to load.