Store Page
Arma 3 >  Workshop > Operation FrenchPoint's Workshop
This item has been removed from the community because it violates Steam Community & Content Guidelines. It is only visible to you. If you believe your item has been removed by mistake, please contact Steam Support.
This item is incompatible with Arma 3. Please see the instructions page for reasons why this item might not work within Arma 3.
Current visibility: Hidden
This item will only be visible to you, admins, and anyone marked as a creator.
Current visibility: Friends-only
This item will only be visible in searches to you, your friends, and admins. 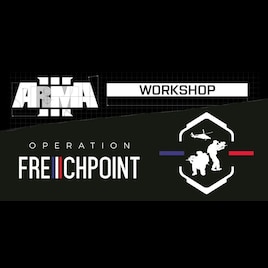 Operation FrenchPoint
Offline
See all 438 collections (some may be hidden)

This item has been added to your Subscriptions. Some games will require you to relaunch them before the item will be downloaded.
Description
Operation FrenchPoint (OFrP)
Current version: 2.0.0
Website: https://ofrp.fr/
Join us on Discord: https://discord.gg/vRAWZ9X
ACE3 Compatibility: https://steamcommunity.com/sharedfiles/filedetails/?id=2084745436

DESCRIPTION
The Operation Frenchpoint project (OFrP) was created in 2002 by the pooling of the expertise of several passionate French modders, animated by the same desire: to develop the units, weapons, equipment and vehicles of the French Army on the ArmA series produced by Bohemia Interactive and to deliver them for free to the community.
For the moment, the mod includes regular infantry, weapons, several objects, and light vehicles (compatible with TFAR and ACRE) but it is an achievement for the team after several years of difficulties.
We gave all our skills/habilities/knowledge and our passion in order to let you play freely and with quality with french units and equipements on ArmA 3.
The mod is not devoid of flows, but we hope you will enjoy to play with it.
The following PDF files are included in the pack:
- README.pdf
- Classnames.pdf
- FR_Licence.pdf
- EN_License.pdf
https://steamcommunity.com/sharedfiles/filedetails/?id=2059431006

END USER LICENSE AGREEMENT (E.U.L.A.)
The work contained in this distribution is licensed under the Creative Commons BY-NC-ND Attribution-NonCommercial-NoDerivatives 4.0.[creativecommons.org] It is forbidden to distribute the content of this package by itself, or as part of another distribution, using the Steam Workshop by anyone other than Operation FrenchPoint Team (OFrP Team). You may NOT use the material for commercial purposes. This includes running this package on server instances that employ any monetization schemes, including, but not limited to, donate-reward systems. Bohemia Interactive’s approval of your monetization scheme does not grant you rights to wave this clause of the EULA. Please note that the above-mentioned agreement gives the right to OFrP Team to waiver any of the conditions at our own discretion. These mods are provided for Bohemia’s Interactive Arma 2: Combined Operations or Arma 3 and is not to be used with VBS or any of its derivatives built for the purpose of military training. It is strictly forbidden for the content provided and/or any derivatives to be use in the DayZ game.
BUG REPORTS
This STEAM page is not monitored by OFrP Team.
Please share your feedbacks, comments or config improvement proposal on our Discord (link at the top of this page).

KNOWN ISSUES
There is no thermal textures.

Owl Sep 5 @ 1:04am
Oh man I cant wait for you guys to add in other vehicles in the future

CplCandyBar Aug 28 @ 12:32pm
I'd hate to be a bother, but is there any chance a OFrP Vehicles mod could be uploaded to Steam by you guys that's just your absolutely outstanding P4s?

BearMilitia Aug 22 @ 1:32pm
This is really cool and its nice you threw in the older armor and helmets but it would be nice to have LBE webbing added to the Vest S3 set to finish it up and have a nice little set of 90s gear

TigerForce  [author] Jul 20 @ 1:27pm
@von Graf
Thanks for your comment.
Unfortunately, and to be honest we have a complete lack of knowledge in sound management and modification. If you have any competences, feel free to join us through our Discord. Help is much appreciated regarding this matter.

von Graf Jul 18 @ 8:35pm
Great mod I already played and liked in A2. Alone for the FAMAS series. Too bad it doesn't fit the JSRS soundscape I'm using in A3, I'd pay for a compatibility file.