Store Page
RimWorld >  Workshop > Linkolas's Workshop
This item has been removed from the community because it violates Steam Community & Content Guidelines. It is only visible to you. If you believe your item has been removed by mistake, please contact Steam Support.
This item is incompatible with RimWorld. Please see the instructions page for reasons why this item might not work within RimWorld.
Current visibility: Hidden
This item will only be visible to you, admins, and anyone marked as a creator.
Current visibility: Friends-only
This item will only be visible in searches to you, your friends, and admins. 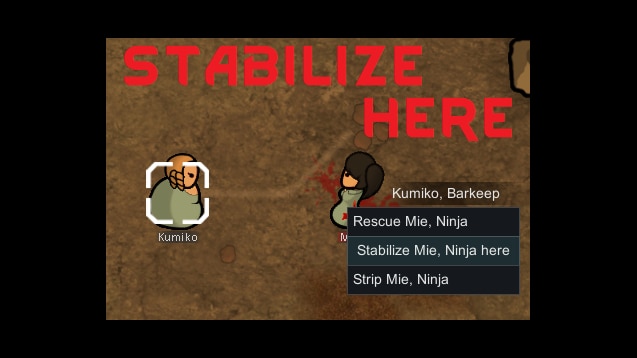 Linkolas
Online
See all 15491 collections (some may be hidden)

This item has been added to your Subscriptions. Some games will require you to relaunch them before the item will be downloaded.
Description
Lets you tend to downed pawns right where they are instead of taking them to beds.
A true lifesaver :)


Doctors won't take the time to search for medicine; this is intended as an emergency action.

The tending action is kept vanilla for its calculations, which means you'll probably have bad tending quality (no medicine used, no bed bonus, probably filth around), but hey! The bleeding has stopped.

Overfox May 28 @ 6:38am
@Ulas I use both mods. When selecting a pawn, you can either choose this mods "stabilize" feature, or the one of CE. Both options will be displayed.

Sego May 23 @ 6:07am
Is there a way to add in doctor worklist so they will do stabilize by themselves if there is no beds?

Itharus Mar 29 @ 1:31pm
Not that I know of. It's working on my end. Worst case scenario just toss it on the bottom and see if that helps. Stabilize should not require any items.

Nouni Mar 29 @ 1:04pm
I no longer have the action available since updating to 1.3. Did anything change in term of load order, required items, etc?

Itharus Mar 25 @ 10:40pm
By default, the vanilla game uses medicine. You either have to restrict the target's medicine allowance to see the "tend without medicine" option, or use a doctor who is carrying none. I'm not actually sure if you can restrict a downed enemy's medicine or not...

Also, if you don't do the above your doctor will just use whatever medicine they are carrying, and they will run off to find more if they run out before they are done! Which you will have to interrupt and then select "tend without medicine".

Or you just drop their medkits on the ground and do it that way.

This mod basically lets you sidestep all of that by making "Tend without medicine" a permanent option called "Stabilize X here".

Alfador Mar 11 @ 7:34am
Apart from having to set the downed pawn´s medicine to none for the now-included vanilla tending to make the doctor actually go in and tend asap?

Stablilize now lets you literally do that, stabiize with atrocious tending quality.

Zeng Xiao Feb 27 @ 7:00am
you can already do this in vanilla if you draft a pawn

NESecretWeapon Dec 4, 2021 @ 9:01am
@NöSTer - Smart Medicine does a lot more than this mod. Possibility more than people want. Some people just want to heal their pawns on the spot without all the other things smart medicine controls
< >