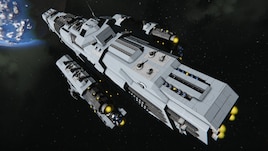 vince.t
Offline
See all 8 collections (some may be hidden)
You need DLC to use this item.

This item has been added to your Subscriptions. Some games will require you to relaunch them before the item will be downloaded.
Description
The bulky Praetorian is a sturdy and powerful vessel. Originally designed as a heavy duty freighter, it was soon repurposed to serve as carrier or command cruiser within the KCL's Corporate Forces. Being a non-military-sanctioned commission the Praetorian is also found in less populated sectors, serving local militia forces as mobile base of operations.

Thanks to its large hangar and adjacent maintenance bay, the Praetorian can carry and maintain a large complement of fighters and utility vehicles. Its weaponry is comprised of a number of heavy cannons as well as a large number of defensive point defense turrets.

References
- Download page for the XWA Version[www.vince-t.com]
- Official BPC Wiki Page[blue-phantom-chronicles.fandom.com] (need to beef that up)

Zahltag Jan 26 @ 5:44am
I think it might have been the fact that i had both mexpex mods, the normal one and the weapon core installed