Store Page
Stellaris >  Workshop > Lylant's Workshop
This item has been removed from the community because it violates Steam Community & Content Guidelines. It is only visible to you. If you believe your item has been removed by mistake, please contact Steam Support.
This item is incompatible with Stellaris. Please see the instructions page for reasons why this item might not work within Stellaris.
Current visibility: Hidden
This item will only be visible to you, admins, and anyone marked as a creator.
Current visibility: Friends-only
This item will only be visible in searches to you, your friends, and admins. 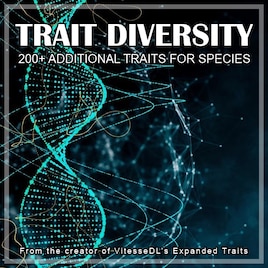 Lylant
Offline
See all 10024 collections (some may be hidden)

This mod adds 220 new species traits to the game:

The mod contains some origin traits which cannot be added or removed after the start of the game. The traits will provide very distinctive attributes/backgrounds for the species and some of them may alter the gameplay remarkably. They are indicated as blue icons.

If you are still using VitesseDL's Expanded Traits, I suggest you to move this mod from VDL since almost every trait in VDL is included in this mod. Yes, you can consider this mod as a sequel of VDL.

Other Compatibility Issue
Note that the mod manipulates and overrides vanilla elements of:
I believe these are quite few changes, the mod should be compatible with most other mods.

[www.paypal.com]
If you really enjoy the mod and wish to support me, you can offer a donation for my work on this mod with a few dollars. Any support is greatly appreciated. Thank you!

Hope you enjoy this mod, please rate it if you like it!
Popular Discussions View All (2)

Maxar 6 hours ago
I think it would make more sense if some of the traits in this mod were government civics instead. The traits that concern entire cultures instead of individuals, such as Flesh and Spirit, Noblesse Oblige, Aristocratic, Lust for power, Right of Succession, and Infanticidal should be moved from traits to the government civics category.

Westrian Jul 8 @ 5:53am
on the other hand, last child origin breaks necrophage lithoid terravore and causes your pops to decline if you purge other species while you have any sort of organic assembly, still trying to find a way around it.

DrukenReaps Jul 5 @ 3:37pm
I find a number of these are too strong. Like Genius or Brilliant even. Then there is Last Child (or something like that) that is just an auto pick 8 free points for any necrophage origin. Plenty of cool creative thought went into this though! Hope you'll keep the work up and try to find some more balance for it.

Ragnin Jun 4 @ 10:06pm
I have an issue where often when I take Theninthrope (sorry for bad spelling) my worker pops just stay unemployed. They keep trying to promote and then demote over and over again. Never taking the open worker jobs or quitting them soon after.

Fire Gaming™ Jun 4 @ 12:17pm
Moop515 , you don't need to use any of the fantasy inspired traits, just ignore them. I personally find a few like the Ignis great for species which might evolve with biological defenses around fire (like the bombardier beetle) or learn to manipulate it by using the shroud/warp/psychic shenanigans

PCR_Anibal Jun 2 @ 4:41am
Hello, Does the AI uses this traits when generating empires?

MuckingAbout May 18 @ 11:41am
Can confirm weeaboo's bug report. As a Necrophage the secondary species does not take Necrophyte jobs. Deactivating this mod fixes it. This is on 3.4, but I had the bug in earlier versions as well.
< >