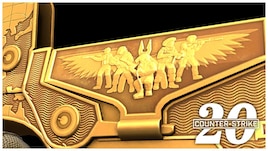 EZIKYL
Offline
See all 34 collections created by EZIKYL and other people (some may be hidden)
In 2 collections by EZIKYL
Ezikyl's CS20 Designs
19 items
CS20 | LEGACY
10 items
Description
Thank you for all your support. I mean it. <3

Twenty Years of Counter-Strike. Quite a span of time for a Competitive First-Person Shooter to remain relevant, and it became clear to me that my entry for the twenty year anniversary event had to reflect what keeps the series thriving even twenty years later: Teamwork and Community. At its core, CS is about the classic five-versus-five games that require team tactics and coordination, and are played on maps often originated from the community themselves - a community that is spread out on every continent worldwide. With this in mind, I set out to represent these aspects on a weapon skin.

One thing I’ve noticed is that guns themselves seem to frequently have commemorative special editions: engraved editions pistols and rifles exist and are released for all kinds of special events. The real heroes in the fiction of CSGO are the Counter-Terrorists, and I wanted to feature them on the design, so of course they’d need to be on a CT exclusive weapon - it’d be a little funny for a Phoenix Connexion member to be walking around with a CT themed weapon he’d bought at the start of the round. Of the Specifically CT weapons in the game, the FAMAS stood out as the most viable choice: it’s mirrored UV offers ample resolution to work with, and therefore it enabled me to create a detailed design.

Teamwork
For the focal point of the design I wanted to represent teamwork, so I modelled up a team of Counter-Terrorists defusing a bomb. I wanted to represent as many factions of the CTs as could fit in a five man squad, and ended up with the FBI, SAS, GSG-9, IDF and ST6, each holding a different class of weapon. The weapons themselves have appeared in some form in every entry in the Counter-Strike series. Behind the Counter-Terrorists I placed a stylised version of the winged clippers CT emblem to fill up the space and create a dynamic shape.

Global Community
For the front of the gun I developed a stylised engraved map of the world, based on Equirectangular projection. This allowed me to put as much of the world map as possible on there, though this did result in a lot of the world being cut off by the gap in the hand guard. On the plus side, this map does still feature New Zealand!

Classic maps to define Counter-Strike
Is there any way to talk about CS without mentioning one of the foundational aspects of its gameplay, the incredible map design? CSGO stands out as one of the competitive shooters of today that still features community created maps, both in and out of operations. I inscribed the names of a number of maps officially available in CS:GOs primary modes, all of which have proven to be lasting classics.

Other notes about the design
Another part of the design which was important to me was creating something that looked good regardless of the specs of the player’s computer - I used a technique called baked lighting to add a metallic look to the gun even in the lowest shader settings. This helps things look 3D even without the normal map, which adds even more pop for those with the graphics settings set to the max.

Anyway, let me know what you think! Which version is your favourite? This event has been pretty fun, it’s been great seeing everyone’s creative designs. Until next time!