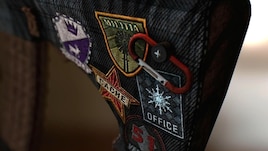 MultiH
Offline
See all 4 collections created by Quzga and other people (some may be hidden)
In 1 collection by Quzga
Quzga's Custom Skins
48 items
Description
One really cool aspect of Counter Strike is how we have maps set pretty much all over the world. So we thought what better way to celebrate CS turning 20 than to make a skin themed around traveling the world through Counter-Strike maps?

We created custom patches based on the map logos which isn't as easy as it sounds considering they're aren't exactly of the highest resolution. We tried to put in a good variation of locations for the patches, and include as many continents as we could. (Sry Asia & Australia)

Based on the patches alone a person would have had to visit Mexico, Germany, France, Italy, Morocco, Ukraine, NYC, Colorado, Louisiana/Texas. That would be quite the traveler! Here's a world map [i.imgur.com]we put together estimating the locations of all Official maps in-game based on general clues from the map designs.

Other than map patches the skins has other features to it. The idea was to basically mimic a backpack so why not create something all backpacks has? A zipper. Luckily the AUG has a nicely shaped area fitting for a zipper right at the top. Also added in buttons on two fitting bolts!

A backpacker is bound to get their gear dirty and rugged, so we added in wrinkles using a normal map and also dirtied down the gun a tiny bit.

Other parts include a red Carabiner which goes hand in hand with backpacking or overall traveling in rough terrain. The AUG just happened to have a metal clip with the perfect shape so a Carabiner felt like an obvious addition.

There's also leather parts with a subtle imprinted design and stitching following the edges of leather parts or where fabric meets metal.

If you guys like it enough we might make more of these, if so feel free to leave any suggestion on guns below! GL to all other CS20 entrants.