Store Page
Tabletop Simulator >  Workshop > Samuelw's Workshop
This item has been removed from the community because it violates Steam Community & Content Guidelines. It is only visible to you. If you believe your item has been removed by mistake, please contact Steam Support.
This item is incompatible with Tabletop Simulator. Please see the instructions page for reasons why this item might not work within Tabletop Simulator.
Current visibility: Hidden
This item will only be visible to you, admins, and anyone marked as a creator.
Current visibility: Friends-only
This item will only be visible in searches to you, your friends, and admins. 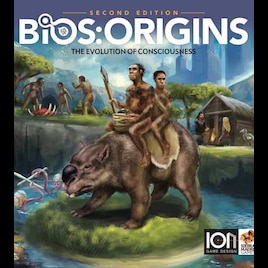 This item has been added to your Subscriptions. Some games will require you to relaunch them before the item will be downloaded.
In 2 collections by Samuelw
Science

43 items
Description
Bios origins is the 2nd edition of Origins - How we became human. The game is redesigned from the bottom up and made to fit into the Bios Trilogy. The theme is similar to the first edition, the evolution of an intelligent species from the time they become self aware until the time they start sending things into space.

The game takes place during the time period from 3 million years ago up until now. Each player represent one of the sub-species of the kind of animal that first developed a more advanced language and embarked on developing into intelligent creatures that spread all over the world. The game ends as they enter space.

You evolve your population both through spreading on a world map (to acquire land and resources) and spreading on the market of visionary thinking (to acquire action possibilities and technologies). The vision market consists of cards ideas from the evolution of humans that you invest in. The game is driven by events that takes place at set times in history and after a certain number of events, or when someone lands on the Moon if that occurs sooner, the game ends. The winner is calculated based on your progression.

This module is scripted for setup and market refresh and next epoch. The table the FlexTable by Mr. Stump.

Enjoy, and please post any questions or comments here or at the Bios Origins thread on BoardGameGeek:
https://boardgamegeek.com/boardgame/235555/bios-origins-second-edition

All assets for this mod (with the exception of the table background) are owned by Phil Eklund/ Sierra Madre Games and John Manker/Ion Games, copyright 2019. They're used with Mr. Eklund's gracious permission.
Popular Discussions View All (1)

We are about to start a Vassal-PBEM. Looking for 1 or 2 players.
https://boardgamegeek.com/geeklist/284384/item/8251860#item8251860
I could play this magnificent game live here in TTS. Any number of players (greater than 1).
But we might need multiple sessions to finish aTTS game.
Discord: Mihalis#8116

Samuelw  [author] Apr 10, 2021 @ 6:53am
Thanks @TimFortress. There are a number of differences in cards between the digital assets provided by ION/SMG Games and what was printed. Please see the discussion regarding Corrections for more informaiton.

TimFortress Apr 9, 2021 @ 11:29pm
hi, your Metal coinage challenge card is incorrect, both sides rainbow should have man icon and purple side is embark 4 icon(which should be embark3 )

I note there is an updated rule book from the website; text on the front page says "Incorporates Living Rules to Aug 2020." The existing in-game rule book is from June 2019.

Samuelw  [author] Jul 6, 2020 @ 9:25am
Thanks for the request Schmel924. I'm working on a Bios Megafauna 2 module. While there will not be a transfer of BMF2 to BO2 game, I do plan on an eventual 'manual setup' for using BMF2 components. Because of the undertaking of BMF2 creation, it will be a while until we add those features.

schmel924 Jul 6, 2020 @ 9:10am
First of all, thank you for providing this wonderful method of playing such a great game.
Is it possible to custom setup with transferring geography from MegaFauna?

Samuelw  [author] Jun 30, 2020 @ 7:46am
Thanks for the suggestion. I've updated the epoch refresh to search for figurines instead of names.
I've also added the ability to draw from remaining epoch cards for J1. Milankovitch Cycles.

Samuelw  [author] Jun 29, 2020 @ 9:34am
That was an interesting problem. The cards were still there, but the decks were combining on load because they were so close to each other. So I changed the comet decks to lock above each other.

Finally, I made the print version (epochs only) available for setup, just delete the digital versions before setup. Thanks all. Like and subscribe.