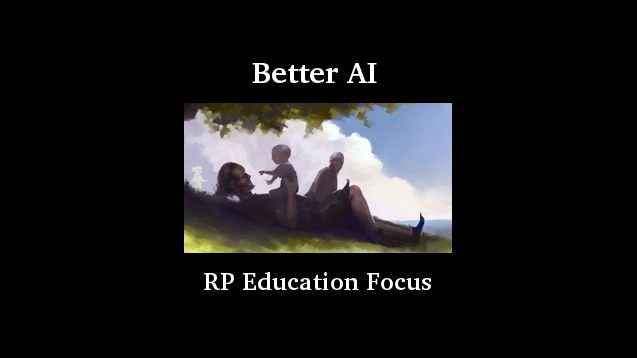 Dragatus
Offline
See all 1229 collections created by Dragatus and other people (some may be hidden)
You need DLC to use this item.

6 items
Description
While the AI in CK2 is not intended to play optimally, it is intended to roleplay. Unfortunately when it comes to picking an education focus for children it does neither and most of the time just makes a random choice. This mod aims to fix that by making the AI pick a childhood and education focus for a child only if certain conditions are met.

COMPATIBILITY
The mod changes the checksum of the game and as a result it will prevent you from getting achievements.

As a result it should be compatible with the vast majority of other mods, with the exception of those that also change these two files.

Overhaul mods such as HIP, CK2+, and AGOT all change these two files, so they probably aren't compatible. However, they all already add additional weights to the childhood focus selection, so you don't really need this mod for them.

HOW IT WORKS
The AI will chose childhood focus for children mostly based on RP and the education focus will then be chosen based primarily on the traits the child has developed with a fallback option based on government type.

Childhood foci:
1) Pride: used for rulers, heirs, and close family members of rulers. A child ruler or the heir will almost always get this. Used less often for girls in agnatic realms and boys in enatic realms.
2) Humility: used for lowborn children and bastards.
3) Etiquette: used for children of a noble dynasty in feudal, republican, and theocratic courts. In agnatic realms it's used more often for girls and less often for boys. In enatic realms this gets reversed.
4) Duty: can be used for any child in a feudal or republican realm.
5) Thrift: used for children in republican realms and in realms ruled by a scholarly liege (Erudite or Scholar trait)
6) Struggle: used for nomads, tribals, bastards, and lowborns
7) Faith: used on infidel children or if liege is theocratic
8) Heritage: used to educate children who have either different culture or different religion than their liege

SHAMELESS SELF-PROMOTION
If you like this mod, you might also be interested in Better AI: Roleplaying Character Focus, a mod that strengthens RP logic in the AI's selection of character focuses (Way of Life DLC). A combined manual download for both mods can be found here[www.dropbox.com]

Finally, I'd be grateful if you could rate the mod with either thumbs up or thumbs down. The button for it is up just below the mod cover image. If you rate the mod wit a thumbs up, please consider also marking it as a favorite.
< >
37 Comments

c39687 Mar 2, 2020 @ 12:06pm
gonna try, thank god, sick of the stupid ai that sometimes get control of my kids when my wife is a ruler or something that pick the worst education for my kids. Hopefully this fixes their stupidity.

Nagisa Fawkes Sep 17, 2019 @ 6:38pm
Oh, wow, I completely misunderstood what the mod was about. For some weird reason, I thought an "AI" would select the focuses for you. I'm sorry about the confusion.

Dragatus  [author] Sep 17, 2019 @ 5:52pm
Well, if it's your daughter you should pick her focus. The mod only affects the children of AI rulers. The education of children in your court is still up to you.
< >