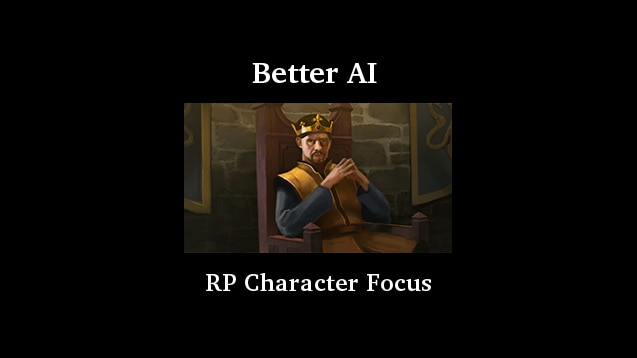 Dragatus
Offline
See all 1159 collections created by Dragatus and other people (some may be hidden)
You need DLC to use this item.

6 items
Description
The AI already roleplays when picking it's character focus. The problem is that there are 10 different foci to choose from so most personality-based the modifiers are too low to make a significant impact. A character who's Just and Diligent may have a 6x modifier to the 'weight' of the Rulership focus, but 6 out of 15 is still only 40%, so 60% of the time the character would pick an essentially random focus.

HOW IT WORKS
This mod simply changes all the personality based modifiers the AI uses to either 10 or 0.1. So that same Just and Diligent character from before will now pick Rulership 100 out of 109 times, or 92% of the time.

COMPATIBILITY
The mod changes the checksum of the game and as a result it will prevent you from getting achievements.

It changes only one file:
1) Crusader Kings II/common/objectives/00_focuses.txt

As a result it should be compatible with the vast majority of other mods, with the exception of those that also change that same file.

Overhaul mods such as HIP, CK2+, and AGOT all change that file, so they probably aren't compatible.

SHAMELESS SELF-PROMOTION
If you like this mod, you might also be interested in Better AI: Roleplaying Education Focus, a mod that introduces RP logic to the AI's selection of childhood and education focuses (Conclave DLC). A combined manual download for both mods can be found here[www.dropbox.com]

Finally, I'd be grateful if you could rate the mod with either thumbs up or thumbs down. The button for it is up just below the mod cover image.
< >
27 Comments

Dragatus  [author] Dec 14, 2019 @ 11:47am
You can edit the mod file to adapt the chance to your own tastes. All you need to do is change all the modifiers from looking like this:

Dragatus  [author] Oct 3, 2019 @ 1:21am
I'd have to see the ATE file and your edit to know for sure. But what is most likely is that you accidentally deleted a } or { bracket at either the end of the Seduction focus or the beginning of the Intrigue focus and that broke all the focuses that come after.

Rulership, Business, and Seduction are namely the first three focuses in the file and they all work normally. So the problem must exist somewhere between Seduction and Intrigue (which is the 4th listed focus in the file).

South Burnouts Oct 2, 2019 @ 3:46pm
I tried editing After the End Fan Fork's 00_focuses.txt to something like this. I have no modding experience but considering I have done made other mods compatible with other overhaul mods, I thought this would be a piece of cake. I failed miserably. Only three of the focuses work: Rulership, Business, and Seduction. Every other focus I cannot choose what-so-ever. It is highlighted with a yellow ring like I had chosen all of them but cannot set one of them as a focus other than the ones I listed. This is my fault but could you be able to find what I did wrong?

All I did was change the modifiers of the ATE file to this one and did not delete any code that was added by ATE. Your mod is a must have and I thought I could make it compatible but ruined the ATE mod itself.

Dragatus  [author] Aug 15, 2019 @ 8:43am
Not sure. It's likely a similar situation as with HIP and the like. So using the two mods is unlikely to cause problems, but it's uncertain which one will take precedence.

Dragatus  [author] Jun 10, 2019 @ 12:55pm
@The_Senate
HIP and my mod both change the same file, but you only get the effect of whichever mod loads last. That's probably going to be HIP because H comes after B in the alphabetical order. HIP also adds some new modifiers that this mod does not take into account. For example, characters with an ambition to become Steward will have an increased chance to take Rulership focus with HIP, but my mod doesn't have that effect.

That said, I'm 99% sure nothing bad will happen if you try to use this mod alongside HIP. It's just unlikely to do anything. So you can try if it works and if it doesn't, there should be no harm done.

76561198032763579 Jun 10, 2019 @ 12:54pm
@JoltSpeed, for me it took steam workshop 2 days from i downloaded them to they registered in my modlist. More than usual, but I believe it is quite common for everyone that the steam download takes some time, and if you start up the game before it is done doing whatever *it* is doing, the mod either won't show up in the modlist, or be there with a red layering, unselectable. But give them a bit time, or unselect them and redo the subscription. I don't think there's any magic that lets people not experience this.
< >