Store Page
Arma 3>  Workshop > swurvin's Workshop
This item has been removed from the community because it violates Steam Community & Content Guidelines. It is only visible to you. If you believe your item has been removed by mistake, please contact Steam Support.
This item is incompatible with Arma 3. Please see the instructions page for reasons why this item might not work within Arma 3.
Current visibility: Hidden
This item will only be visible to you, admins, and anyone marked as a creator.
Current visibility: Friends-only
This item will only be visible in searches to you, your friends, and admins. 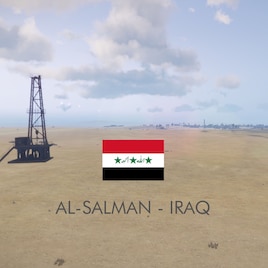 swurvin
Offline
See all 272 collections (some may be hidden)

This item has been added to your Subscriptions. Some games will require you to relaunch them before the item will be downloaded.
Description
On 2 August 1990 the Iraqi Army invaded and occupied Kuwait, which was met with international condemnation and brought immediate economic sanctions against Iraq by members of the UN Security Council. Together with the UK prime minister Margaret Thatcher, who had resisted the invasion by Argentina of the Falkland Islands a decade earlier, American President George H. W. Bush deployed US forces into Saudi Arabia, and urged other countries to send their own forces to the scene.

This is a terrain that I made for a campaign in Iraq during the 1991 Gulf War for special forces missions and SCUD hunting. Now releasing since it's not being used anymore.It was made within about two weeks along with the objects with a real world heightmap and satellite image. It was made for infantry combat and foot patrols inside a city environment. The map includes some custom Saddam murals and posters to set the scene, the town itself is only based on the shape of the real life location and not made to replicate the real town in full detail.


- 5 cell size.
- 10x10km in size.
- Urban bazaar with compound combat in mind.
- Large city with a muslim graveyard.
- Based on the real area around Al-Salman.
- Custom Saddam murals and posters.
- Now set in 2003 but can be used for any time period.
- Micro-terrain for desert combat.
- Created specifically for infantry patrols, mechanised and tank combat.
- Vast oil-fields to the south
- One airbase situated on the north east corner.

It's great for mechanised and tank warfare, SAS patrols and infantry unit patrols inside the main town area. I tried to keep everything compact for the type of urban warfare that you see in Iraq with compounds, alley ways and paths winding all over the place.


Beware of the brightness in the middle of the day, it can be quite blinding in certain conditions. I will look into fixing this but until then just set the time to morning or later in the day.

Big thank you to Opteryx for allowing me to use his old object pack.

swurvin  [author] Feb 27 @ 7:21am
@Roland Do you know which building exactly? Classname?

Roland UA Feb 27 @ 3:13am
I love it. Cool, really.
But there is one bug: if a building with satellite antennas get damage - they texture drops. Just one hit, one shoot and the original texture change to the black shadow.

FreedomFighter55 Oct 2, 2020 @ 7:35am
Hey man, I'm working on putting together a mission based around the battle of Basra and I think this map is perfect just wanna make sure you're cool with the community using this map for their own mission means

Dr. Death Sep 20, 2020 @ 6:35pm
I strongly suggest you to keep working on the map more. It might be just a quick and dirty job but i really like the simple city in desert design, i hope you can make a more claustrophobic and bigger city if you keep working on it.

Great map, but there is an issue with the PictureMap beeing a screenshot. Its recommended by BI to use a satellite map since it is used by some parts of the game and mods. As an example, with the Hatchet H-60 mod you are currently flying around the "screenshot" on the moving map in the cockpit.

swurvin  [author] Jan 9, 2020 @ 10:31pm
@Griffin It's up to someone to create compatibility afaik. ALIVE uses location names from the terrain in order to spawn units no?
< >