Store Page
Divinity: Original Sin 2>  Workshop > Brum's Workshop
This item has been removed from the community because it violates Steam Community & Content Guidelines. It is only visible to you. If you believe your item has been removed by mistake, please contact Steam Support.
This item is incompatible with Divinity: Original Sin 2. Please see the instructions page for reasons why this item might not work within Divinity: Original Sin 2.
Current visibility: Hidden
This item will only be visible to you, admins, and anyone marked as a creator.
Current visibility: Friends-only
This item will only be visible in searches to you, your friends, and admins. 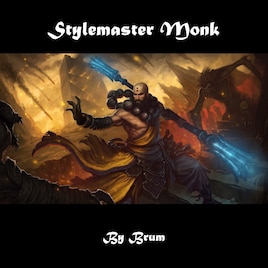 Brum
Offline
See all 486 collections (some may be hidden)

This item has been added to your Subscriptions. Some games will require you to relaunch them before the item will be downloaded.
Description
The Monk is a master of Martial Arts, dedicated to shifting between different Combat Styles. Landing offensive Monk skills generates Ki, which is then consumed to enter a stance. Each different Style grants passive strengths and weaknesses, as well as allowing the Monk to use unique Style Attacks. Monks wield staves, including the newly-added Monk staves, which deal physical damage, scaling with Intelligence. By shifting from stance to stance, the Monk boasts a highly versatile skillset, heavy on utility. Effectively utilizing Ki requires proper cooldown management and constant aggression, making for a high-risk, high-reward playstyle.

Act 1: A basket of Monk skills can be found among the shipwreck on the beach at the start of Act 1, and a vendor can be found just to the right of the FJ Square Wayshrine.

Act 2: A vendor can be found just outside the tavern in Driftwood.

Act 3: A vendor can be found amongst the other Monks in the Elven Temple.

Act 4: The final vendor can be found just inside the market of Arx.

Disarm - Deliver a swift strike to an opponent's arm, knocking the weapon from their hand and dealing damage. Generates Ki.

Flurry of Blows - Rapidly strike 5 times at a target, as well as all nearby enemies, each attack dealing damage based on weapon. Generates Ki.

Leg Sweep - Perform a low, sweeping attack with your staff, knocking down and damaging your target and other nearby enemies. Generates Ki.

Chi Touch - Channel your inner Chi to soothe the mind of a nearby ally (or yourself), healing them for and removing Charmed, Blinded, Deaf, Maddened, Enraged, Taunted and Feared.

Provoke - Call out and challenge an enemy, taunting them for 2 rounds.

Drunken Master Style - Drink a special brew, taking on the haphazard stance of the Drunken Master. Recover 20% of Maximum Vitality and gain a heightened Drunk condition, increasing Dodge, Physical Resistance, and Luck, but reducing Initiave, Intelligence, and Accuracy. Requires Ki.
Keg Toss (When using Drunken Master Style) - Hurl a keg of beer at the target location, dealing physical damage, dousing flames, and intoxicating all targets in the center of the explosion.

Blackout Strike - Bring your staff down on a target's skull, dealing significant damage and knocking them unconscious for 2 rounds. Generates Ki.

Keg Smash - Smash a small keg of highly potent brew at a nearby target, dealing damage, reducing their Fire Resistance, and setting Drunk.

Breath of Flames - Fill your moth with a highly-flammable brew, then ignite it in a cone of flames. Deals fire damage and sets burning.

Swan Style - Assume the protective stance of the Swan, granting bonuses to Leadership and Accuracy, and attacking the first target to pass near the Monk, at the cost of Initiative and Maximum Vitality. Requires Ki.
Swan Dive (When using Swan Style) - Leap to a friendly target, increasing their Physical and Magic Armor.

Bat Style (Warfare/Necro) - Assume the parasitic stance of the Bat, gaining Lifesteal and Critical Chance, and creating a puddle of blood at your feet, but blinding you if your Magic Armor is depleted. Requires Ki.
Diseased Fang (When using Bat Style) - Soak your staff in diseased blood before quickly striking out at a foe, dealing piercing damage and spreading the disease. Generates Ki.

Dragon Style (Warfare/Pyro) - Assume the fiery stance of the Dragon, gaining a bonus to Pyrokinetic and Fire Resistance, at the cost of Water Resistance. Ignites or melts all nearby surfaces. Requires Ki.
Explosive Punch (When using Dragon Style) - Strike an enemy with explosive force, dealing fire damage to the target and all characters in a 4m radius. Generates Ki.

Storm Style (Warfare/Aero) - Assume the thunderous stance of the Storm, increasing Aerothurge, Initiative, and Air Resistance, at the cost of Earth Resistance. Requires Ki.
Thunderous Blast (When using Storm Style) - Strike the ground with potent electrical energy, blasting a cone of thunder, damaging all characters in a cone.

Relentless Assault (2SP) - Quickly dash between up to 5 targets in a large radius, damaging and dazing them with ludicrous speed.

Touch of Death (2SP) - Channel volatile Chi energy and touch a character, dealing Pure Damage and attempting to execute the target. If the target dies they explode, dealing pure damage and executing all nearby enemies below 25% Vitality.

Phoenix Style (3SP) - Assume the legendary stance of the Phoenix, gaining Fire Immunity, AP Recovery and Initiative, increasing damage dealt by 25%, while igniting all nearby surfaces and enemies. Requires Ki.
Sacrificial Rebirth (When using Phoenix Style) - Sacrifice your own life to fully heal all nearby allies.

k1ttensausage Feb 24, 2021 @ 2:39am
Love the mod, but i'm wondering if you have any plans to add any unarmed options... maybe invisible fist weapons?

katanainfinate00 Jan 26, 2021 @ 8:10pm
i'm using a mod that makes magic staffs attack at range, will your monk staffs be affected by this or work normally?

Brum  [author] Dec 17, 2020 @ 11:17pm
Thank you! Sorry for the late reply. The damage build we were talking about relies on using Mantis Style in conjunction with other crit-boosting abilities to exceed 100% crit, then hitting Mantis Strike to reduce target's physical resistances and then following it up with something like Flurry of Blows for 5 crits to delete an enemy. Like a lot of the potential builds with this class, it takes time to ramp up, but when it comes online you can deal outrageous damage.

I believe you unlock the hybrid stances at level 9, though I could be off; it's been a while since I revisited this unfortunately.

Askia Dec 7, 2020 @ 8:09am
I love this mod, thank you! Any tips on how to do the damage build that you and Downpick were talking about? Also, when do you unlock the hybrid forms? I have an Airbender-esque idea utilizing Odinblades Aerothurge mod with Windweaver skills. Basically wip around the battlefield with wind abilities to get in and attack in Mantis Style.

My only critique is that I wish it didn't cost chi to enter a form, but the form ability cost chi. It's a little tedious to run all the way to an opponent and attack them just to enter your first form.

Brum  [author] Sep 8, 2020 @ 10:09am
The monk's abilities actually all scale with the stat of their equipped weapon (a la warfare skills), and have a requirement of using a staff, meaning monks are (by design) locked into an intelligence build, as there are a lot of strong defensive abilities included with this class, and light/no armor is a staple of the various Monks I built this after. I can potentially do a less-restrictive patch for those unconcerned with overtuning, but it'll likely be some time because I do not currently have access to my original mod files. I'd also like to fix the first vendor's dialogue, and fix one ability that's accidentally scaling with strength.

Scribe Sep 6, 2020 @ 8:34pm
Reading through the comment history I saw a mention that you may do an update or rework that would change the class to work with other weapons, like the Spear. Any plans to still do this? It feels like it would make more sense for a monk to be a Finesse based class over one that needs to points into Intellect to use Staves AND Strength for their abilities when you could have made the skills work with finesse and allow them to use Spears. That's just my input and opinion though.

Brum  [author] Sep 1, 2020 @ 12:14am
It currently works with any staff, including the base staves in the game, but not strength/agi scaling 2handers. The Monk vendors sell physical damage staves with the Ki Strike ability, but you can fully build a more magic-oriented monk with a regular staff. There's a hybrid stance for every magic school (except summoning).