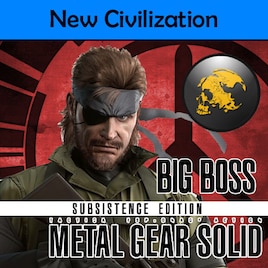 This item has been added to your Subscriptions. Some games will require you to relaunch them before the item will be downloaded.
In 1 collection by Vicevirtuoso
Vice Virtuoso's Metal Gear Solid Civilizations

6 items
Description
Please use Steam Workshop Downloader[steamworkshopdownloader.com] to download this mod if you are having difficulty downloading it via Subscribing.

Mod compatibility:
This mod replaces UnitPanel.lua. Only one mod can load replacements for these files at a time.

REQUIRES BRAVE NEW WORLD -- No Vanilla version will be made. GAK is incompatible, but the standard version of the mod is GAK compatible.

Adds the Militaires Sans Frontiéres Civilization, led by Big Boss. It has a significantly different playstyle from most Civilizations. Like Venice, it cannot build Settlers nor annex cities. Unlike Venice, it does not have a means of acquiring City-States instantaneously -- leaving conquest as its sole route of expansion. It also is no longer capable of purchasing with Gold in Puppet States (a change from previous versions). 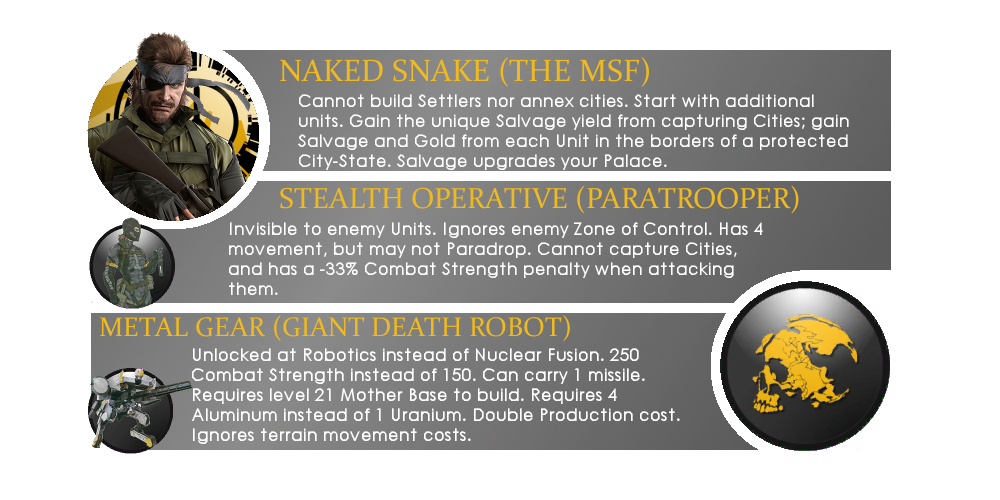 Daniel-Shakes Nov 24, 2021 @ 12:50pm
I can't download either via the subscription and the workshop downloader, anyone can help?

Myraseth Mar 24, 2021 @ 2:08pm
Oddly enough, in games after I added JFD's Mercenaries mod (https://steamcommunity.com/sharedfiles/filedetails/?id=514655444) , I've not been able to upgrade my units with Salvage; the option just isn't there. Any reason why this is a conflict?

Savy NEAL May 31, 2020 @ 2:52am
Thanks for pointing me in the right direction, but there is so much stuff I have no idea where to look for. Am I correct in looking for it in the Table Browser tab? I can't find anything relevant anywhere.

Vicevirtuoso  [author] May 30, 2020 @ 6:09pm
You can with Firetuner. You can get this by installing the Civ 5 SDK from your Steam library's Tools list.

TLR Damanation Mar 24, 2020 @ 12:14am
I know it isn't going to happen, but i would love for this to be fixed to be multiplayer compatible

Trego Jan 10, 2020 @ 3:32pm
So I've done a playthrough with this mod already but for the life of me cannot figure out how to max out Mother Base with the salvage, or use salvage to upgrade my units out in the field, along with unlocking Outer Heaven as a faction and Metal Gear Zeke. What is the max level for Mother Base needed?

Zam138 Jan 25, 2019 @ 10:26pm
With 41 starting city-states on level 3 difficulty (to play the civ for the first time) and pledging to every one of them, I managed to get every wonder except for Petra and the Great wall, and took Rex to 1030 combat strength before finally lifting off from the charred husk of a nuclear wasteland called a planet. It took over 100k salvage every turn, and with the UI I couldn't even see the widget anymore.
10/10 would nuke with Rex again.
< >