Store Page
RimWorld>  Workshop > dninemfive's Workshop
This item has been removed from the community because it violates Steam Community & Content Guidelines. It is only visible to you. If you believe your item has been removed by mistake, please contact Steam Support.
This item is incompatible with RimWorld. Please see the instructions page for reasons why this item might not work within RimWorld.
Current visibility: Hidden
This item will only be visible to you, admins, and anyone marked as a creator.
Current visibility: Friends-only
This item will only be visible in searches to you, your friends, and admins. 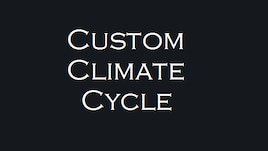 This item has been added to your Subscriptions. Some games will require you to relaunch them before the item will be downloaded.
In 1 collection by dninemfive
dninemfive's mods

13 items
Description
Adds a new climate cycle setting allowing customization of every aspect, from period to temperature offsets, plus the ability to set up a runaway scenario. Access it through the new "Custom Climate Cycle" scenario part.

Why?
This is the more modular spiritual successor to my old Cold Climate Cycle mod from B18. For B19 I used Mehni's Climate Cycle++, which is a good mod but didn't let me have the exact climate cycle I wanted, one with a standard sine wave and overall cooler temperatures but not runaway in either direction.

Variables
Formula:
(Mathf.Sin((GenDate.YearsPassedFloat + (float)ticksOffset / (float)GenDate.TicksPerYear) / PeriodYears * tau) * tempOffsetFactor) + tempOffsetOffset + (xCoeff * GenDate.YearsPassedFloat)
- Period offset: how many years into the cycle the game will be when it starts. Default 0, and can be randomized.
- Period: how many years the cycle takes to go through. Default 4.
- Temperature offset factor: The magnitude of the sine wave. If the temperature offset is 0, this is the maximum variation from normal temperatures. Default 20.
- Temperature offset: Lets you modify the default yearly temperature. Negative values make the whole cycle colder, positive ones make it warmer. Default 0.
- X-coefficient: a modifier which lets you set runaway warming or cooling. Negative values make temperature trend colder over time, positive ones make it trend hotter. Default 0.

Notes
- You need to use the new "Custom climate cycle" scenario part; simply adding a custom climate cycle as a standard game condition will work, but it'll be the same as a normal climate cycle.
- You should be able to layer multiple Custom Climate Cycles to get non-sine behavior if you want to go through the effort, and by zeroing out the temperature offset factor, temperature offset, and x-coefficient you can do things like balance the game's overall temperature (making a warmer or cooler planet) or simply make temperature increase/decrease over time without a cycle.
- No mod compatibility issues are expected; this doesn't modify any base game code.

Birds Aren't Real Jul 31 @ 3:28pm
Hello, when I try adding it in the scenario editor, I do not see an option. I see 2 different "climate cycle" options, but neither of them let me configure anything. Neither of them are called "custom climate cycle."

In what part of the mod list am I supposed to put this in? Willl changing the order fix this?

Birds Aren't Real Jul 31 @ 2:44pm
I am SUPER glad to find out this mod exists. You are a smart person for thinking of this idea! I hope that it gets updated in the not so distant future. :)

jupiterLILY Jul 28 @ 11:45am
I just want you to know, in the most low pressure way possible, that I love this mod and I'm excited for your rework if/when you get around to it.

And yeah, most 1.2 mods should already work on 1.3 without issue, the changes made were really focused on certain areas most mods don't touch.

切れ間ウォーカー Jul 22 @ 12:31pm
I was being dumb anyway, because i forgot I set it to a 4 year cycle and just happened to look at the outside temp like 4 times and each one was 75, this appears to work just fine actually on 1.3