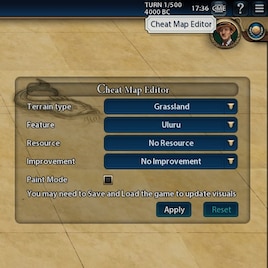 This item has been added to your Subscriptions. Some games will require you to relaunch them before the item will be downloaded.
In 1 collection by Zur13
Zur13 Cheat Mods

Accessible via a new button in the top right corner of the window near the Civilopedia button.

Works with GS R&F and vanilla.


Sorry I'm not able to answer the questions. I will try to give answers to the most common questions in the Please note and FAQ section.

Steam has a limit on the text length on the mod description so I've moved the Notes and FAQ section to the mod discussion tab.

The problem with crashes is that they happen on some turn later in-game and it is not possible to continue the game because it will repeat on that turn no matter what you do. The only way is to load the save game made before the problematic change was done but the crash may happen 400+ turns later and you literally can lose all progress.

Mod uses game testing and map generation functions to make map changes. These functions are used by the game on the map generation stage before the game starts. The game was not designed to use these functions in mid-game after the players and AI appears on the map and this is the main reason for the crashes. It was not changed with the mod updates and if you start to get crashes after some mod update it does not related to this update in 99% of the cases it just your game went to the stage where the significant map updates are not safe anymore.

In general, it is pretty safe to make changes early in-game on the first turn (except the impassable-to-passable and water to lands and vice versa).

So now I'm running long tests to find the functions which might cause the crashes. The current test results are listed bellow.

Unsafe functions (risky because no long-run tests were done, no crashes detected, only short tests was made 6 turns)

Liringlas Jul 2 @ 7:51pm
lake is the same terrain as coast sea in the map editor. I guess it depends on whether there is ocean further or not

whales! Jun 5 @ 6:27am
When I add coast/lake tiles, it changes on the tooltip and minimap, but does not change on the actual map - has anyone encountered this?

whales! Jun 5 @ 6:07am
Has anyone used this successfully to remove hills to build a canal? i.e. if you remove hills with this mod, will it allow canal building? Or is still blocked in the underlying file?

Melkor Unchained May 20 @ 4:59pm
This is a problem with a couple of resources, but I'll use deer for example. Deer can spawn on tundra/tundra hills terrain, and on woods feature. The woods can be on grassland for instance, and it can spawn deer. However, with CME I can only add deer to tundra terrain, not a grassland with a woods. I can still add deer to woods, but the woods has to be on tundra.

Kasabian May 19 @ 2:36am
Mod still works. Save game on turn 1 and reload to spawn the CME button at top right. Currently at turn 200 and no crashes, only made safe edits on first turn.

ChrisMartin May 7 @ 10:14pm
Suggestion: Start the game with Cheat Menu For Units by Zur13, and roam the map with your starter unit in turn 1, and find the best spot. Then move all your units after. (Or just spawn new unit in with that Cheat-mod) Yes, you can't move on coast tiles, but play on Continent map, you'll be good. Then you don't have to edit the map, that could result in unstable game, later on.