Store Page
ARK: Survival Evolved>  Workshop > Myrmecoleon's Workshop
This item has been removed from the community because it violates Steam Community & Content Guidelines. It is only visible to you. If you believe your item has been removed by mistake, please contact Steam Support.
This item is incompatible with ARK: Survival Evolved. Please see the instructions page for reasons why this item might not work within ARK: Survival Evolved.
Current visibility: Hidden
This item will only be visible to you, admins, and anyone marked as a creator.
Current visibility: Friends-only
This item will only be visible in searches to you, your friends, and admins. 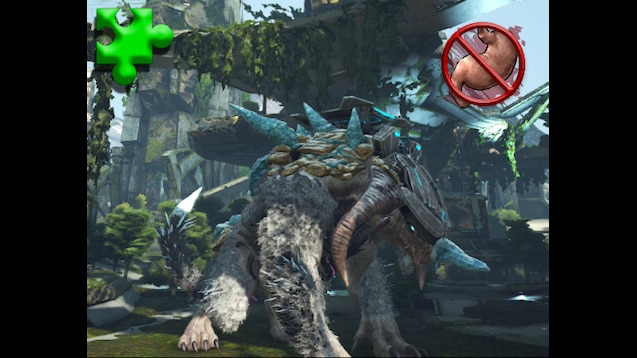 This item has been added to your Subscriptions. Some games will require you to relaunch them before the item will be downloaded.
In 1 collection by Myrmecoleon
Garbage

This mod allows permanence of Extinction’s Titans, preventing them from starving to death and allowing them to be uploaded multiple times. Be aware that only one of the same type of Titan can exist on the map at a time, resulting in one Titan blocking all attempts at fighting or taming another of the same type.

This mod does NOT edit the Titans themselves (no remaps) and works entirely through a buff. You will not lose your Titans when removing this mod, and existing Titans can be affected by this mod. The buff is persistent and will not be removed when the game is restarted.

This mod adds two items: The Life Extender and the Life Compressor.
The Life Extender adds a buff that constantly adds food to the Titan, preventing any decrease in food. The buff is visible while active, and the buff cannot be applied to anything other than the 3 tameable Titans. If the item is used on a Titan that has been downloaded, it enables it to be uploaded again and sets the max food to the default value instead of 0. You will need to re-apply the buff every time it is downloaded as buffs cannot persist through uploading. Note that this does not reset the per-map Titan download cooldown.

The Life Compressor removes the buff, and the Titan will begin slowly losing food as normal. This does not revert the max food value or ability to be uploaded again on a Titan that was previously downloaded, however uploading and downloading it again will “fix” this.

Both items are unlockable at base level and require 1 Element to craft. Crafting cost can be adjusted with the ConfigOverrideCraftingCost ini config setting, but this is meant to be a bug fix/alternative to a lack of ini config and not a new mechanic, so the cost is intentionally low.

For live updates and info on what i’m working on, I have a Discord Server[discord.gg].

Non-Flyer Downloads on Aberration - Allows all non-flyers to be downloaded on Aberration without the need for the foreign dino config.

is there a king titan you can i looked it does not look like there is anything about the king titan so can you make the king titan i dont know if its possible or not but can you try?
Dinofly
< >
107 Comments

Arianna Rodex 8 hours ago
I figured it out! I spawned my Titans in as high lvls (100+). I think the stat craziness messed them up. I spawned them in as lvl 1 (which I think is the default for them anyway) and now they're fine. :) Thought I'd make that note in case anyone is having issues with theres.

Myrmecoleon  [author] Sep 22 @ 5:40pm
This mod has no effect on Titanosaurs, i've heard of odd things happening with platform creatures like the 0,0 thing but I don't think that's something I can change on my end. Mod just adds a buff that prevents food drain for the most part.

Arianna Rodex Sep 22 @ 4:17pm
Any ideas? I do play on The Centre but still with the enable raid tinos setting turned on one would think they'd be fine. They don't die; they just bug out on server reset.

Arianna Rodex Sep 17 @ 7:01pm
On my private server whether I use server settings or this MOD, the Titans (even just Titantasaurs) will stay 'alive' yet then after a day bug. When you mount their saddle, it won't even show....and if you dismount you are sent to 0,0 on map. Any idea how to fix this?

Myrmecoleon  [author] Sep 8 @ 10:37am
The health reset is from vanilla, not part of this mod. Happens on restarts regardless as the health increase is not properly re-applied.

Exstinctor [GER] Sep 8 @ 4:18am
I can't decide at all which mod to use. Either my titans are completely brain dead or they are reduced in their class from Alpha, Beta to Gamma after every server restart. Thanks for trying. It doesn't help me to permanently own titans who cannot defend themselves, or who are extremely weakened by the mods. The only possibility would be to sit on the Titan and enter "cheat infinitestats" which completely fills up the stats. I have to do that every day, but it's still better than losing the Titan AI or weakening the Titans.

Hydro Jul 20 @ 11:01am
Out of curiosity was the Alpha stat reset on restart fixed by this mod or WC yet? I will be keeping the Titans in a Soul Ball for now just in case.

OldGamingNinja Jul 15 @ 8:19am
I have a question, is there a way to make the titan heal? We just got one and after the initial healing buff its at 307k health and its no longer healing. Does the life extender heal or just prevent it from starving?

StarrDuskk Jul 13 @ 11:48am
On a cluster, should I put this mod on ALL maps on the cluster just to avoid the cluster hop "loading mod" issues if it's not all the map you're coming from? Is there a problem having it on all maps or reason not to?
< >