Store Page
Total War: WARHAMMER II>  Workshop > Nox's Workshop
This item has been removed from the community because it violates Steam Community & Content Guidelines. It is only visible to you. If you believe your item has been removed by mistake, please contact Steam Support.
This item is incompatible with Total War: WARHAMMER II. Please see the instructions page for reasons why this item might not work within Total War: WARHAMMER II.
Current visibility: Hidden
This item will only be visible to you, admins, and anyone marked as a creator.
Current visibility: Friends-only
This item will only be visible in searches to you, your friends, and admins. 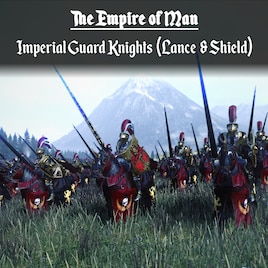 Nox
Offline
See all 144 collections created by Nox and other people (some may be hidden)
You need DLC to use this item.

This item has been added to your Subscriptions. Some games will require you to relaunch them before the item will be downloaded.
In 1 collection by Nox
Nox's Total War: Warhammer II Mods

Welcome everyone!
This is the mounted Version of my Imperial Guard unit. This mod adds the mounted "Imperial Guard Knights (Lance & Shield)" unit to the Empire faction. These heavily armoured knights have the ability to crush the empire's enemies in a devastating charge while inspiring and strengthening nearby allied troops.

The dismounted version can be found here: Imperial Guard

I hope you enjoy playing this mod but let me know if you spot any mistakes and of course i welcome any constructive feedback to help me understand what's good and where things could be improved.

1. General Description:
This mod adds a new unit to the Empire of Man:

"The Imperial Guard of Reikland is recruited directly from the most elite knights of the Reiksguard Order. They only leave their garrison at Altdorf during the most dire times and usually serve as bodyguard to their emperor in great battles however there are some known cases when the emperor sent them out to fight alongside another army as a sign of his personal support. Their ornamented armour and blood red capes can easily be spotted on the battlefield and serve as a beacon of inspiration to nearby troops. "

Recruitment:
They can be recruited at the Altdorf (Rank V). Additionally an Armoury is required to be able to forge their weapons and armour.

They can be recruited by the following factions:

2. Base Stats:
Their base stats are as follows:

3. Technology and Skills:
The unit is fully integrated into existing technologies and lord skills. They will benefit from the following skills and technologies:

4. Available Submods:
The following submods are available for this unit:

My other Mods:
I hope you enjoy using this mod. If you do, then there is more to discover!

You can find all of my mods for Total War Warhammer 2 in this collection:
-> Nox's Total War - Warhammer II Mods

123 Aug 10 @ 12:45pm
hi. Absolutely gorgeous mod (I use every unit mod u did) just one question. I'm tweaking some stats using the pfm but I cannot find how to change the speed of the horses (like 80 or something like this). Its on battle entites right? but I cant find the table. ty

Generallisimo_Penultimo May 23 @ 1:38am
Is there an update. as warden & grom the paunch dlc, all your mod had caused crash.