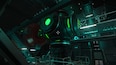 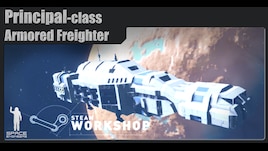 This item has been added to your Subscriptions. Some games will require you to relaunch them before the item will be downloaded.
Description
This ship is an armed Freighter of roughly 150m length. Sluggish but sturdy it is used by corporate security forces to haul sizable freight of value and/or to escort freight convoys across unsafe territory. As such, it carries a number of defensive gatling turrets but no offensive weaponry. The crew quarters offer cryo tubes for up to 15 crew.