Store Page
Crusader Kings II>  Workshop > cybrxkhan's Workshop
This item has been removed from the community because it violates Steam Community & Content Guidelines. It is only visible to you. If you believe your item has been removed by mistake, please contact Steam Support.
This item is incompatible with Crusader Kings II. Please see the instructions page for reasons why this item might not work within Crusader Kings II.
Current visibility: Hidden
This item will only be visible to you, admins, and anyone marked as a creator.
Current visibility: Friends-only
This item will only be visible in searches to you, your friends, and admins. 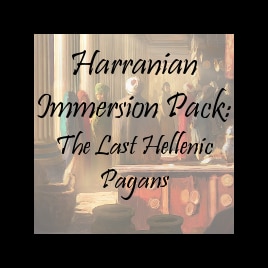 This item has been added to your Subscriptions. Some games will require you to relaunch them before the item will be downloaded.
In 1 collection by cybrxkhan
Cybrxkhan's Immersion Pack Library

6 items
Description
Harranian Immersion Pack: The Last Hellenic Pagans (Updated 7/13/19)
Please see the forum thread[forum.paradoxplaza.com] for more info on Cybrxkhan's Immersion Packs
Manual download available here on Github[github.com]
Go to the official Collection to download all the Immersion Packs (when there are more that is)


Many do not know, but it is possible that the last Hellenic pagans were not the impoverished mountain peasants of the Peloponnese, but the cosmopolitan denizens of the city of Harran. For centuries, the pagans of Harran - erroneously confused with the Sabians in the Quran - have continued to worship a curious mix of Mesopotamian and Hellenic deities, and they even housed the remnants of the Neoplatonic Academy. Several Harranians famously served at the court of the Abbasids, and the temple in Harran may have been used as late as the 1000s (though this may be exaggeration).

In this Immersion Pack, you'll have the opportunity to interact with these pagans of Harran. In your hands is the fate of the Neoplatonic Academy, where wise men keep ancient learning alive, and the Temple of the Moon God Sin, where devotees have been praying for millennia. See to it that these pagans, a dwindling vestige of Hellenism, thrive, or as is inevitable, fade into the distant memory of the past.

Features:
For a full explanation of features, tips and tricks, see the Harranian Immersion Pack Guide![docs.google.com]


As a side note, I know it’s a huge stretch to make Edessa pagan, but it’s honestly more sensible than making Monemvasia pagan, since Harran was a huge major city rather than a bunch of isolated villages in the middle of nowhere. There’s a lot of controversy and uncertainty in the scholarly community about the Harranian pagans (and a lot of bunk and wishful thinking in more mainstream, New Agey type places online). For more scholarly information on the Harranians, please see Tamara Green’s The City of the Moon God: Religious Traditions of Harran.

IF YOU ARE RUNNING SWMH AND WANT TO PLAY AS THABIT IBN QURRA, YOU MUST MANUALLY TRIGGER THE EVENT BY TYPING "event monogatari.117" IN THE CONSOLE.


What Are Cybrxkhan's Immersion Packs?
Cybrxkhan’s Immersion Packs are a collection of small, modular mini-mods designed to add some fun to various, often neglected cultures and regions. These Immersion Packs were loosely inspired by EUIV's, and generally include some flavor events and simple mechanics. While I strive for as much historical authenticity as I can, I will make many compromises as needed to increase flavor and fun.

For those who don’t know me, I was the creator of CPR and VIET, part of the HIP collection of mods, though I no longer work on hat since my retirement a few years ago. Some of stuff here I’ve done for my own personal pleasure over the years after retirement. Consider them a spiritual successor to my VIET Immersion mod, on a smaller scale.

I won’t be making a lot of stuff like I used to; I don’t have time nor energy. Thus, THESE MODS ARE OFFERED AS IS AND I WILL NOT COMBINE THEM INTO ONE MOD. I am only sharing them now as a resource for modders and for those who want a bit of flavor in their games and/or are old VIETerans who miss the good old days. I’ll only go back or add stuff to these packs when I feel like it or if there are bugs.

Please see the PI forum page for more, or the Steam workshop collection to download all of them.

Please feel free to use my mods in your work, all I ask is that I am credited.

Gunteraz Nov 10, 2019 @ 9:55pm
Hello!
First off, great mod! Thank you!
Secondly,
There's a couple of little bugs with the Bloodline that the mod adds. Because base game does not have erudite_opinion and mystic_opinion as allowed modifiers due to them missing from the 00_modifier_definitions.txt file in the modifier_definitions folder the bonuses to those things from the bloodline dont work. To fix this you should make your own little modifier definitions file inside the mod.
Adding entries for the missing modifiers such as:
mystic_opinion = {
show_as_percent = no
is_good = yes
is_monthly = no
is_hidden = no
max_decimals = 0
}
And of course you need to create the localization for it aswell.
Also the arabic_opinion = 5 is not working for the same reason.

ajacksonian Oct 9, 2019 @ 3:58pm
Doing a variant start at the duchy level as a Levantine muslim that secretly converts to Hellenic after marriage. The idea is to get the cult going while still patronizing the Hellenic sites to keep them going. The idea is to get some underground support while putting a Hellenic in as court tutor. Difficult path no matter how you cut it and a generation in it was fun to be a Hellenic that kept out of factional conflicts and defended the Arabian Empire and actually got another duchy for that work! Stabbing them in the back when Arabians got stuck in 3 wars at once was perhaps unkind, but they were willing to write me off as their ruler was a lunatic. Its a game of opportunism wedged between two empires...

cybrxkhan  [author] Aug 29, 2019 @ 6:32pm
@Lancelot007 Hmm... I think I did originally consider that for the mod overall, but decided against it at first since I interpreted Assyrian much more narrowly, and felt Levantine Arabic worked better as a catch all for various Semitic speakers in the region. But if we take the Assyrians in vanilla as representative of Aramaic speakers in general, then I can see it working. I'll have to think it over.

Lancelot007 Aug 26, 2019 @ 8:59pm
I think it's Assyrian culture, it seems logical with the context. I use SWMH with local language localisation, so.

cybrxkhan  [author] Aug 26, 2019 @ 6:10pm
@Lancelot007 I looked up the SWMH code, and there's only one culture in the Aramaic culture, Assyrian - I don't see any other culture. Would it be Assyrian? Like I mentioned with kindjal83 below SWMH separates Harran and Edessa province and I haven't really figured out how to handle it since it'll be more complicated in the code.

Lancelot007 Aug 25, 2019 @ 6:44pm
Hello ! Great job again ! Like for the Peloponnese, I've found a mistake due to compatibility. On the SWMH, it's more historical that the counties and pagan characters aren't Levantine Arabic but something Aramaean (I forgot the name of specific aramaean culture). Thanks for your work !

fastrike Aug 11, 2019 @ 9:42pm
Yo, in case anyone is curious those hellenic coa are actually from ancient religions reborn.

Kindjal83 Jul 21, 2019 @ 1:05pm
Indeed! It is the province of Al-Ruha. Glad to be of service. I also enjoy a lot your other mods! Playing as Almafi is a blast now, and the Pelopponesus province is more enjoyable!

cybrxkhan  [author] Jul 21, 2019 @ 12:45pm
@kindjal83 I think I know what's the issue then - SWMH has a separate province for Harran (whereas in vanilla Harran and Edessa are the same province), which I haven't figured out a way to handle since it'd be more complicated to account for compared to my Immersion Packs. Thanks for bringing that up, I'll need to add it to the description.