Store Page
XCOM 2>  Workshop > PZ's Workshop
This item has been removed from the community because it violates Steam Community & Content Guidelines. It is only visible to you. If you believe your item has been removed by mistake, please contact Steam Support.
This item is incompatible with XCOM 2. Please see the instructions page for reasons why this item might not work within XCOM 2.
Current visibility: Hidden
This item will only be visible to you, admins, and anyone marked as a creator.
Current visibility: Friends-only
This item will only be visible in searches to you, your friends, and admins. 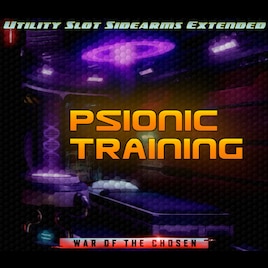 XCOM 2: War of the Chosen - Tactical Legacy Pack
Required items
This item requires all of the following other items
(WOTC) Utility Slot Sidearms Extended
Created by

PZ
Offline
See all 110 collections (some may be hidden)
You need DLC to use this item.

This item has been added to your Subscriptions. Some games will require you to relaunch them before the item will be downloaded.
Description
This mod allows soldiers to train in the Psi Lab to get some bonus psionic abilities, which they can use with the utility slot psi amps added by Utility Slot Sidearms Extended. (If you're also using Psionic Melee, you can equip utility slot shard gauntlets as well!)

Not every soldier will be available to train. Only those who are randomly determined to have a psi gift will be eligible. However, soldiers who aren't gifted will simply not be on the list; I didn't like spending days training and coming up empty, so this mod doesn't work like that. You can edit the percent of soldiers who are psi gifted in the ini file. The default is 20%, but soldiers with a high combat intelligence get a bonus.

This mod works best with a new campaign, but that isn't required. However, if your Psi Lab has already been built, you'll have to get rid of it and replace it with the givefacility console command (or just rebuild it) in order for this mod to work.

You won't see a Psi stat because the game is hardcoded to only show it for Psi Operatives. You can use my UI mod to fix that.

Special thanks to RealityMachina, whose Partially Gifted mod was the main inspiration for this one.

WOTC only.
Popular Discussions View All (2)

Fuedrakia Oct 11 @ 12:51am
I'm guessing that this is meant as a lightweight alternative to XCOM Psionics Overhaul V3, as when I try running these two together they seem to cause CTD's.

CAPTAIN_COMMUNISM May 18 @ 8:42am
A fix for the bug where the same abilities are added over and over again, that worked for me, was to paste this [docs.google.com] into the XComGameState_HeadquartersProjectPsiTraining_USSP.uc, as well as replacing the if statement in line 97 of UIChoosePsiAbility_USSP.uc with:

if (!Unit.HasSoldierAbility(AbilityName))
{
bAddAbility = false;
break;
}
and then recompile the mod. This prevents the game from overriding the selected abilities on project startup, as well as removing some redundand code.

Also, please note that I have basically no experience in modding xcom and therfore also don't really know what I'm doing so back up your game files before trying this.

eigentumer956 Mar 16 @ 10:51am
Where the probability is adjusted. Please tell me the exact procedure.

Shade11 Mar 23, 2020 @ 7:24am
It seems this mod doesnt work. I changed chances for gifted soldiers to 100%, enabled it from the begining of campaign, and i cant train the exsisting soldiers (that have a class already).

Nazkai Jan 28, 2020 @ 7:17pm
@LightenedDark let me know if that fix in your link fixes the same ability coming up over and over again once you've tested if you would be so kind?

LightenedDark Jan 27, 2020 @ 12:31pm
Just like Ydah, Morpheus, Spinel and NDL, I also have soldiers gaining the same ability over and over again. I would select one ability but it would again give that same ability as an option. I looked at the code and it appears to have methods to avoid decided to duplicates "Unit.HasSoldierAbility(AbilityName)" .

I even having a single list "PsiAbilities = (AbilityList = (...))" does not help. Once a soldier bugs, they stay bugged. Some take longer to bug out than others (ie successfully get several abilities). I will try https://steamcommunity.com/sharedfiles/filedetails/?id=933334693 to see if it will help, since I am using LW2 perk packs.

Dr.NDL Jan 5, 2020 @ 9:55am
i had an issue where i would train my normal (custom) classes but it would repeat the same ability over and over. i didn't know at the tine but when i looked at these soldiers they would have insanity 6 times or what ever else abuility 4 to 5 to 6 times.
< >