Store Page
Conan Exiles >  Workshop > snowhunter's Workshop
This item has been removed from the community because it violates Steam Community & Content Guidelines. It is only visible to you. If you believe your item has been removed by mistake, please contact Steam Support.
This item is incompatible with Conan Exiles. Please see the instructions page for reasons why this item might not work within Conan Exiles.
Current visibility: Hidden
This item will only be visible to you, admins, and anyone marked as a creator.
Current visibility: Friends-only
This item will only be visible in searches to you, your friends, and admins. 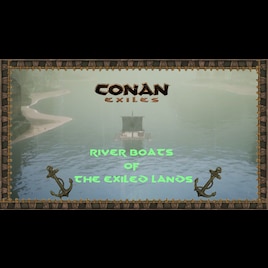 Numinous
Offline
See all 1128 collections (some may be hidden)

This item has been added to your Subscriptions. Some games will require you to relaunch them before the item will be downloaded.
Description
DONATIONS, SUPPORT, DISCORD
Its quite a large project and is no where near authors completed vision. River boats of the exiled lands, will receive continuous improvement as time goes on. Please leave constructive feed back. Negative feedback will go un-answered.

Please Donate to My Paeteron for Continued Custom Content and Updates to this mod
As it require more of my time to keep mods updated.

Please Follow Me on the Following Platforms, Donations to

DISCORD https://discord.gg/PYc8yvj
FAQ:
We released this mod early as we wanted to get feed back and or potential problems brought to our attention.
Use of this mod is at your own risk knowing the potential for adverse server performance on lower end server hardware.

1. Boats support players traveling to and from locations in the Exiled Lands on a preplanned route.
2. No you cannot build on boats.
3. Boats will travel thru building pieces when blocked. Players will be knocked off boats.
4. Boats will not carry following Thralls/pets stable. Thralls and pets will summon constantly, will knock players off.
5. Knocked out Thralls can be dragged onto boats and transported. They will hang off small boats.
6. Players can jump on or off boats while in motion. However Stamina is required to climb into boats.
7. Boats support emotes when commanded while riding.
8. Boats are non destructible.
9. Boats stop on a timer at each docking point. Timer starts/stop on Arrival/departure. Times will very in the future
10. Dropping items on boats during movement will roll off the boats.
11. Boat Routes may change in the future.
12. Camel Transport boat is immersion only.
13. Boat Routes cannot be admin changed or player changed. These are currently permanent to the mod and map.
14. Yes more detail to the cities and river boats mod coming. It?s a time consuming process.
15. Sorcery was used to make boats travel on water. No Baby kappas were harmed in the making of boat mod.
16. Uses mod Control Panel

PINNED: About the Modder
snowhunter
< >
988 Comments

Dragonbait Dec 6 @ 5:25pm
Snowhunter, np i appreciate the response all the same! Your mod actually does work with it, was just hoping to get rid of two map location glitches. Either way thanks for your efforts.

d.s.lokutus Dec 6 @ 12:35pm
mod-mismatch when starting the game. my friends have not any problems, but my start fail after the new update. its a super mod , very nice, thanks, but have you an ides of these problem?

snowhunter  [author] Dec 6 @ 10:57am
sadly everyone keeps forgetting AOC is a total conversion mod. So they are not taking other modders into consideration. Eventually no mod will work with it.


Dragonbait Nov 6 @ 2:27pm
Was wondering if there is an AOC friendly version? I keep getting terrain issues when loading these two mods together.

Dragonbait Nov 6 @ 11:27am
Was wondering if there is an AOC friendly version? I keep getting terrain issues when loading these two mods together.

Demiwalker Oct 29 @ 8:51am
Hi snowhunter, is it possible to add an enable/disable eel/shark option in the menu? with our server settings we get insta-killed while traveling on the boat. Thanks for your work!

Lilly Oct 24 @ 6:01am
Just wanted to say how much I love this mod. It has transformed my single player game by making the world come alive. It's got to the stage now where I look for a sever using this mod if I want to play multiplayer - thats how important it is to me. Keep up the fantastic work and thanks again.

Theobald Sep 28 @ 2:11pm
It seems the MiGo event at Scavenger's Berth can misfire with the changes of this mod, can anyone confirm ? (no spawns and endless "open skies")