Store Page
RimWorld >  Workshop > uniinu's Workshop
This item has been removed from the community because it violates Steam Community & Content Guidelines. It is only visible to you. If you believe your item has been removed by mistake, please contact Steam Support.
This item is incompatible with RimWorld. Please see the instructions page for reasons why this item might not work within RimWorld.
Current visibility: Hidden
This item will only be visible to you, admins, and anyone marked as a creator.
Current visibility: Friends-only
This item will only be visible in searches to you, your friends, and admins. 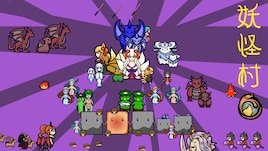 This item has been added to your Subscriptions. Some games will require you to relaunch them before the item will be downloaded.
In 1 collection by uniinu
自作MOD一覧（My original MOD list）

6 items
Description
This has been translated by the DeepL translation tool
.
2021/11/20

The elements included in this mod are as follows
Addition of two forces.

A new research tree will be added, containing over 20 studies.

A new scenario for people to enjoy the elements of the Specter Village.

Adds over 10 types of specters, 4 types of dragons, and 3 hostile dragons.
Typical vanilla traders don't bring many specters or dragons with them.

Added support for RimWorld 1.3
.
Adjusted and added abilities of specters.
Lamia will now help with milking.
Some of the yokai's intelligence has been modified. Basically, they are now smarter.
Two (technically three) new yokai have been added.
Two (technically three) new yokai have been added. The carnivorous ones often get dirty.
Some monsters' stats have been adjusted.
Some monsters have been restricted in how they can join and how many they can join.
The amount of food consumed by Hodama has been drastically reduced. The lifespan has been increased by a factor of 100!
Yukidizuku does not occur naturally. Yukidrop does not occur naturally, but joins through events. The hint is snow.
The nine-tailed fox does not occur naturally. It becomes a friend when you meet some conditions. Hint: They are good friends.

There are now many more items!
In addition, many of the existing items have had their performance adjusted to match the new items. For more information, please play and see for yourself!

Five more dragon curses have been added.
The new ones are also strong. Bones, guts, etc.
The existing curses have also been tweaked. It's mainly related to beauty.

The Oni have come out as replacements.
They're the new leaders. They look just like humans, but they're stronger.

We've changed the specifications of the monsters' weapons.
We've reviewed the entire system, and the impact of the weapon's original performance has been increased. When transferred from existing data, the new formula will be automatically recalculated.
It is now possible to grow vanilla and other modded weapons in the same way as spectral weapons.
There are now two types of weapons: natural and artificial.
There is now a section in the item information called "00 Monster Weapons" where you can find information about the unique stats of monster weapons.

There is no way to go back.
The recipe has been removed. We are currently preparing to create an event to obtain them.
If you really want to use them, please take them out in developer mode or start with a dedicated scenario!

Some equipment is now compatible with royalty.
You don't need to own or use the DLC to use them.

We've finally implemented a unique alchemy system for Specter Village!
This is a system that gradually unlocks useful functions by collecting youkai. You'll be able to use this system in a variety of different ways, and the trick is to collect and befriend a variety of monsters.
In the past, you had to register a recipe for making various alchemy materials in the Youkai forge, but that has been removed and you can now do it in the Youkai alchemy pot.
Some items can no longer be made by simply completing research, but must be unlocked from both the research and smithing systems. The most powerful weapon in the Monster Village is one such item.
Some new elements, such as the aforementioned artificial specter weapons, cannot be used from the start, but must be unlocked through the alchemy system.

Some new elements, such as the aforementioned artificial monster weapons, will not be available from the start, but will need to be unlocked through this alchemy system.
The main focus is on flavor text to convey the world of Yokai Village, but there are also hints of unique elements of Yokai Village that are not too meta.
I hope you'll enjoy it when you don't know what to do, or when you're just taking a break from playing.
I'm sure you'll be able to figure it out.
I'm not sure what to do, but I'm sure you can figure it out. I'm sorry.

1.1 has not been updated.
There is no plan to update it in the future.


・・・・
Acknowledgements
.Shinobu-chan, who is responsible for many of the illustrations. Thanks again!
Big thanks also to Ao and Nanamo Kisaki for some very nice illustrations!

Also, thanks to Ryouta for writing the behavioral controls and to the author of the House cat Keeper mod. Thank you very much.
Thanks also to Fujisawa-san for supervising and consulting me on various DLLs. I appreciate your accurate and sharp advice!

A sincere thanks also to Shion for providing the simplified Chinese translation. It was given to me as a Christmas present.

License
.You are free to redistribute and modify this mod as long as you follow the license below.
- CC BY-NC-SA 4.0
Copyright 2017-2020 Uniinu,Shinobu,Fujisawa,Ryouta,and more.