Store Page
Hearts of Iron IV>  Workshop > Endsieg Official Page's Workshop
This item has been removed from the community because it violates Steam Community & Content Guidelines. It is only visible to you. If you believe your item has been removed by mistake, please contact Steam Support.
This item is incompatible with Hearts of Iron IV. Please see the instructions page for reasons why this item might not work within Hearts of Iron IV.
Current visibility: Hidden
This item will only be visible to you, admins, and anyone marked as a creator.
Current visibility: Friends-only
This item will only be visible in searches to you, your friends, and admins. 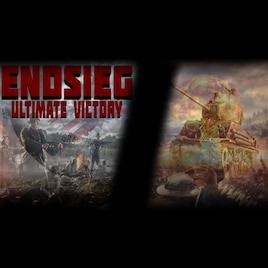 This item has been added to your Subscriptions. Some games will require you to relaunch them before the item will be downloaded.
Description
Are you interested in a more accurate, more fun and europe-only Endsieg-like mod? Join the Primo Victoria Discord[discord.gg]!
This is the official successor to the Götterdämmerung 1944 Mod. Anyone else claiming to be or uploading a former/older version of this mod (Götterdämmerung 1944) is doing so without Endsieg's consent. If you have any questions, suggestions or want to become a dev we redirect you to our Discord[discord.gg].
If you would be so kind, this is my (MisterJay) Patreon[www.patreon.com]. I currently do not have a steady source of income, and might have to give up modding if I can't find it through Patreon. Your support would be highly appreciated.

Endsieg is German for "Ultimate Victory", this term was commonly used in WWI and WWII propaganda and was one of the most widely used terms in propaganda by the Third Reich. Joseph Goebbels would still come to use this term as late as 1945 ensuring German's that they were facing a "final victory".

July 2nd, 1941: Operation Barbarossa
With the start of Operation Barbarossa on the 22nd of June 1941, Germany has officialy broken the Molotov-Ribbentrop Pact. The first phase was the first and only attack along the entire frontline, and captured a huge stroke of USSR territories. The German army seems unstoppable and the Luftwaffe reportedly destroyed 4,000 Soviet Aircraft while only losing 80 of their own. Libya is still holding strong and so far the Soviets seem unable to resist the German Panzers. Japan stands poised to attack the allies in the Pacific...

August 1st, 1942: The Battle of Stalingrad
After a harsh winter in the first war of the eastern campaign the German Army continued their offensive but with a different objective. The oil fields in the Caucasus. On its way is the strategically important city Stalingrad. For Stalin, the city has an important role. The Soviets will not give up the city easily. That's clear.

July 11th, 1943: The Turning Tide
The Battle of Kursk starting July 5th, 1943, would become one of the largest tank battles in history and would ultimately force Germany after its evetual defeat to stay on the defensive on the Eastern Front for the rest of the war. Called "Operation Citadel" its purpose was to cut off the Kursk Salient/Bulge to prevent further Soviet Offensives by (hopefully) encircling large amounts of Soviet forces in the salient/bulge. In Italy the allies have recently landed in Sicily and are attempting to push into mainland Italy, the Italian government is ever so barely lingering on the side of the Axis with an inner struggle going on. In the Pacific, the Japanese Empire has reached its zenith and is now starting to fall back.

June 21, 1944: Götterdämmerung
The Allies have just landed in Normandy two weeks prior and on the east the Soviet Steamroller is pushing full speed ahead sparing none mercy crushing anything and anyone in its way, Germany is not on its knees yet holding a great deal of territory and resources but its time is short. Its allies are giving up hope, their people weary of continuing the war, Italy has switched sides and now all that remains is the northern half puppet state, the Italian Social Republic headed by Il Duce, Mussolini. In the Pacific, the United States is slowly approaching Mainland Japan as the war situation free falls for Japan.

December 16, 1944: Kampf für das Vaterland
The German Reich is being pushed back heavily from all directions, the Allies in the West took back all of France, and Belgium, and are now dangerously close to breaking through and infiltrating the heart of the Reich itself, in the east the Russians are still quite a way behind the Oder River but the front has extended greatly and our ally Romania has surrendered with Hungary dangerously close. Italy is at a standstill and in Asia, the situation for Japan is not getting any better with the United States invading the Philippines and the Japanese Navy being a shell of its former past.

March 20, 1945: Endsieg
Aided by air blows which paralyzed communications throughout the length and breadth of Germany, the Allied Armies have surged across the Cologne Plain. To the south, other forces drove eastward through the rugged Eifel along the Moselle River. Dashing to seize a usable bridge overlooked by the enemy, United States troops crossed the broad river at Remagen. In the Saar, a coordinated offensive was launched to destroy the remaining German forces west of the Rhine. The Russian Bear is pushing without anyone being able to stop them.n\n The war is coming to a close but Germany is far from surrendering with Goebbels reportedly saying that "Endsieg is near" on the radio".

Endsieg features a variety of things besides the scenarios to give more depth and more accuracy to the game.

Reworked AI:
AI has been reworked to the greatest extent, we do not promise amazing AI, we just tried to fix it up as much as we could, the rest is up to the developers.

Historical Accuracy:
Endsieg adds two new types of equipment, Rations and Fuel. Rations are needed for soldiers in addition to weapons to keep them at full strength and for this you need the grain resource, whilst Armored Vehicles require the Fuel resource which is made with1 Oil, this is more realistic essentially and will more clearly represent the German struggle with Fuel at times.

A New Tech Tree
Made Primarily for the 1918 scenario we also added some more things in general to the Tech Tree to add more flavour to the game and we will be continuously producing and adding more content to the tech tree with time, feel free to give suggestions if you would like to see something added!

Because Endsieg adds more provinces, a new tech tree, amongst many other things it will most likely not be compatible with many mods that rework such areas. Mods that are compatible without a doubt however will be that of gfx.

We are currently working on majorly expanding WW1 and interwar. Do note that the current developers all go to University and do not have a lot of time on their hands. I would also like to expand on the scenarios, I know people have asked for a 1945 March scenario or something like that with the battle of Berlin, others have asked for 1942 Scenario. I will be adding scenarios with time.

Future Scenarios:
These scenarios are planned for the future, in decreasing order of importance:

Tech Tree:
We plan to expand the tech tree slowly to include a variety of news technologies to add more depth to the game. Currently the tech tree (thanks to the fellows @RT56) expands until 1956 for most technologies, so this should allow for a long period of gameplay.

Minors Depth:
We eventually want to expand on minor nations such as Bulgaria, Hungary, Finland, Yugoslavia, etc and make them more unique nations with events of their own and ministers.
Popular Discussions View All (90)

majamanic4 Oct 24 @ 1:57pm
Anyone else have this problem?
When i look at endsieg in my play set it says that my game version is behind for the mod and that the mod is on game version 1.20.5 and when i launch my game with endsieg its just vanilla

josegracia92 Oct 24 @ 12:01am
if you play as japan in the 1941 scenario you ar at war with the netherlands then also with the allies. that is not very accurate historically because japan didnt declare war to the allies till the invasion of malaya in dec 1941

Potato Oct 18 @ 7:15am
I don't think this counts as a bug but in the 1942 start, Finland's position is too weak and they are immediately overrun by the Red Army. Also, they start at scraping the barrel but with only 2.5% of the population conscripted.

damir.gorbik Oct 17 @ 4:50am
@(SSC) shadow night you get the endsieg research tree and a focus tree from r56

Face of Insanity Oct 16 @ 4:26am
Getting issue where the mod is not loading, culled install and all files and other modes, etc, etc