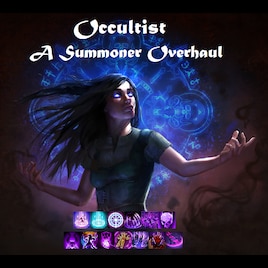 J0k3_R
Offline
See all 2903 collections (some may be hidden)

This item has been added to your Subscriptions. Some games will require you to relaunch them before the item will be downloaded.
Description
What is this?
Are you bored of Vanilla summoner? Don't get me wrong, summoner is pretty strong (especially near the start of the game) but once you play more, it's really just doing the same thing, and it isn't terribly interactive at times. Which brings me to this mod. When making this, I had the following things in mind:
Hopefully I've managed to do that, but I'll let you be the judge of that! And if I haven't, let me know!. Now, onto the specifics:

What has been changed from the base game?
Not much, really, I think summoner is actually pretty balanced overall, it just feels a bit boring at times. That said I did make a few changes

Here is a full list of added spells and their requirements: Occultist Skill Sheet[docs.google.com]

A new status has been introduced: Corrupted. Corrupted reduces an enemies STR, FIN, INT, CON and WITS with each stack (Max 3). When you kill or cast manifest on a corrupted enemy, an Eldritch Parasite is summoned to help you for 3 turns. The higher the stacks of haunted, the stronger the parasite summoned. Parasites deal physical damage.

Where do I get these skills?
These skills can all be bought from Elendra, Occult Master who you will find throughout your travels. She can be found in:

Feedback
Let me know what you think of this mod in the comments. Any suggestions on balance are welcome. Check the Changelog to keep track of any changes I've recently made

Check out the Addon for this mod too! It makes the summons Permanent:
Permanent summons Addon
< >
176 Comments

Bob Sep 16, 2021 @ 12:39pm
It's probably pretty known by now due to how many people have mentioned it but Manifest Horror really does seem to like to crash in most places if you get the 10% summon.

IBrownie Sep 13, 2021 @ 11:59am
Does anyone else have the issue of sometimes their tentacles from the one source point summon just pass their turn and dont do anything?

Teräs Makkara~ May 11, 2021 @ 9:21am
An update to this would definitely be pog, always loved playing summoner and having some eldritch horror magic mixed in would be definitely right up my alley.

Tarso Feb 17, 2021 @ 3:18am
I noticed Imps are super weak on Divinity Unleashed. Not this mod fault of course since DU is a big overhaul, but just to let other people know. If you want to tuse this mod with DU, stay away from imps.

Iceberg Dec 29, 2020 @ 1:55pm
I noticed you updated the hybrid spells mod. What a great mod. Looking forward to this one getting updated as well.

Siatru Dec 3, 2020 @ 2:23am
I don't see the beholder queen on my testing run. Might've missed it or maybe I need something else. Also never experienced a crash with Manifest Horror... yet.
< >