Store Page
Arma 3>  Workshop > Still Trans Rights's Workshop
This item has been removed from the community because it violates Steam Community & Content Guidelines. It is only visible to you. If you believe your item has been removed by mistake, please contact Steam Support.
This item is incompatible with Arma 3. Please see the instructions page for reasons why this item might not work within Arma 3.
Current visibility: Hidden
This item will only be visible to you, admins, and anyone marked as a creator.
Current visibility: Friends-only
This item will only be visible in searches to you, your friends, and admins. 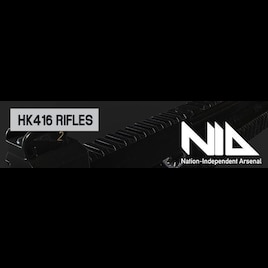 Navaro
Online
See all 1078 collections (some may be hidden)

This item has been added to your Subscriptions. Some games will require you to relaunch them before the item will be downloaded.
Description
This weapon set was made possible by the generosity of the people who're backing this through Patreon.
If you'd like to see more of this stuff ,why not pitch in a couple of bucks? Through Patreon [www.patreon.com] If you can't or don't want to, no hard feelings.


About-
============
The development of the HK416 platform is a strange anomaly in the world of 2018. If judged by it's design intent - an AR15 with some of the issues H&K found with the system removed-
the HK416 is by and large stands on it's own merits. However, in the context of the flood of AR-15 pattern projects since (both Civil and Military spec), the end product 15 years on seems out of date.

How did it come to this?
The Genesis of the platform was a confluence of sorts: In the early-to-mid 90s Heckler und Koch was in the midst of multiple US-DOD weapons development programs (most notably the XM29 OICW), which was the same time that then R&D officer for Delta Force Larry Vickers was consulting and evaluating. During the consultations, Vickers made a formal request of H&K on behalf of Delta for improved carbines.The reasoning for these was straightforward: Delta and other SF units were using non-standard CAR-15s in a variety of designations, often in barrel/gas system lengths that made them wholly unreliable and ultimately impractical.

The general fix of what was now the H&K M4 was to adopt the G36 Short-stroke gas system, it itself an adaptation of the AR18 system.In 2004 the project was complete, and after a legal scuffle with Colt over the name, Delta Force took acceptance of their requested carbine: a more reliable and durable 5.56mm CQB weapon with better suppressed capability. The cost of that extra durability and performance however, came at a weight premium,and it's one of the criticisms made of the system to this day. Still, with the Commercial launch, the system saw solid interest.

By 2008 it was clear to H&K that with the dead-ends of the XM8 and XM29 programs, combined with the limited interest globablly in the G36, the rising interest in the 416 made apparrent what the market wanted. No place was this more apparent than when the Nowegian Military selected the rifles, in a 16.5 inch barrel configuration, as their standard rifle- replacing 40 year old G3s.The REAL windfall though came later in the year with the US Navy SEAL raid in Pakistan, where the tell-all propaganda tour afterwards made ample highlight to "the guns that got it done", replete with personal customisations like Magpul CTR stocks, Overmold Grips, RAHG lightweight fore-ends, and an impressive LLM stack.
The last major adopter of the what could probably be now considered first pattern HK416 system, was the USMC- As a companion and/or replacement for the M249 SAW in an infantry Squad. The idea has merit, and while some of the accessories the Corp decided to adopt as part of the system were questionable in their selection, the rifle itself was a good fit. Heavy barrel with a long service life, little to change in the way of battery of arms or maintenance, can deliver better Automatic performance than an M4, but retains better mechanical accuracy over longer strings.
As a whole, as far as service rifles go, this is one of a few viable open-market options left. For military purposes, it's more than good enough, and that at the end of the day is what clenches the deal.

As a note: the RAHG and SMR foregripped weapons do not currently support VFG/AFGs. The support will be enabled as part of a future Core update. Apologies for the inconvenience.

☠︎Skyyz Jun 23 @ 2:55am
is there a dedicated ace compat for the hk416 or does that adopt its compat from the core ace compat mod?

Neptune2284 Aug 19, 2019 @ 7:57am
Has anyone found a fix for not being able to use foregrips on any of these rifles, even the quadrail versions? I can only attach bipods, not any grips. I have the RHS and CUP compatibility patches loaded but no joy on that front.
< >