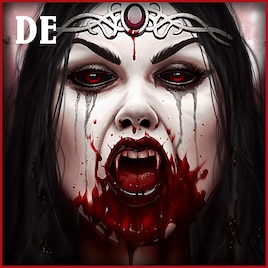 12 items
Description
If you're seeing skill icons as question marks, please make sure you've downloaded and enabled my Shared Library mod - it is required!
Per popular request, a new Vampire class mod!

Vampirism skills are tied to both Necromancy and Warrior tracks, and include a wide variety of buffs, debuffs and damage abilities, as well as (of course) health-stealing. It is also has great mobility, with several skills that can assist you in getting around the battlefield quickly and safely. Skills scale on Strength. This mod is also very Undead-friendly - I've been play-testing as Fane.

This mod also features new 'unlockable' skill tiers at levels 2, 6, 10, 14 and 18. When you reach each of those levels, a lock icon will appear above your character's head, and a decaying heart will appear in your inventory. Consuming the heart will prompt an internal dialog where you can decide which of the available options you'd like to choose. This unlockable behavior will be available to any player that has memorized the Bite skill (level 1 / starter skill).

I've also included a healing coffin in your starting inventory, which takes the place of a normal bedroll.

Skills:
Level 1:
* Slash - (Starter) Attack your enemy with physical damage and make them bleed. If another enemy is close enough to your target, they may be struck as well.
* Bite - (Starter) Sink your fangs into the neck of your enemy, causing piercing damage, and granting yourself some of their health. Progressively sets Bitten, Maimed and Ravaged statuses on subsequent hits if the previous status is still active.
* Stalk - (Starter) Jump to your enemy and make yourself invisible for one turn.
* Throw Daggers - Toss two of the daggers that you stash under your cloak.
* Hunt - Activate your heightened vampiric senses, increasing initiative, sight, hearing, accuracy, wits and chance to hit for three turns; while sniffing out invisible enemies. Protects from blinding.

Level 4:
* Bloodrush - Rush forward, hitting all enemies in your way with physical damage and causing bleeding. Leaves a trail of blood.
* Hemoglobe - Project an orb of blood at your enemy which can bounce to additional targets, leaving blood at their feet.
* Pounce - Push off the ground with your superhuman strength and attack an enemy with piercing damage.
* Bloodthirsty Blade - Enchant your target's blade with extra hunger for blood; causing extra damage, life stealing and chance of bleeding.

Level 6 Unlocks: Psychic Influence
Psychokinesis - Pick up a character or object and drop it somewhere else, doing damage and leaving a blood surface.
OR Levitate - As a vampire, you can raise yourself off the ground for short periods of time, making you immune to surfaces.
OR Always Invited - Unlock any locked door or container using the powers of your mind.

Level 8:
* Bat Swarm - Reduce visibility by summoning a swarm of bats, occluding enemies' sight and causing them damage.
* Regurgitate - Vomit up cursed blood in a cone, thereby removing several negative statuses from yourself. Does damage to characters in its path.
* Impale - Ram a wooden stake into your enemy. Set a status that deals them piercing damage when they try to walk.
* Soul Armor - Increases Magic Armour and steals more from each enemy around you.

Level 10 Unlocks: Intimidation
Haunted - Chill surrounding enemies, knowing you are a supernatural predator on the prowl.
OR Hunger - Embrace your dark nature and let your vampiric hunger show, possibly terrifying your enemies.
OR Hysteria - Target character is driven mad with fear, attacking whatever characters are closest to them.

Level 12:
* Four Course Meal - Using your vampire superspeed, zip through four enemies for a satisfying dinner.
* Enthrall - Mesmerize enemies in a cone, disarming and muting them but turning their allegiance for two turns.
* Cannibalism - Devour a corpse for sustenance.
* Blood Sigil - Sear a blood sigil into the ground that cripples and bleeds enemies, while hasting allies.

Level 14 Unlocks: Blood Magic
Bloodbath - Channel Countess Elizabeth Báthory who bathed in the blood of virgins to keep herself young. Removes diseased, decaying and burning from you and nearby allies.
OR Hot Blooded - Set your nearby enemies' blood boiling, and deal damage to each. They will explode after three turns or upon their death.
OR Bloody Redemption - Heal and gain damage incrementally for every nearby bleeding character.

Level 16:
* Bloody Barricade - Raise a wall of corpses to block your enemies.
* Exsanguinate - Drain your target of blood, dealing immense damage. Knock them out for one turn and make them weak for three.
* Turn - Turn an ally so that they can temporarily enjoy the benefits of vampirism. Grants death resistance. If they kill while turned, they'll prolong the status.
* Summon Vampire Bat - Summon a vampire bat voidwoken to do your bidding.

Level 18 Unlocks: Immunity
Blood Mist - Disappear into a blood cloud, giving yourself Freeze, Stun and Knockdown immunity for four turns.
OR Undeath - As an undead creature, make yourself invulnerable for two turns. Prevents all statuses, both positive and negative.
OR Mental Fortress - Harden your mind against Charm, Taunt and Fear attempts for four turns.

Starter Class
If you select the Vampire class at Character Creation, you'll start with the game assuming dual-wielded swords (however skills should scale with whatever weapon type you equip). The starting skills are listed above. The class comes with preset Leech talent, 1 point each in Luck and Persuasion, and 1 point each in Wits, Intelligence and Strength, but those are all changeable. The default skillset is Necromancy, Warrior and Rogue - you can change if you want, but removing Warrior will disable the starter skills.

Trader
A trader named Desdemona is available in several areas to purchase Vampire skillbooks. She has black hair, pale skin, and wears black and red.
* In Fort Joy, behind the Necromancy skill vendor's tent.
* On the Lady Vengeance, next to the stairs as you go below-decks.
* In Driftwood, on your way into the Under-tavern.
* In Arx, underneath the overhang by the toyseller's shop (near a vendor cart with a crossbow).

Install my Shared Cheat Chest mod if you'd like copies of all relevant skillbooks for free when arriving at Fort Joy: https://steamcommunity.com/sharedfiles/filedetails/?id=2064499288

Huge thanks to LaughingLeader for scripting assistance and inspiration (and patience!). Several of the ideas in this class came from his original brainstorming and I couldn't have done this one without him!

Why I have 4 companions on start?
РыжаяПсина

my dude Oct 30, 2021 @ 4:59pm
Great mod but getting the heart is extremely buggy if you don't start the game as a vampire. I think the heart should be added as a buy-able item to easily resolve this.

Ren Tsune Oct 18, 2021 @ 7:38am
Personally, love this class. I think it might actually be my favorite. There are only a couple things I would personally tweak. I think I'd make Hunt a stance, have it be incompatible with Blood Presence from the Death Knight class mod. I wonder how hard it'd be to make that tweak...I might also add in some other classic vampire abilities, shape shift abilities for mist and a bat, wolves and werewolves are available in other mods...I can see that there is a blood mist skill that is pretty close. I'd only tweak it to be a toggle.

@Zemnexx There is a mod that adds a well you can interact with to make yourself undead. Added benefit of not actually being a skeleton and having to deal with Veiled Undead status.

AarkNoa Oct 18, 2021 @ 12:50am
I'm reading a lot of comments about the hearts not spawning at certain levels and for me this has never happened. The condition for you to get one of the Vampiric Hearts is still to have the "Bite" skill enabled, right?

Invader Zim Oct 1, 2021 @ 3:54am
Started class on creation. Heart mechanic didnt worked for my lizard guy but worked on human normally before.

Bayou Karen Sep 28, 2021 @ 9:23am
Don't use it if you're not planning on starting as one. Heart mechanic is gone forever once you start the game without choosing this class on creation.

Tert75 Aug 12, 2021 @ 9:09pm
Good Class, but i have noticed an issue regarding the vampire hearts. If you play with the Joyless Beginning mod it starts you out on the Lady Vengeance at level 9 and it doesn't give you the two hearts you would get from the first two level brackets. I could have missed it but i looked all over for them.