Store Page
Wallpaper Engine>  Workshop > butcho's Workshop
This item has been removed from the community because it violates Steam Community & Content Guidelines. It is only visible to you. If you believe your item has been removed by mistake, please contact Steam Support.
This item is incompatible with Wallpaper Engine. Please see the instructions page for reasons why this item might not work within Wallpaper Engine.
Current visibility: Hidden
This item will only be visible to you, admins, and anyone marked as a creator.
Current visibility: Friends-only
This item will only be visible in searches to you, your friends, and admins. 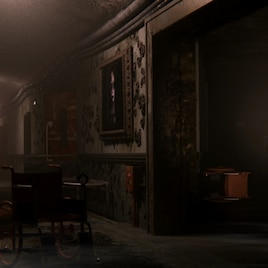 butcho
Offline
See all 4 collections (some may be hidden)

This item has been added to your Subscriptions. Some games will require you to relaunch them before the item will be downloaded.
Description
"In this facility horrible experiments were conducted on the helpless, mentally sick inmates for decades. All under the false pretence to "cure" their disease but served just the one cause to satisfy the sadistic needs of the doctors and staff members.
Until one night when it suddenly all went silent. After hours of terrible noises all the patients and everyone else were vanished, no one was ever to be seen again and no living soul set a foot in this cursed asylum ever since. Though there is rumor among townsfolk talking about moving lights behind the broken windows and agonizing screams echoing through calm nights."

after two wallpapers using mostly internal WE fx i decided it´s about time to do something else again. All the stuff in this wallpaper rendered for nearly three weeks with all the CPU / GPUs i have access to but i like the result. So if you dare enter the asylum. ;-)

Hope you like this wallpapers. Have fun with it.

Update 1: Whoops, forgot to list the sources. Here´s the model i used for this wallpaper: https://www.blendswap.com/blends/view/87737
< >
10 Comments

sin of concupiscence>Arthemis Sep 8, 2018 @ 12:01am
im so scared~MISS GHOST i will coming to find you ~but i hope you`r girl,cause im so boring :(lets make some funning?