Store Page
ARK: Survival Evolved>  Workshop > WrierGold's Workshop
This item has been removed from the community because it violates Steam Community & Content Guidelines. It is only visible to you. If you believe your item has been removed by mistake, please contact Steam Support.
This item is incompatible with ARK: Survival Evolved. Please see the instructions page for reasons why this item might not work within ARK: Survival Evolved.
Current visibility: Hidden
This item will only be visible to you, admins, and anyone marked as a creator.
Current visibility: Friends-only
This item will only be visible in searches to you, your friends, and admins. 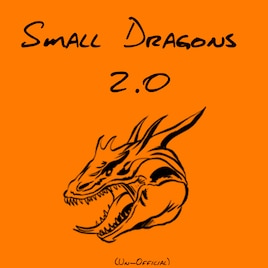 WrierGold
Offline
See all 783 collections (some may be hidden)

Yes, they are back, and they are just like the old ones, but better!

Don't Forget to Rate, and Favorite!!!

Note: This is meant to be balanced for vanilla, if you want to use it for modded, you're gonna have to use stat multipliers on your server.
Our old favourites the Small Dragons are back, and they are just like the original!
Took a while to make, but it's finally out. If you were a fan of Small Dragons before it broke in the workshop, then this mod is for you!
This mod is not official, since i'm not the creator of the original mod.

----More about the mod:
Well, the new Small Dragon has almost the exact same color regions as the old one, almost the same stats and balancing, similar control and movement, diving and strafing, and some other things. I've compared from experience and videos to make it be just like the original Small Dragons. It also has a new range of saddles and armors to wear.

Small Dragons now have a multitude of uses, they can harvest Stone, Thatch and Wood, and have weight reduction for those materials, along with raw Metal. They are excellent for weight and transport, as they can carry creatures just the same as the Quetzal.

They are also capable of having babies, and getting mutations.

It also has the same attacks as the old one, along with a few new ones (Read below). Some of the old annoying things that the old Small Dragon had has also been fixed, such as loud footstep sounds, and the weird looks when using the firebreath while running.

----What attacks does it have?:
-Left Click: Bite attack, damages creatures and structures.

-Right Click: Firebreath, can be used in the air and on the ground.

-C button: On the ground, it does a wing attack similar to the Wyvern. Harvests wood and thatch from trees, and pushes creatures away. In the air, it performes a pick-up which can carry every dino that the Quetzal or Wyvern can carry.

-X button: Claw attack, which can harvest stone while on the ground.

-Ctrl button: Does a roar, it's awesome.

Small Dragons spawn in the mountains, and on Dead Island. That means, on The Island, Scorched Earth, Ragnarok, The Center, Crystal Isles, Shigo Islands, and any other map that has mountains, or a carnivore island-like place. On Extinction they spawn in the desert area, and also in the deep ravine next to the city (The place that has a lot of Kapros and Sarcos)

There's two new saddles, one that is a Passenger saddle with 2 more seats for friends, and a One-seater version for one player. There is also a Chitin armor for it, yes, Dragon armor, not just a helmet this time ;)
Armor and saddles are crafted in the inventory!

Saddles and the armor can be colorized, and have their own custom icons and looks.

They are tamed just like the old ones, you knock them out and feed them meat. Their prefered kibble is Exceptional Kibble. Amount of tranqualizers varies, it should be around the same level as a Rex, but they have more resistance to damage, so i'd say about 50% more tranqs as an equally leveled Rex.

(Psst! Quick tip! Aim for the head, it does 3x the damage/torpor!)

Spawncodes are in the discussions below!

The mod may or may not contain any bugs, but if you do find any, be sure to report back here!

Hope you enjoy, go back and have fun with those firelizards once more! :D


Special thanks to @Grognak for taking these awesome display images!
Popular Discussions View All (16)

Hazyeyez Jul 17 @ 4:31am
Love the mod. Just wondering where can I get the spawn code for summoning a pre-tamed dragon, so I don't always have to go thru the additional forcetame command too?

DRAX GAMING Apr 17 @ 5:42pm
Same colours all the time on Valguero? Harvesting seems to lag up the server?

dragonfang103 Mar 30 @ 9:39pm
actually had a friend back up their server to test it and water doesn't kill the dragon to anyone reading the comments, and they can't swim

dragonfang103 Mar 30 @ 8:14pm
I heard someone say that someone else said that touching the water insta-killed their dragon, can they not touch water/swim?

connorwaldron81 Mar 21 @ 1:40pm
Still not spawning it seems, Genesis may have busted t

TheIrishStud Mar 7 @ 10:40pm
Either one of my 6 other dinosaur mods are conflicting with small dragon spawn points or Genesis broke small dragons. I'm new to modding so I'll be back to comment again if it's another mod.