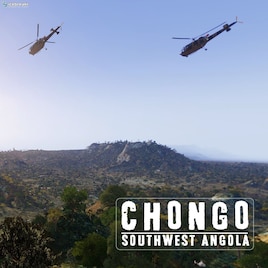 This item has been added to your Subscriptions. Some games will require you to relaunch them before the item will be downloaded.
In 1 collection by IceBreakr
SBP Chongo Party

Maps were made In honor of:
- Recce 1 Commando Lt. Freddie Zeelie that died in combat operation in 1974
- Paul Pelosi aka Bushlurker, dedicated Armaverse Community Member that passed away recently.

1) Southeast Angola 1974:
Island is set to year 1974 when South Africa's 1 Recce Commando Unit operated from FOBs in the North Namibia. The South African "Recces" were deployed to many local hot spots during the late 1970s and early 1980s, particularly Angola. Namibia-Angola border had no fence at that time, only visible cutout grass (line) about 1/4 down from the North tip of the map.

There are two FOBs with airstrips in central S and NW sectors. Back in 1974 most of the land has been without any roads and permanent settlements, so we try to simulate that harsh environment in this map. But I've added some roads for AI to somehow cope with the harsh terrain. Map is dedicated to heroes of the war and used by South African SF soldiers that also enjoy Arma 3. And hopefully rest of you, too ;)

2) Southwest Chongo:
Island is based on real terrain data as previous one but improved for sake of gameplay. There are couple of issues still remaining currently (street lighting missing, couple of placement bugs).

IceBreakr  [author] May 19 @ 7:05pm
Lowlandnutria92 possible conflict with one of the mods? Nobody reported that units cause error witht the map itself?

Lowlandnutria92 May 17 @ 6:16pm
hey Ice my unit keeps getting a config bin error with your map I have a picture of said error aswell

Kruger May 5 @ 1:35pm
Think I've posted it here before but HOT DAMN these two maps are good!
Thank you so much for all the great work over the years IceBreakr!