Store Page
ARK: Survival Evolved >  Workshop > garuga123's Workshop
This item has been removed from the community because it violates Steam Community & Content Guidelines. It is only visible to you. If you believe your item has been removed by mistake, please contact Steam Support.
This item is incompatible with ARK: Survival Evolved. Please see the instructions page for reasons why this item might not work within ARK: Survival Evolved.
Current visibility: Hidden
This item will only be visible to you, admins, and anyone marked as a creator.
Current visibility: Friends-only
This item will only be visible in searches to you, your friends, and admins. 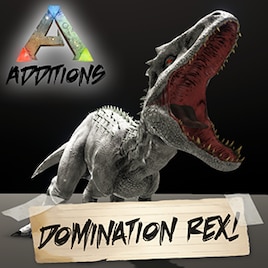 garuga123
Offline
See all 9211 collections (some may be hidden)

This item has been added to your Subscriptions. Some games will require you to relaunch them before the item will be downloaded.
Description
MOD ID 1445395055

Big Thanks to UpFromTheDepths for the Trailer! Check out their Youtube Channel here!

Added the horrific Domination Rex to the ARK!

The Domination Rex is a very unique addition... it doesn't spawn in the wild. To acquire or even see a Dominator, you have to engineer a Domination Rex Egg, which can be learned at level 100. The Egg requires some difficult materials to obtain, so don't expect an easy Domination Rex!
Once you have your baby Dominator, be careful! Baby Dominators, all the way to adulthood have a tendency to get very grumpy, and could potentially attack you or your tames at any moment, so don't raise a dominator in the company of others!. Once fully grown, Dominators are one of the most powerful mounts in the game, with a multitude of abilities, such as a resistance to Giga's bleed, and a buff against boss enemies and alphas!

Left-Click is a Bite attack, which can damage stone
Right-Click is a claw slashing attack, which hits twice and does pierce. As a random added bonus, it can gather wood and thatch with this move.
Holding Right-Click starts a pin attempt. If the Dominator succesfully pins a creature within its grab weight threshhold, it will proceed to outright kill that creature. Successfully performing a pin also grants the Dominator a considerable healing buff!
C Key activates Domination Rex Camo, which acts basically identical to Rock Drake Camo, with all the same benefits!
Left Control is a Dominator Roar. This doesn't do anything, but looks really cool, and can be used while moving!

Domination Rex has several perks in addition to its moveset:

Domination Rex grants a Hypothermal and Hypertheraml Insulation buff to its rider.
Domination Rex is immune to several damage types, such as Giga's gnash/bleed effect, Allo/Deinosuchus gash, and bleeding. All variants are also immune to Radiation damage.
Domination Rex gets a buff when it detects the presence of powerful creatures (bosses, alphas, and raid dinos). When this occurs, the Dominator gets a 15% damage increase, and a small increase to resistance! This makes Dominators' incredibly useful to have in boss fights, or in battling alphas.

There are 5 Domination variants total, one for each map. Each Egg has its own requirements for crafting. The general rule for a Domination Rex Egg is:
3 Specific Artifacts
2 types of Alpha parts
50 Element

Domination Rex now has 3 Costumes exclusive to Genesis Pt.1, that can be equipped to ANY Domination Rex, and can also be colored! These are unlocked at Level 100 and are crafted with 5 Element each.

Domination Rex has a saddle, but it's not required to be ridden.

IMPORTANT! There is currently a bug with the camouflage, where it doesnt make the Dominator disappear if you log out/relog into a SP game. The camouflage still works though, it's only a visual bug, and doesn't seem to happen on servers. At the moment I haven't yet figured out a fix for this.

The Rig was provided by TruongCGArtist, the model was heavily modified by me, and ALL animations have been done by me.

This mod/code/work is protected by the Attribution-NonCommercial-NoDerivatives 4.0 International Creative Commons License.

We need an Indoraptor
❄ Želvominus Rex

jannaxmas Sep 17 @ 7:24pm
by the way this creature killed its brother as juvenilles

LED Spartan Sep 7 @ 11:40pm
(Coenpeyton)There was an indoraptor mod, the mod itself also came with a Skullcrawler, dono what it's called tho

Coenpeyton Sep 6 @ 8:59pm
I had heard in a video i just watched that was released years ago that MR.Garuga was working on an Indoraptor? Does anyone know how true that was? & If it was whatever happened to it?

M3GA10RD Sep 5 @ 9:03am
id like to personaly thank alll the assholes and pieces of shit who brought this developer to not update anymore, bullies dont deserve to live in this world

HiveBlood Sep 2 @ 5:22pm
Sad that creator of this mod has left modding due to how people attack with their comments. I hope in time they might come back to it. Their mods are really good.
< >