Store Page
Hearts of Iron IV>  Workshop > Zoltarian's Workshop
This item has been removed from the community because it violates Steam Community & Content Guidelines. It is only visible to you. If you believe your item has been removed by mistake, please contact Steam Support.
This item is incompatible with Hearts of Iron IV. Please see the instructions page for reasons why this item might not work within Hearts of Iron IV.
Current visibility: Hidden
This item will only be visible to you, admins, and anyone marked as a creator.
Current visibility: Friends-only
This item will only be visible in searches to you, your friends, and admins. 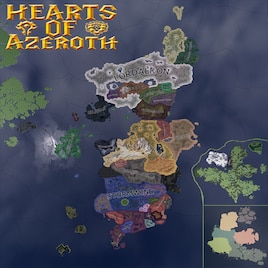 ValianBlue
Online
See all 252 collections (some may be hidden)

Hearts of Azeroth is a total overhaul project to bring the Warcraft universe into Hears of Iron IV. Focusing on the stories of the original games fight as either a member of the Orcish Horde, Alliance of Lordaeron, or one of the Dragon Aspects for control of the Eastern Kingdoms and Draenor, or pick a distant tribe in the forgotten continent of Kalimdor and make your own path, the choice is yours.

We’re hard at work on the next patch 0.4.2 “Dawn of the Aspects” bringing extended racial features, new areas in Dragonblight, and Tel’abim, Several new nations in Kalimdor, A dragon specific tech tree, Hundreds of events for the Dragonflights as well as nations involved in the First War , the return of the Steamwheedle focus tree and a mystery new focus tree. Looking forward to sharing all this content with you guys soon.

Removed Focus Trees:
The Shadow Council, Steamwheedle Cartel, and the Gurubashi tribe focus trees where temporarily removed and put back into development for being unfinished,and behind the scenes technical problems. They will come back soon bigger and better than ever.

Recommended Settings:
Our discord is the best place to organize games, give feedback, or help the team out in any way that you can. https://discord.gg/f799FAs

Special thanks to the many advisers and past developers for every bit of development put into the mod as well as the fans reporting bugs and cheering us along the way.
Popular Discussions View All (4)

Yolosaurus Rex Apr 28 @ 4:34pm
I remember playing the original "Warcraft: Orcs and Humans" wayyyyyyy back in the day.....

Blackwell Apr 11 @ 11:52am
So what are some good divisions? Because I was playing Gurubashi and did the normal 7/2 Inf. Art. and got my shit kicked in by the Bloodscalps

Zoltarian  [author] Mar 29 @ 10:15am
We aren’t updating this for a long time while we work on new features etc, see ornithorinks post below