Store Page
Arma 3 >  Workshop > travolta's Workshop
This item has been removed from the community because it violates Steam Community & Content Guidelines. It is only visible to you. If you believe your item has been removed by mistake, please contact Steam Support.
This item is incompatible with Arma 3. Please see the instructions page for reasons why this item might not work within Arma 3.
Current visibility: Hidden
This item will only be visible to you, admins, and anyone marked as a creator.
Current visibility: Friends-only
This item will only be visible in searches to you, your friends, and admins. 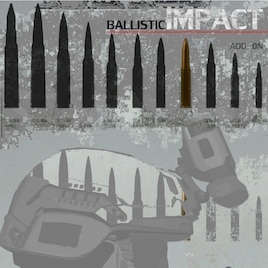 travolta
Offline
See all 2650 collections (some may be hidden)

This item has been added to your Subscriptions. Some games will require you to relaunch them before the item will be downloaded.
Description
A.K.A head traumas.

Requirements: None
Version: v1.15
Signed: Yes
Has to be loaded both on server and on client in order to work on MP

Description:
Headshots on unit cause removal of protective glass, head mounted display and/or helmet of unit depending on damage and armor level, spawns particle effects accordingly.
Factors such as Item present or not, helmet's armor level, weapon caliber and 'chance' taken into account in order to simulate custom particle FX.

Thanks: Hamza 'ElKappucino' for helping with artwork and testing
I RexCityRx I for testing and ideas
654wak654 for support.
Bohemia Interactive for creating Arma.

License: Covered under APL-SA[www.bohemia.net]
Feel free to use and modify this code, on the proviso that you post back changes and improvements so that everyone can benefit from them, and acknowledge the original author in any derivative works.
Reuploading this is not allowed

MDK May 29 @ 2:08am
Although I like this mod a lot, the fact it seems to trigger insta kills on headshots in ace is a little offputting, especially when fighting against enemies with buckshot, as a singular round from half a mile away will blast off the headpiece AND kill the player instantly.

APPLEPIE2 May 15 @ 3:01am
every time the mod works frame drop accumulation

Mickey Apr 12 @ 3:35pm
@getoutI tried to reduce the particles in game setting to PARTICLES/ STANDARD but still I see a lot of particles. Looks like game settings don't affect your mod. Please try creating a setting inside your mod

Mickey Apr 12 @ 1:40pm
@getout your mod is one of the best mods for Arma3. At least that's how it looks to me. The only detail I don't like is the amount of particles when hitting the head (helmet). Everytime, when bullet hits in the helmet of soldiers and kill them, I'm see huge numbers of sparks in NVG player vision. There are too many sparks! Each such hit looks like New Year's fireworks and, unfortunately, it does not look realistic. In game settings, PARTICLES I use value HIGHT. This works great for all visual effects, including the Blastcore mod, however the PARTICLES/HIGHT value is probably too high for your mod. Or in general, there is no relationship between this game setting and your mod. I have to ask you. Please add the ability to set the number of particles for the user of your mod. It would be great! The player could customize everything to their liking. Thank you!

Jinkis Mar 31 @ 8:21pm
@ringo It's okay man no need to gaslight, there's nothing wrong with that part of the work, it's just not to most peoples taste as Arma is a realistic game, no shame whatsoever. Because people like and want to use the mod (because it's good) but don't want the extreme blood effects, there's a great solution that I pointed out. Those blood effects would be good as they are for Warhammer mod users btw!

Jinkis Mar 22 @ 1:26am
The blood effects are extremely offputting in every way, but you can easily delete the PBO. If you're wondering what they are like, they are larger than the size of the persons body.

Is there a way to deactive the "Helmet And Facewear Destruction" but still having the effects of impacts?
< >