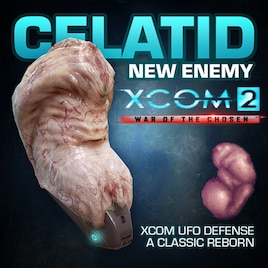 Ashlynne_Lee
Offline
See all 2103 collections created by MrShadowCX and other people (some may be hidden)
You need DLC to use this item.

NOTE: Stenchfury and Ashlynne_Lee are not officially members of CreativeXenos but I Shadow79 have worked with each of them very close on this mod and Ashlynne_Lee has helped out with a few other mods, I personally consider both as close members of the unit so its only fitting to credit them both for their fine work! Also, without Stenchfury who created this throwback Alien from the ground up, this mod would not have happened. So a VERY BIG THANK YOU from CreativeXenos to you sir!!

As you can all see, the Celatid Alien is a re-imaging of the CLASSIC CELATID for the CLASSIC XCOM UFO DEFENSE!


The Celatid will show up in 3 versions.

Celatid Grub:
The Celatid Grub is just that, a newborn that looks white in color (like a grub). It shows up early in the game has 6 to 7 HP depending on Diff level. Can spit a deadly corrosive acid. This acid is shot much like a weapon, in that its a % based to hit ability unlike the Vipers poison spit that hits all the time. So IT CAN AND WILL MISS. BUT... if it does hit, it will SHRED ARMOR because of its corrosive nature. If hit, you will take a small direct some of damage but also take acid damage.

The Celatid Grub can also do a direct close combat attack called poison Cloud. It will move in close and dispenses a poison cloud attack that will poison the target if hit and can add stun or disorient the target.

Celatid Pupa:
The Celatid Pupa is pink in color (based off the classic look) and does everything the Grub does except it has more HP. Is the general form of the Celatid, can heal 2 HP a turn like the Faceless. Is more of a Mid-game unit.

Celatid Adult:
The Celatid Adult is Brown/Purple in color to show its age with the darker coloring. Does everything the first 2 Celatids can but also has increased HP, can heal 2 HP a turn like the Faceless and can (IF IN TROUBLE) call in reinforcements in the form of more Celatids and or Faceless. In our new lore, the Celatid and Faceless are from the same world and the Celatid can also be used as a Terror unit.


Once Autopsied, you'll be able to use corpses to build a new type of sword called the Scimitar. 3 versions with each having an innate ability to cause poison damage as well as a slight base damage increase. These Swords are built on a PER SWORD bases. And you'll need the tier 1 sword to upgrade to tier 2 and so on. These ARE NOT squad wide built. Each sword has additional abilities as you upgrade them.

You will also be able to use a Celatid Corpse with resources to build (DEPLOYABLE CELATID TURRETS) these look like a mimic becon that you throw. But once thrown, you'll deploy a flying turret that is a Celatid grafted to a turret. They have a good amount of HP and 1 armor. If you do not move them, they can fire twice and overwatch fire twice if needed.


The Celatids are immune to poison. They can be disoriented, panic and mind controled/dominated and can take damage from acid. They cant be stunned. The same immunities apply to the XCOM Celatid Turret. It IS AN ALIEN with an attached turret.


NEW ADDITIONS: The Celatid Turrets now START OUT as a base line turret. Their HP has been lowered a bit and they now have a Conventional weapon. They no longer have unlimited ammo (was too OP with lost). The Celatid Turret can now interact with elevators in Shens Last Gift DLC. They can also call in Evac points and Evac themselves if needed. Can also lift off with Avenger in Base defense missions.

The Celatid Turret Mk2 needs to be upgraded from the base version (just like you do with Scimitars in this mod). The Mk2 is the Mag version. More HP, better stats, can be deployed 1 space farther and can use the Demolition ability. Great for enemies in cover that you can not get a high % chance to hit. Use Demolition, remove its cover and let your other troops take the enemy out ;)

The Celatid Turret Mk3 is the upgraded Beam/Plasma version. Again, more HP, better stats, has Demolition and also has high Cover Generator. If its sitting in place shooting and doing its job, why not use it as high cover for your soldiers?

Kiruka Oct 8 @ 11:02am
Would it be okay if I made versions of the Deployable Celatid Turrets for my Buildable Units mod? I wouldn't need to integrate any of Celatid Alien's code or visual resources. I would just be referencing their archetypes and abilities within my own code, making Celatid Alien an optional dependency for folks who want to play with them.

Boobus Aug 18 @ 9:08pm
Following up on Dtone's post from April 29. When you deploy the Celatid turret the game no longer allows you to see into buildings/structures. Is there a fix for this? also, I researched the magnetic scimitar but it doe snot show up as an option for my Rangers. Thanks for any help you can provide!

mfitz1970 Jul 26 @ 8:40am
@ObelixDk awesome mod very much like from the XCOM game any chance you guys plan on making anything else from that time like the saucer that flips up and turns into a cannon that was a mean enemy to fight.

RedDobe Jun 17 @ 10:09pm
I am not sure how to end a fixed evac mission with the celatid turret without using console command. I have to use the ttc console command to place the turret in the evac zone otherwise they get left behind, or on a mission like blacksite, you can't end the mission. Is that intentional?

Exsanguinius Jun 11 @ 11:56am
when you research the turret. where you say sapient I think the word you want is sentient.

Dtone Apr 29 @ 10:34am
Love the mod, used it from the start in my last campaign, I was having issues after deploying the turret later in the game where you cannot see through buildings and levels of buildings thus making it very difficult to finish a mission. Is there anything I can do to fix that?

4rrakis Mar 14 @ 2:46pm
That is what happens if you add mods with new resesarch during an ongoing campaign.
< >