Store Page
XCOM 2>  Workshop > Ginger's Workshop
This item has been removed from the community because it violates Steam Community & Content Guidelines. It is only visible to you. If you believe your item has been removed by mistake, please contact Steam Support.
This item is incompatible with XCOM 2. Please see the instructions page for reasons why this item might not work within XCOM 2.
Current visibility: Hidden
This item will only be visible to you, admins, and anyone marked as a creator.
Current visibility: Friends-only
This item will only be visible in searches to you, your friends, and admins. 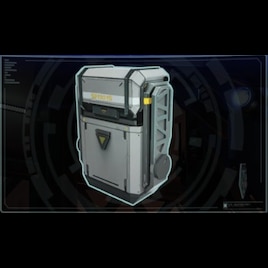 XCOM 2: War of the Chosen
Required items
This item requires all of the following other items
[WotC] Mod Config Menu
WotC Mod Everything Reloaded
Created by

Ginger
Offline
See all 3930 collections (some may be hidden)
You need DLC to use this item.

This item has been added to your Subscriptions. Some games will require you to relaunch them before the item will be downloaded.
Description
This mod, as many of you have noticed, has been developmentally abandoned. I've finally got enough of the Highlander conversion done that I put it up on Github. You can follow its development here[github.com]. Feel free to post issues with the current mod on that Github page, and I'll do what I can to make sure they're fixed for the Highlander version.

I decided to change the name to G's Loot Mod, given that, by the time the mod is finished, I will have rewritten almost the entirety of Grimy's mod twice over. I feel like, at this point, it's my mod. However, all the inspiration and original work, including most of the upgrades and their abilities, did come from Grimy, which is why I left it as a simple initial - it can refer to both of us.

Also, the real reason I changed the name was because "GrimyLootModWOTCHL" just looked silly.

Balance Thoughts:
Supply/Intel rewards are not as relevant in the lategame. This mod helps offset that

Epic and Legendary Tier upgrades don't drop until the mid and late game, but are intentionally very powerful. Legendary tier upgrades are around as powerful as colonel level perks.

Compatibility:
By overwhelming request, this mod is fully compatible with Loot Pinatas.

Known incompatibilities:
Configure Upgrade Slots- only one of the mods’ UIArmory_WeaponUpgrade classes will fire, so either you have your configured slot count or the number that this mod sets for individual items. Can’t have both.

GrimyLootUpdateResearch
Use in case you can't see your research

GrimyLootBuildLootStoreFromHistory
Adds Update 20 features to gear obtained from loot boxes before Update 20. Fixes the "Obtain Continent Bonus To Unlock" issue keeping you from accessing all of your gear attachments/upgrades.

Q - How do I add weapons/armors from other mods to the lockbox drops?
A - Please give this link to the author of the other mod if that mod doesn't already add their items to my loot mod automatically.
You can also edit the INI yourself to add new items to lockbox drops as well.

Q - How do I get randomized appearances for sidearms?
A - You need a highlander mod that supports it. I don't know if WOTCCommunityHighlander supports it, as I do not use that mod. You can try it.

Q - I'm not getting any drops!
A - Try deleting your config folder:
\Documents\My Games\XCOM2 War of the Chosen\XComGame\Config

Q - I'm still not getting any drops!
A - You have another mod that is modifying the loot drop tables and is being loaded before this one. Delete your Config folder again and also uninstall any mods that modify the loot tables.

Q - How do I change drop rates and other settings?
A - You can find the relevant ini files in the following directory:
\steamapps\workshop\content\268500\1142377029

Q - Why are my swords showing +20/100 aim?
A - Not caused by this mod, probably caused by balanced ranger swords or something else in your load order.

Q - I'm getting so much more / so much less loot now, please fix!
A - This mod doesn't alter drop rates of vanilla items. Either another mod is doing that or it's just RNG.

Q - I can't open my loot crates!
A - Use the GrimyLootUpdateResearch console command.
No it doesn't disable your achievements.

Q - I'm crashing at mission end!
A - Not anymore, you're not! (Actually, if you still are, please tell me. Those should've been fixed completely.)

Q - I'm crashing somewhere else other than mission end!
A - Excellent! Or, rather, not so excellent. Please post details in the comment section, and I'll reply when I'm able.

Special Thanks to:
GrimyBunyip - The original creator and therefore the creator of most of this mod
RealityMachina - Answerer of dumb questions, extraordinaire
robojumper - master of UI Kung Fu and patient teacher
Musashi - For the idea on how to implement the Update 20 changes safely, without crashes
PopeUrban, Haddox - Art Assets
sebkulu - French Translations
Thunderbeast, karavolt - Korean Translations
Вожбан-Литрус Вопурт-Тритьюдар, tr0ll - Russian Translations
Wraxil - Implementation for continent bonuses
bithir - Providing the integral "crashing save file" that helped fix the end-of-mission crashes
Popular Discussions View All (17)

Adding support for Grimy Loot Boxes to your mod
Ginger

benyamun Jan 20 @ 11:51pm
@ImLinkn - thanks for pointing that out. Went back to read the github (https://github.com/long-war-2/lwotc/wiki/Mod-compatibility-%28community-maintained%29) and it says "Only will drop conventional grade weapons by default". I'll try that first.

benyamun Jan 20 @ 11:54am
Hi - running this mod and LWOTC. Not sure why, but only getting "basic" level weapon drops from unlocked loot boxes? Currently past Magnetic Weapons and Warden Armor, and still not getting anything. Appreciate any insight or help!

KISS_Barry Jan 16 @ 1:22pm
It took me several hours to get it working. Use XCOM Alternative Mod Launcher. Do not use highlander smirmisher reloaded, get a grip rifle, loot post mover. On mod launcher goto options>settings>active arguments enter -allowConsole. Shutdown PC (this is important). Restart all. When in game bring up console and enter the GrimyLootUpdateResearch and GrimyLootBuildLootStoreFromHistory in console. Mods that work are the basic mods like evac all, no more stunlancer, weapon tweaks, still stop wasting my time, shutguns crit, vector crit, more squad sizes. You can edit the loot drops in mod menu in game. Loading via normal XCOM 2 launcher will not work and certain mods also will not work with it. best to do is start new game and only have this mod and its 2 dependant mods. also in the 'early' game i did not get any grimy loot boxes but they do drop a lot after the reaper and smirmisher missions gl

Pokemastuh Jan 15 @ 6:45pm
Only one to do that so far for me is the psiamp zombie mod but that might be one of those dependant mods. Don't recall rn.

tterb_25 Jan 15 @ 6:11pm
Does anybody know why none of the new weapon mods actually do anything? I am using the AML and only have this mod and the two dependent mods installed. When I have a weapon mod that says it is supposed to increase mobility it doesn't actually change the soldiers mobility when the weapon is equipped. Any input would be really appreciated.

Celeritas Jan 11 @ 5:00pm
If anyone is editing the XComMod file with RequiresXPACK=true, you need to change the description to get rid of the [ character to make this work.

ImLinkn Jan 9 @ 10:57pm
@Dante You should. Did you not get the loot in the missing debriefing?

Dante Jan 9 @ 6:47pm
If I kill the last enemy and it drops loot and then the mission ends, do I still get the loot?