Store Page
RimWorld >  Workshop > falconne's Workshop
This item has been removed from the community because it violates Steam Community & Content Guidelines. It is only visible to you. If you believe your item has been removed by mistake, please contact Steam Support.
This item is incompatible with RimWorld. Please see the instructions page for reasons why this item might not work within RimWorld.
Current visibility: Hidden
This item will only be visible to you, admins, and anyone marked as a creator.
Current visibility: Friends-only
This item will only be visible in searches to you, your friends, and admins. 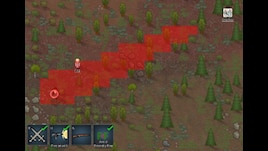 falconne
Offline
See all 20442 collections (some may be hidden)

This item has been added to your Subscriptions. Some games will require you to relaunch them before the item will be downloaded.
Description
This mod has performance issues with lost of pawns. Unfortunately I don't have time to improve it, but the code is on Github if anyone can help.

Colonists with the option enabled will not take a shot if the projectile's path could hit a friendly or neutral pawn (taking into account miss radius). Drafted colonists will look for a target with a clean shot (or wait if there isn't one), while hunters will reposition themselves.

This should hopefully alleviate some of the micromanagement needed to stop ranged colonists shooting friendlies, without changing the way friendly fire works in the game or reducing its potency.


== Usage ==
Any colonist with an appropriate weapon will show an “Avoid Friendly Fire” toggle button when they are selected (which is On by default; you can toggle it off for individual colonists). With this On their AI will automatically do the right thing.

If you manually try to force a drafted colonist who is set to avoid friendly fire to shoot an enemy with a friendly in the way, you will see a "Cannot hit target" message as you would if LoS was blocked.

Shooters who are being blocked by friendlies (but would otherwise have a target) will have their name on the map and in the Colonist Bar be written in cyan. Likewise, the first friendly blocking any shooter will show up in green.

There is a setting in the Mod Options screen to always enable 'Avoid FF' status on a pawn when it's undrafted. If you tend to disable the 'Avoid FF' setting on pawns during combat, using this option will ensure it is always turned back on again before the next combat. This option is off by default.

== Shield Belts ==
Shooters will not worry about pawns wearing a shield belt with at least 10% power standing in the line of fire, so you can still use shielded infantry to attack while ranged troops continue to fire over them from behind. If the shield drops below 10% power while the pawn is still subject to friendly fire, then the shooters will stop. They will resume shooting after the shield gets above 10%.

This behaviour can be disabled from the mod options if needed.


== Targeting Overlay ==
If you use the game’s manual targeting button (the one with the B hotkey that then shows the weapons range), you will see a red overlay that appears from the shooter to where you point the mouse (see image). This overlay shows the potential “fire cone” from a standard ranged weapon in the game, from the shooter to a target under the mouse (miss radius depends on weapon and shooter skill). Any pawn within the red overlay could potentially be hit. This is purely a visual aid for planning and can be disabled from the Mod Settings menu if you don’t like it. Note that pawns within 4 tiles of the shooter do not receive friendly fire, so the overlay does not mark them red and the mod takes this into account when deciding if a shooter should stop. In the example image the shooter on the top right will not shoot the pirate on the bottom left because the colonist "Flip" could potentially get hit.


== Animals ==
By default the mod will also take into account animals with an assigned master and protect them from friendly fire, so you should be able to use and release trained animals without them getting shot. In the Mod Settings you can expand this to include all tamed colony animals, such as livestock, but this is off by default as it could be annoying and cause performance issues on slower machines.

This mod is compatible with the Combat Extended mod, however the more complex fire trajectory in CE may mean this mod may not be 100% effective at very long ranges.

It is an often requested feature to add FF avoidance to turrets. However I want my mods to be pure QoL changes and not affect the balance of the game. The improvised turrets are cheap and friendly fire is an intended weakness of them (as mentioned in their tooltip). I am happy for another mod that adds smarter, more expensive turrets to incorporate my code to provide that functionality.


== Current Limitations ==
* Does not support explosive weapons such as grenades and weapons such as miniguns with a large forced miss radius. They will be used as normal and you will need to micromanage them as before. These might be supported in the future.

* Will protect neutral pawns on your map, but not animals owned by them. E.g., if there are traders around during a raid, your colonists will avoid hitting them but not watch out for their animals. Should be fixed in the future.

* Only affects the AI of your colonists. Does not prevent the computer controlled factions shooting their own troops; that’s a hard problem.

* Only affects the AI of shooters, who will stop shooting when someone gets in the way. Nothing is done to stop undrafted pawns from wandering into the middle of battle; again a harder problem to solve.

Could it be that AFF is keeping track of even non friendly pawns?

Sig Nov 11 @ 6:39pm
Also experiencing massive lags with 9 pawns drafted and the prevent friendly fire toggle is set to on. Zero lag when set to off. i7-11700K and 32gb ram

four12 Nov 4 @ 8:18pm
@sindri42 - nope, no combat mods installed. A couple work-related ones, like Free Will and PUAH. Never had any issues until 1.4. I'll try reenabling it and see what happens... the wind is blowing from a different direction today.

sindri42 Nov 3 @ 10:56pm
I haven't been having any issues with drafting or lag (though I haven't had many pawns in combat at a time yet). Are you combining this with some other combat mod?

Damgam Oct 31 @ 11:14am
Having avoid friendly fire enabled and 10 pawns walking around in combat outside gave me insane 1 second frezes every few ticks when pawns were walking in and out of friendly fire range... It's borderline unusable in this state :(

Jolt Oct 30 @ 12:32pm
Just recently my game says this is no longer compatible with combat extended... does anyone know why or how to fix?