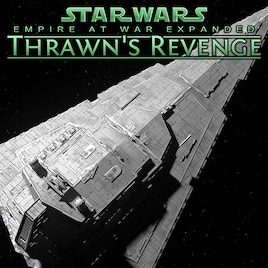 IRampagingRhin0
Offline
See all 1485 collections created by Corey Loses and other people (some may be hidden)
You need DLC to use this item.

This item has been added to your Subscriptions. Some games will require you to relaunch them before the item will be downloaded.
In 1 collection by Corey Loses
Empire at War Expanded Mods

The death of the Emperor has left the galaxy in disarray - command one of 9 playable factions as they strive to establish themselves as the next galactic power, with an array of new units, heroes, planets and scenarios with extra story-driven content, and new mechanics inspired by 4X and Grand Strategy titles. New and updated content is added monthly.

In addition to Thrawn's Revenge, we make a Clone Wars mod with similar features, Fall of the Republic.

In Empire at War: Expanded, the traditional Empire at War tech level is traded for an era-based system that impacts different story events, factions, unit rosters and heroes are available, with the galaxy set up to recreate various conflicts within the Star Wars Legends lore after Endor. There are also new government mechanics where you can help elect the next New Republic Chief of State to gain different advantages (with other government styles coming over each patch), along with a planet loyalty system, giving extra income, unique units, and other bonuses at high levels, but with other negative effects if your member worlds become too unhappy with your leadership.

If you would like to join early testing or keep track of updates, the best place to do it is on our Discord server[discord.gg] or by following Corey Loses for preview playthroughs and other news videos.

Running the Mod
To play: After subscribing, make sure to let the download finish (see your Steam download manager, it'll say at the bottom of your Steam client), then launch Forces of Corruption. Once ingame, go to the Options menu, then Mods, and enable it from there.

If the game doesn't re-launch when you enable the mod ingame, or you want to just directly launch into the mod, go to the properties for Empire at War in Steam and paste the following into launch options:
STEAMMOD=1125571106

OFFICIAL SUBMODS
Shield Penetration: Allows missiles to bypass shields, for those who absolutely need it.
https://steamcommunity.com/sharedfiles/filedetails/?id=2083545253

IF TEXT JUST SAYS TEXT_SOMETHING_SOMETHINC
The mod is designed for English language versions of the game, so if you have a non-English version, your text may be missing. To fix this, to into:
C:\Program Files (x86)\Steam\steamapps\workshop\content\32470\1125571106
And rename the MasterTextFile_English.dat to MasterTextFile_YourLanguage.dat
Popular Discussions View All (1232)

No, the only things getting damaged/destroyed were parts of the orbital garrison and the Golan, but the itself shipyard sustained very little if any damage.

spartan078ben Nov 25 @ 5:15pm
Has anyone else gotten a crash when trying to invade the Maw installation?

Are they getting heavily damaged? It's a vanilla feature that heavily damaged stations will downgrade. I'm not entirely sure how it works to be honest only that it is a feature from the base game.

Both the CSA and New Republic should still have the Marauder. Do you mean something else?

CitrineCastle Nov 25 @ 11:49am
In GC after every defensive space battle my space stations disappear and I have to rebuild them, despite me winning the battle and the station not being destroyed.

Scrimge Nov 25 @ 3:03am
were marauders removed from the mod?

Lord Admiral Daniel Phillips Nov 24 @ 12:39pm
That would be the Eriadu Authority, they start in the south around... well... Eriadu.

BossNgalot Nov 24 @ 11:51am
Which Imperial factions can build the assertor?

BigBacon Nov 23 @ 7:45am
I'm not sure how you're having trouble keeping up with resources. It's incredibly easy to get and keep up a surplus without building food/part buildings on every planet you conquer. Each building gives +10 of each resource so you can easily support 10 planets per food/part building built as long as said planets don't consume more food or parts. If they do, just build another one or take planets that give food and/or parts by themselves without any of the buildings needed.
Calling this stupidly easy mechanic 'multi-dimensional chess' is a bit of an exaggeration.

Good_Oatmeal Nov 22 @ 6:57pm
This way I could focus more on the actual game play and really truly deeply immerse myself in the mod and the space and land battles. I could just sit back and relax, and not worry about playing multi-dimensional chess with my resources when I really just want to play with admiral thrawns faction and take over the galaxy.

I pour my heart out to the mod devs. This is 100% sincere honest feedback, shared with respect. Thank you for making this mod, and thank you for reading this at least. Have an awesome day and thank you again.
< >