Store Page
Master of Orion >  Workshop > WhatIsSol's Workshop
This item has been removed from the community because it violates Steam Community & Content Guidelines. It is only visible to you. If you believe your item has been removed by mistake, please contact Steam Support.
This item is incompatible with Master of Orion. Please see the instructions page for reasons why this item might not work within Master of Orion.
Current visibility: Hidden
This item will only be visible to you, admins, and anyone marked as a creator.
Current visibility: Friends-only
This item will only be visible in searches to you, your friends, and admins. 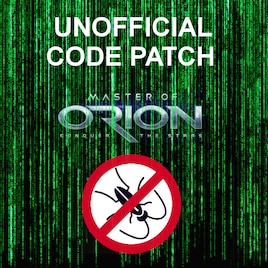 WhatIsSol
Offline
See all 77 collections (some may be hidden)

This item has been added to your Subscriptions. Some games will require you to relaunch them before the item will be downloaded.
Description
VERSION UCP 6.3a

To make this mod actually work you MUST follow the included “ReadMe.txt” for the install instructions. This must be done everytime you want to upgrade to the new version!

This mod actually makes NO game modifications. It is just the files for the Unofficial Code Patch delivered via Steam Workshop.

This mod is available here: https://www.moddb.com/mods/ucp for non-steam users.

:::: Fixes Included in this patch
Bug.0.0.6.3a: <UCP 6.3> Endless processing turn caused by an unreleased change in Antaran Victory Scores
Fix.0.0.6.3a: This is something I was going to add to 6.3, but decided to remove and did a poor job of removing correctly. Correctly removed the code for this.

Bug.0.0.6.3: GetPlanetRating has no adjustment for rating based upon distance from empire. This leads to the AI sometimes moving large distances to colonize a planet.
Fix.0.0.6.3: Added logic to calculate distance from a planet and the closest empire point. Adjustment is based upon the unused AI's "cohesivity" personality setting.

Bug.0.0.6.3: A hostile presence in a star system will prevent the AI from moving, even if it could escape on a warp lane
Fix.0.0.6.3: Added logic to have the AI check the destination star system for hostile forces instead of the current star system

Bug.0.0.6.3: When assign ship construction the AI starts with the most costly ships, but checks colonies in order acquired. This can lead to an inefficient build of large ships.
Fix.0.0.6.3: Added logic to sort colonies by production output and ship reduction structures, thus making it more likely that larger ships will be built at more capable colonies

Bug.0.0.6.3: AI colonization does not check current location of colony ships when assigning tasks. This can lead to a colony ship that is in a system that has a desirable planet to get assigned to a different colony ship.
Fix.0.0.6.3: Added a pre-check on allocation so that an in system colony ship will always be preferred

Bug.0.0.6.3: Fleet combat calculations for a fleet can result in a result of infinity, this leads to the combat chance result being completely incorrect
Fix.0.0.6.3: Added check to detect this condition and return the max float value instead.

Bug.0.0.6.3: Issues with Tactical Orders in this game results in the game mistaking creating maneuver orders basically every frame, this makes absolutely no sense
Fix.0.0.6.3: Removed the redundant calls, that would just slow the game down and fragment memory. Now the current maneuver order will complete instead of being restarted over and over again. I would expect at minor speed improvement for tactical combat with this change, especially on large battles.

Bug.0.0.6.3: Augmented Engine usage by the AI has an incorrect check resulting in it firing when the ship is within the attack envelope.
Fix.0.0.6.3: Adjusted firing logic so the boosters will be used to enter the attacker envelop.

Bug.0.0.6.3: AI diplomacy when asking for Shared Charts has an incorrect operation, it is taking the min of 100 or the unknown stars/planets calculation using the YAML settings. So when asking an omniscient race this will almost always result in an offering value around 100
Fix.0.0.6.3: Corrected this operation, to use the max of 50 or the calculation

Bug.0.0.6.3: Lucky Trait is not making the race 50% resistant to negative random events. This is due to a mistake in the random number type being generated in comparison to the racial trait
Fix.0.0.6.3: Corrected logic so random type is a float and will generate 0.0 to 1.0 values instead of 0 to Maxint

Bug.0.0.6.3: Population growth on mixed race planets has a bad calculation that results in races with higher growth rates having less chance of being selected as the next population unit.
Fix.0.0.6.3: Adjusted check to reverse this

Bug.0.0.6.3: If a Leader is in transit to a ship that is destroyed and the civilization does not have the Survival Pod tech, the leader is killed anyway
Fix.0.0.6.3: Take 2 on correction this logic

Bug.0.0.6.3: Colony Notifications leave the galaxy indicator after they are closed
Fix.0.0.6.3: Corrected logic so they are removed with the notification button

Bug.0.0.6.3: Trade and Research Treaty are recalculating cost after signing. This can lead to the deal failing if the recalculation cost is too high.
Fix.0.0.6.3: Removed code that is recalculating the cost. It is now only be calculated once when the deal is first setup.

Bug.0.0.6.3: The AI can sometimes attempt to force a structure to be built. When this happens it does not properly check that an upgrade of that structure does not already exists, resulting in the colony building nothing.
Fix.0.0.6.3: Added a check to make certain the colony can actually build this forced structure, otherwise ignores force build

Bug.0.0.6.3: The planet UI does not have a sound effect for clicking on the "use Autobuild" option
Fix.0.0.6.3: Added sound effect, also added one for the "Auto Cleanup" option as well

Bug.0.0.6.3: Fleet combat calculations has a flipped check if one side is unable to harm the other this leads it to think the side that can do no damage will win the fight
Fix.0.0.6.3: Just set the winning side correctly.

Bug.0.0.6.3: Economic Victory conditions are set by the number of major civilizations alive or dead, this makes this condition easier to win as races die off
Fix.0.0.6.3: Adjusted check so that is looks only at the major civilizations that are still alive to determine the winning percent needed

Bug.0.0.6.3: Space Monster Eel's lightning field does not work as the ShipModule has an invalid weapon type
Fix.0.0.6.3: Switched the ship module to be use the same weapon type as used by the Amoeba

:::: Enhancements
Add.0.0.6.3: Adjusted Options -> Content Menu to include the "Maintain Zoom on Panning" option to make it easier for people to turn that on/off. Also added code to support setting of defaults for this page with the new UCP settings.

Add.0.0.6.3: Added Galaxy Sensor Range indicators. This shows the sensor range of all ships, colonies, etc for the player. This can be toggled on/off using the "`" key or by going to the Options -> Content Menu and selecting the option "Show Sensor Range"

PINNED: UCP to work on MacOS using these steps
WhatIsSol

WhatIsSol  [author] Nov 2 @ 5:48pm
@usane: The minor civ sounds like a bug, but without a reproducible save not something I would look at.

Your second issue is when u deactivate a mod like 5X it messes up the settings for a new game. Start a new game and pay attention to the advanced settings, cause it sounds like "Allow Racial Traits" got toggled off.

usane Nov 2 @ 4:13pm
2.This is surely a mod bug, I don't know though if it is UCP or 5Xmod bug. I have UCP 6.3.a installed as default. Recently i installed the 5x ultimate balance mod to try it out. After the tryout I deactivated it since i have an ongoing game-play without it. After deactivation a lot of thing doesn't work. Well, probably not altered my ongoing game-play, but in a new game for example the racial traits (custom race) was bugged. For example, the creative trait didn't give all tech in the field. I didn't check the research bonus, i will check it later. The red fungus special also did not work. These are what i experienced at first, but i'm sure other racial traits also have some issue. Try to check it more deeply if i will have time.

usane Nov 2 @ 3:58pm
Hello!
During my latest gameplays i have found 2 bugs.
1. I don't know if it is UCP, but i note it anyway. In my previous game-play, there was a minor race that was revealed by map sharing. When u sent a ship there it was not introduced.Later, i don't know why, when one of my other ship arrived there the introduction was worked.

WhatIsSol  [author] Oct 22 @ 7:39am
Not on purpose, but language translations depend upon the interest of someone that can read/write the language. If there is something specifically wrong and you want to provide proper translations I would include in the next release.

Varek GrimmReaper Oct 22 @ 7:27am
huhu, great mod, awesome good work. I have translation problems since last year. it is not german anymore?

Zaanzabar Oct 18 @ 4:56pm
So I installed this using the java installer, but it gave 3 errors. It said that the 2 .csv files, and the description.txt files failed to be found. I apologize if this has already been asked. Is there a fix to this? is it safe to try to copy those manually from the zip or something?

WhatIsSol  [author] Oct 8 @ 2:14am
There is also the pinned thread on the Discussions page that contains the full text for the readme file.

I have updated that to hopefully be clearer in the description.

WhatIsSol  [author] Oct 8 @ 2:03am
The readme is contained in the Zip file. It is also part of the downloaded workshop. The location of which is detailed above: