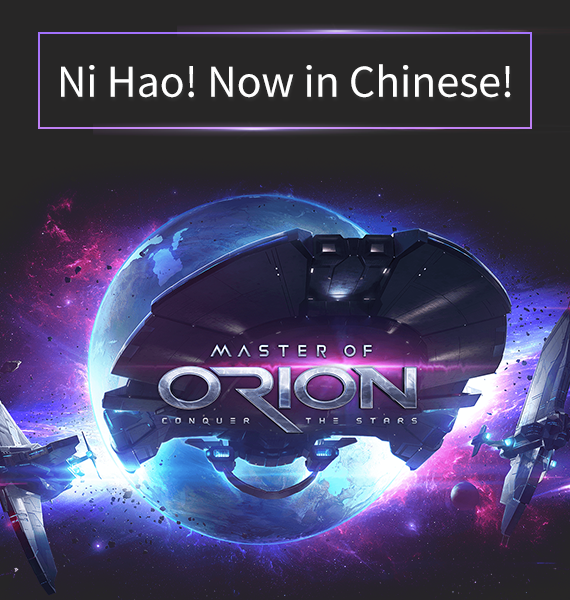 We have noticed an interest in Master of Orion among our Chinese players, so have released a small patch with language support for the players from this region. This patch does not make any changes to the gameplay.

This version introduces the following languages:

We have just released a minipatch that tackles the following ingame issues:
Conquer the Stars!

Today we released an update that addresses certain issues present in the last build. Read on for the full list of changes:

Enjoy the upgrades and Conquer the Stars!

Please Note: If you are playing with mod's enabled and run into issues with the new version, please patch to the 54.11 - Revenge of Antares branch to continue your game with the old mods.

Today we’ve released a new version of the game manual, which can be found in the local files of Master of Orion (Game properties / Local files / Browse local files / Manuals).
The updated version includes the Revenge of Antares features. Let us know what you think about it!

We also want to inform you that a new stability patch is currently being worked on, and it should be released in the near future.

Thank you for your ongoing support and for all the Conquered Stars!

Today we have released a hotfix patch for Master of Orion. Thanks for all the reports that have made it possible!

Today we have released a hotfix patch for Master of Orion. Thanks for all the reports that have made it possible!

A hotfix is now available for download, if it hasn't already updated for you. It addresses some of the issues you've reported since version 54.6 went live last week.
Below you can find the patch notes.

Balance
Bug Fixes
Thank you for all of your reports, and please keep the feedback coming!

Today 1st of December we are proud to present you what is one of the biggest game updates since the beginning of Early Access. As you may notice, this build has some obvious influences from Master of Orion II, but it is also the result of processing a lot of feedback that you have been provided since it all started. So once again, thank you for your input and support.
https://www.youtube.com/watch?v=skHvOO9YUnc
The new content can be divided in two parts:
IMPORTANT NOTE: due to the heavy gameplay modifications, your old savegames won’t be loadable once you update the Master of Orion client. In order to allow you to finish your ongoing games we have enabled a Steam Branch which contains the build 51.3, you can access it by going to the game properties/betas and selecting the option “version51 — Pollution and Gravity Update”
Also, please be advised that old mods may cause issues with the new version of Master of Orion, so you may need to update them (if a new version is available) or deactivate them.
Read on for the full patchnotes, and as always we are eager to get your feedback!

November 18, 2016 — The battle to conquer Orion is set to become even more challenging. On December 1, Master of Orion’s anticipated “Revenge of Antares" DLC will become available, giving access to independent civilizations, a new victory condition and more. The expansion also introduces three new playable races to the massive galaxy. Arriving in the DLC expansions are the Trilarians, Gnolam, and Elerians — formidable aliens that will open up new paths to victory as commanders strive for dominance of the galaxy.

“We’re excited to introduce new content for players of Master of Orion,” said Jacob Beucler, Publishing Product Director for Master of Orion. “They will find themselves in a new environment, filled with new challengers, adventures and new enemies to face off with or forge an alliance with. This content will add new dimensions to the game’s already robust lore.”

Three of the newly available races (Trilarian, Gnolam and Elerian) can be purchased in a single bundle. With the addition of these playable races, the possibilities and strategy multiplies as players forge their galactic destiny in even more unique ways.

Additionally, as a response to the dedicated Master of Orion player community, a free expansion will also be offered to all players. This expansion deepens the gameplay by allowing them the ability to recruit new leaders to their side, battle the fourth new, non-playable race; the Antarans and interact with independent civilizations.

So, just who are these new alien races and what roles do they play in Master of Orion? The aquatic Trilarian are a peaceful race that has abandoned the concept of war. However, when a true threat presents itself, their resolute honor compels them to fiercely fight for their objective.

The Gnolams are known as the most skilled traders in the galaxy, basking in the decadence that their wealth and luck brings them. This charmed race is the constant benefactor of good fortune, making them beneficial allies or cunning enemies.

The elegant yet xenophobic race the Elerians, present an interesting and exclusive aspect to the game. They will trade and communicate with other races, yet reject any potential negative alien influence on the Elerian culture. This resistance to all outside cultures makes them uncompromising foes.

The Antarans are a mysterious race genetically engineered by ancient and unknown masters. In time, they have become deeply war driven, bent on a fervent path of galactic expansion. Heavily militarized and despotic, the Antarans move through the galaxy bending all they encounter to their will.

Master of Orion DLC will be purchasable for $9.99 via Steam


About Master of Orion
Master of Orion is a modern rebirth of the critically acclaimed sci-fi strategy game. The forerunner of the influential “4X” style, Master of Orion builds on the iconic explores, eXpand, eXploit, and eXterminate, gameplay that the original game pioneered. This reimagined title stays true to its legacy, delivering on the promise of deep strategy, hard fought battles, diplomacy, and exploration—all with a healthy dash of humor.

Players can expect a fresh perspective on the original 10 races, each offering different styles of play. Within thousands of ever-changing galaxies, hundreds of unique technologies, and dozens of ships waiting to be tested, no two games will ever be the same.

About Wargaming Labs
WARGAMING Labs is an organizational unit within Wargaming that acts as a breeding ground for new ideas and solutions. We believe that people and companies with great ideas should be given an opportunity to shine and those with talent should be nurtured.

WARGAMING Labs is aimed at testing and implementing innovative projects created within Wargaming or shared with us. It will generate, evaluate, and launch in-house products that go beyond the company’s paradigm, as well as support external development teams in game’s creation and publishing.
Here we experiment with new game mechanics, platforms, services; business models, and create new products at the company’s studios in cooperation with 3rd party developers.

Wargaming will work with internal and 3rd party studios worldwide, publishing games across a number of platforms. We believe that good ideas become great when working together and are open for collaboration.

Today we released a mini update to address some of the issues what you have reported since v51.2 was deployed. Read on for the notes, don’t hesitate to report if any other ongoing issue and please keep the feedback coming!