Store Page
Transport Fever>  Workshop > Klamann's Workshop
This item has been removed from the community because it violates Steam Community & Content Guidelines. It is only visible to you. If you believe your item has been removed by mistake, please contact Steam Support.
This item is incompatible with Transport Fever. Please see the instructions page for reasons why this item might not work within Transport Fever.
Current visibility: Hidden
This item will only be visible to you, admins, and anyone marked as a creator.
Current visibility: Friends-only
This item will only be visible in searches to you, your friends, and admins. 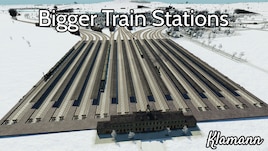 Klamann
Offline
See all 713 collections (some may be hidden)

This item has been added to your Subscriptions. Some games will require you to relaunch them before the item will be downloaded.
Description
This mod adds more options to train stations: more tracks & longer platforms, but also a very short platform and pretty much everything in between has been added ;)

Features
Compatibility
Note: Compatibility issues usually arise, because another mod is trying to do the same thing as this one (i.e. adjusting properties of the vanilla train stations). Having incompatible mods active won't cause crashes and it won't damage your savegames, but this mod may not work as expected.

Random remarks
This mod has been around for a while now and a lot of great train station mods have been released in between, so I won't update this mod anymore (though I will fix bugs if you provide enough information to reproduce them). Please have a look at Flexible Train Stations for even more options to adjust the vanilla train stations and Ultimate Station, to fine-tune every last detail of your stations.
< >
82 Comments