This user has also played as:
Brendon 
Brief Bio: I am a male Chinese/Caucasian person, I like games, maybe a little too much. I play League of Legends, CSGO, TF2, and other shit on steam. More about me on text box

E-Sports Entertainment Association (ESEA)
172,419 Members
"We are not retreating; we are advancing in another direction."

REQUESTS FROM PRIVATE / LVL 0 WILL BE DECLINED AND/OR BLOCKED

Welcome to my profile.
I'm a dude, idk if you know, but I am indeed a dude. I live in the eternal hell that we know as Steam, and I can't fucking get out. I play CSGO. Which i sorely regret, like seriously, where did 4 years of my life go? So, that's that. I play other games for fun as well, preferrably with friends, so I'm usually down if you ask (I might be busy though). If you care about my insane gamer achievements, keep reading. If you really want to, leave a comment about how much of a troglodyte I am.

About Me
If you actually scrolled down and read, I guess you deserve to know a bit more about me 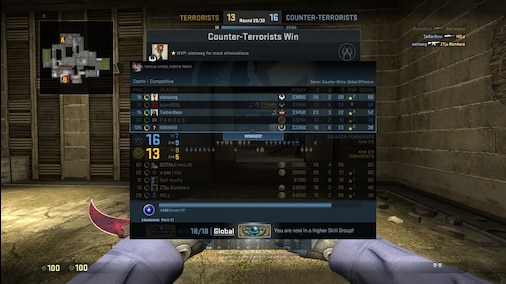 I sold all my cs items, dont trade me.
Favorite Game Black Desert Online
2,668 Hours played
Now that I have accrued a lot of hours on this MMORPG, I finally feel like I can say something substantial about this game. I have gone through the tedium and grind of reaching level 61, I have acquired, for the most part, soft cap gear; and most importantly imo, I have seen this game go through multiple phases and experienced a lot of it.

Let us preface the meat of the review with the easy pros of the MMO:
-NICE FUKN GRAFIX
-NICE FUXKN COMBAT SYSTEM, SKILL.COM (except for the whole gear thing haha), VERY FLUID
-U CAN HAVE BIG TIDDY GIRLS BUT THE GAME STILL ISNT REALLY OVERLY SEXUALIZED
-THE GRIND IS MORE FUN THAN IN OTHER MMOS SINCE COMBAT IS FRIGGN COOLIO
-VERY OPEN WORLD AND SANDBOXISH, QUESTS ALLOW YOU TO EASE UR WAY INTO IT THO (FREE GEAR TO HELP PROGRESSION)

easy cons:
-NEED SOME MEAT ON THE BONES OF UR ♥♥♥♥ TIER COMPUTER
-THERES A REASON KAKAO GAMES IS MEMED AS CASHCOW GAMES
-HITREG IS SOMETIMES QUESTIONABLE, FIX UR SERVERS CASHCOW. dum company grrr
-A BIT DAUNTING (like jeez scoobs what do i do after lvl 56???????), JUST GET INTO A GUILD AND ASK MANY QUESTIONS
-YOU CAN PROGRESS JUST FINE WITHOUT CASHCOWING IT UP, BUT YOU WILL INCUR AT LEAST 60$ IF YOU DON'T WANT TO BLOW UR BRAINS OUT CAUSE THE GRIND SUCKS 2 MUCH. (value packs, artisans(???maybe), pets, maids(???maybe).

PT I (Levelling and Early Progression)
I was here since around the steam launch of this game, and starting from that era, the tedium of getting levels was kind of hellish for me. I swore to myself after level 58 that I would stop leveling actively and focus on other sh*t. I am not really the grinding type per se, but I managed. It got maddeningly slow back then, and I felt that progression basically stopped, while I still hadn't achieved my main goal... PVP. If I allowed myself to dedicate much more of my free time to it, I might have gotten there in a few months, but I wouldn't enjoy that, as I'd assume most of you reading this rn wouldn't as well (props to u if you are fine with it tho- you masochistic ♥♥♥♥). The good thing is, getting through the barrier of achieving these higher levels allows for any new characters, new progression, etc. to be made much quicker. The only thing you can't transfer is those weapons (so get accessories, they are important i promise).

PT II (Enhancing and Gear):
This is the part where I go from safely saying, "it's just preference, if you like the grind", to, "yeah, it's pretty awful". Hold your horses though, because this gear progression past +15 is not as bad as it's made out to be. Or at the very least, it's getting much easier to get competitive levels of gear nowadays(AP/DP). And that's what matters. You probably know the deal, you have fail stacks, and if you fail at duo(II) or above, you are going down a level. That sucks. But, that is why you need to be calm and collected with enhancing, make sure you have the resources to take a hit from losing a level. Don't blast away the essential accessories you have, instead, try to have backups, that kind of stuff. IMO, slow and steady wins the race, and gets you the ♥♥♥♥ to soft cap fast enough. The RNGcarried are the lucky few who got impatient, what you don't see are the impatient ones who failed and ragequitted. Don't be that guy, cause you'll quit and be another one who puts down a negative review. By the way, this review on gear and leveling is reminiscent because this is kinda how it was back then, how it is now, it's significantly different. So this leads into...

PT III (Then Vs Now):
BDO has made (imo) major reforms that make it much easier to progress gear. Also, remember how I said it was hellish getting to lvl 58? They raised soft cap for that, further showing how its getting easier to catch up. So when it used to be hard to get lvl 60, now its hard to get lvl 62. That's important because your ability to get silver will be better than the old ♥♥♥♥s that progressed much slower and had to grind harder.

For gear, I would say that no matter what, back then and even now, TRI (III) gear and DUO(II) accessories was not too bad to get. But, with caphras stones and cron stones, a safe, nice and steady progression of gear is allowed past TRI. Accessories are still kind of a ♥♥♥♥♥, but the chances are in your favor when upgrading DUO. And the thing that I am mentioning is soft cap. Let me still say though, good f---in luck if you are trying to get past soft cap, the world of PEN attempts await. I promise you that if you look at guides, grind the right spots, and enhance slow and steady, you will get soft cap faster than anyone wished they could have a year ago.

PT IV (Cashcow):
Like I said, for quality of life stuffs, ur gonna be spending $60. If you aren't okay with that, but still wanna play, I hope you are a masochist that likes c**k and ball torture or somethin because its gonna suck for u otherwise. Past that though, you may want to end up buying stuff like outfits(not needed), costumes for life skills(debatably needed), artisans(just man up and farm more memory fragments). And if ur a whale, u can go all out and extract outfits, sell outfits, etc so you can get free enhances. You get to soft cap so much faster if you spend a god awful amount of money. Don't do that, I say, because even without that option, you can progress with the rest of the not that rich people(or morally upstanding people), and still be fine. Gear is so important in this game, and that is why I will say that my only huge con in this game is the fact that the easy path is allowed for people who want to spend $1000.

At the end of the day, you can reach the holy grail of soft cap PVP just fine imo, and that is the most important part. Kakao has been keeping it up with content, and pushing us to spend hella cash, just don't do that too much, and I can recommend the game to you.

My final question I shall pose to you:
Are you "hardcore" or dedicated?

Yes> play the dam game
No> eh, decide for yourself
Leave a comment
Favorite Guide 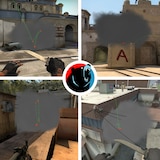 Counter-Strike: Global Offensive
I gathered everything you need in this one guide. All smokes and flashes and basic molotovs for all the competitive maps.
Workshop Showcase 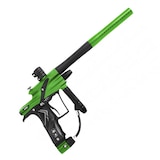 Silent is Golden Aug 14, 2018 @ 7:02pm
Naomi: We need to give the ship a new name to complete the override.
Alex: Screamin' firehawk
Holden: [Derisive] Yeah, let's advertise we're a gunship...
Alex: Flyin' Alamo
Holden: No!
Naomi: Give me something, please...
Holden: Rocinante!
Alex: Huh?
Holden: It's spanish for...
Amos: ...workhorse - I like it. I know a lady named Rocinante, she was good to me.
Naomi: Whatever - punch it...