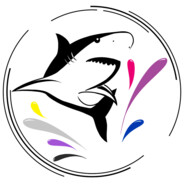 I stream occasionally: https://www.twitch.tv/trueblackshark/
I have a Discord server: https://discord.gg/3gwFMTY
You can also add me on Discord directly: badBlackShark#6987

Vectronom
155 Hours played
August 2020 edit: By now the game has received an update to include a level editor, giving the game a whole lot more post-campaign content. If you were on the edge about this game before, now it is definitely worth your money!

Vectronom's simplistic style might lead you to think that this game is poorly made, or overly simple, but you'd be wrong. While the game omits pretty much all of the wonders of modern game graphics, it's exactly as detailed as it needs to be, focussing completely on gameplay and, obviously, music.

First and foremost, the gameplay. At the time of this review the game has 10 batches, each with 3 levels, each of those with 3 stages, plus one final level that also features 3 stages. That in total gives you 31 levels or 93 stages, all beautifully handcrafted, to play. All the levels follow the same general idea: The 3 stages of a level (usually) get increasingly harder and / or more complex. In each stage the level follows a certain pattern, synced with the music, that makes the ground move and obstacles appear / disappear. Like the level, with each new stage the level's music also becomes gradually more intense.
While this game doesn't have very many different gameplay elements - blocks to move on, spikes and bouncy pads - it uses all of these in many different, creative ways that make all the levels look and feel different, despite truly new mechanics only being introduced rarely.

Let's get to the music. The music in this game is simply fantastic. It all follows a fairly electronic style, but that definitely fits the look and feel of the game. Each and every song was done in-house by Ludopium, which makes it all the more impressive. Make no mistake though, the electronic genre doesn't mean that the game can only do a steady 4/4! Apart from that and the also very common 3/4 the game also features songs in more odd time signatures like 7/8 or 9/8, which will be a great challenge for the not so rhythmically inclined.

That leads us perfectly into the difficulty part of this game. I play the drums in my free time and have played a solid amount of platformers for a solid amount of time before picking up this game, and from watching other people I think that I give the game less credit for its difficulty than it deserves. While I personally found the difficulty curve to be a little too flat, the vast majority of people should enjoy the more gentle introduction of complex patterns. Especially people that can't play an instrument probably disagree with me, but I personally found especially some of the later levels to be a little too easy, especially after beating them once. Maybe this is just my preference for generally difficult games though, and since I've seen many people struggle with this game for a while I'm certain that a lot of people will find this game to be just the right mix of challenging and rewarding.
To give you a sense of time: I think a first playthrough can be completed in ~2h, ignoring all the optional achievements (first try, all pickups and perfect accuracy) you can earn on each level. If you're good at platformers and have a decent sense of rhythm a 100% completing can probably be achieved in under 10h as well. If platformers are not your forte you can probably double those times though.

Wrapping this up, I think even though the game is a tiny bit on the short side, it is still well worth its price, and if it's only for the amazing soundtrack you'll get to enjoy. The developers have also - again at the time of this review - announced that they're not done with the game yet and that there will be some additional content in the future. If you like speedrunning, either as a runner or usually just watching them, this also have great replayability. If you've never run a game before and would like to get into it, this is one of the perfect games to start as it won't require 100s of hours of play to achieve high level times.
If I had to give this game a rating I'd probably give it a very close 9/10. Purely from a gameplay perspective I'd rate 8, due to my subjective view of the game's difficulty and length, but taking the replayability into account it gives me through speedrunning, but I'm willing to award an extra point for the outstanding soundtrack.

For the price of 9.99€ this game is well worth it, and you should pick it up if you like platformers, music, or both.
Leave a comment
Rarest Achievement Showcase

Bourne Dec 23, 2016 @ 1:44am
May the yuletide spirit fill your heart and home with an abundance of mercy, contentment, laughter and harmony. May the peace and love of the Christmas season wrap you boundless joy during the season and in the New Year.