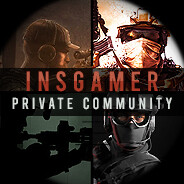 ⊛ ABOUT
insGamer Private Community is a close-knit group of like-minded gamer's who enjoy playing tactical, first-person shooters. Originally focused and centered around the Insurgency series, we have since expanded into other games of the same genre.

By no means are we a mil-sim community; this group is most importantly about communication, team work, being able to take a joke and have respect for one another. If you do desire to join, please have all the above attributes and Discord (with working mic!) so we can actually get to know you.

⊙ HOW TO JOIN
Everything you need to know about the insGamer private group and how to join can be found here[www.insgamer.com]

Joining steps can be found towards the bottom of the page, in the blue section.

☛ insGamer | Donate to the Cause[www.insgamer.com]
VIEW ALL
POPULAR DISCUSSIONS
VIEW ALL (6)
RECENT ANNOUNCEMENTS
Private Server #1 - A test bed for future new features!
February 10, 2018 - [insG]DeltaMike | 0 Comments
UPDATE - FUSED TNT CHARGES & ALL PARTICLE EFFECTS
I have gone ahead and since the original posting of this announcement pushed an update to the server and the theater file. Along with the TNT charges (engineer class), this also includes all the particle effects I can see using for quite some time. So you will not be expected to have to reconnect to fix the issue more than once after the 1st/original join of the server is made and you have downloaded the files.

Hey guys and girls! This is just a notice on some changes to server #1 for those who actually read these things.

IF YOU DO NOT LIKE READING - PLEASE AT LEAST READ THE "NOTICE" IN THE SECTION ABOUT CUSTOM PARTICLE EFFECTS, THANK YOU.

Server #1 has been on the decline of use, as we mainly play on #3 or #4, which there is nothing wrong with that. I'm always trying to offer a vast array of features and some people will take to other stuff, as others might find something else more interesting. Therefore, I have transitioned #1 to be my personal proving ground for the future features of the insGamer private server group.

• REMOVAL OF LIGHT MACHINE GUNS - I have removed the LMGs at the moment to make room for the testing of new weapons. It also seemed easier just to remove a whole class of weapons, rather than nitpicking which to go and which to keep. Also by removing this class of weapon, I feel it should make the situation in the game a little bit more "intense" - from the aspect you can't just spray down a herd of insurgents with 200 rounds and call it a day.

! NOTICE !
The FIRST AND ONLY time you join insGamer Tactical #1 you will have to either rejoin (easily done by typing "retry" in console) OR wait for a map change. If you do not, because the particles were not precached for the current map, everytime any one uses a weapon/explosive with the custom particles, it will emit red X's. The files will remain within your Insurgency game directory, even after you close the game. So, like stated before, this is a one time thing (or whenever I push new particles, I'll try to consolidate it so it's not frequently)

What will custom particles allow? Well to sum it up, basically particles are what you see everytime you see a muzzle blast or blow something up. Pretty much sounds like what it is. Already on server #1 I have gone ahead and added M18 smoke with orange smoke for marking. This smoke is orange and billows up higher and not as wide as your standard M18 smoke, making it good for marking down players, objectives, points of interest (like resupply points) and more.. I hope to implement more stuff in the future like the timed TNT charge from Day of Infamy, which has a fuse and weren't able to use up until now. Also, napalm has the ability to look a lot more realistic too now, but I want to see how this goes first before I do anything dramatic.

I hope you guys continue to work with me in both understanding what it takes to get some of this stuff to work correctly and also by providing me feedback. If you want to provide feedback and ideas, feel free to contact me directly.

As of yesterday, if you cannot tell already, I have started making changes to the private servers. I am going to explain why I did this, what each server offers in terms of gameplay, settings and rules.

First we will cover why I did this. I'm going to go ahead and state I love Insurgency just as much as anyone else here, but quite honestly, how people have been playing the game lately has been chaotic and quite honestly has ruined the experience for a number of people, including myself. With rampant use of explosives, relying on medics for every round of a game and just the overall no-teamwork, gung-ho attitude of a number of players.

Now yes, I could just start kicking people from the group, that's one fix obviously, but I'm not that type of person. I formed this community, insGamer originally for the 35 Angry Bots servers, they are my pride and joy and I still maintain them to this day because I feel everyone should have the opportunity to play - in a setting that they best feel comfortable. I have brought that attitude to the private section of the servers I maintain and feel like no one should be penalized for so. With that said, let's go to point.

There is three private servers. Two of which are "tactical servers", these are labeled respectively insGamer.com - Tactical #1 & #2. These are the servers that over the last two days have seen the most changes. These include the implementation of squad classes, each class is assigned a special set of explosives that they can use. I will be setting up a webpage outlining which class gets what in the near future in terms of explosives, so stay tuned for that. Also each of the squads will now only have one medic, thus cutting down the dependency on the use of medics. For the settings part of these servers, there will be no explosive stacking plugin and no kill confirmed messages (might bring this back.) In terms of player counts and bots, the only difference between #1 and #2 is that the first server is 6 versus 30 and the second is 8 versus 30. For rules, there will be the obvious no rushing objectives enforced, but with one medic now, I cannot be any more clearer about how there will be NO rushing by the MEDIC to the frontlines. You are a medic, your job is to get your teammates up, if I see this personally you will be warned, then booted, then removed from the Steam group. If you are not up to the task of being a medic, simply ask someone else nicely to take the role over.

For the third and last server, which I have named insGamer.com - The Lounge, this is more relaxed (less teamwork oriented) environment with the theater remaining the way you guys recall it before I altered it. No explosive restrictions, three medics, 8 players versus 30 enemies. Kill confirmed and explosive stacking plugins remain in use. There is still the obvious rule in place of no rushing objectives and capping or blowing them before everyone else is ready.

[SK/UA] Divine Lotus Aug 1, 2019 @ 1:01am
It's been a while since I played a game with you guys in the private server. I hope things have been well. Otherwise I 'm unable to be online as often as I used to, but just know that I have this community in mind. Great memories and cooperation.