Ready or Not is an intense, tactical, first-person shooter that depicts a modern-day world in which SWAT police units are called to defuse hostile and confronting situations.
$39.99
Visit the Store Page
Early Access Game
Get instant access and start playing; get involved with this game as it develops. Learn more.
Most popular community and official content for the past week.  (?)
Community Content Exhibit Vol. 1
May 20
Welcome to the first in our series of monthly newsletters, dedicated entirely to community creations and contributions to Ready or Not! This month, we’re focusing on popular, well made, and unique mods to take your gameplay to the next level. Let us know if you’ve already experienced one of these in the comments!

Community Spotlight – Mods of the Month
1.) In-Game Menu[www.nexusmods.com] by TheRareKiwi
For many players this will be one of the first mods they download, and often the first they are recommended. The simply named ‘In-game menu’ offers users more granular control over their lobbies in both single and multiplayer. The mods feature set includes a proto-server browser, user limit changes, a map selector, and even a simple mod management and identification interface, to see what mods you have loaded at any given time. 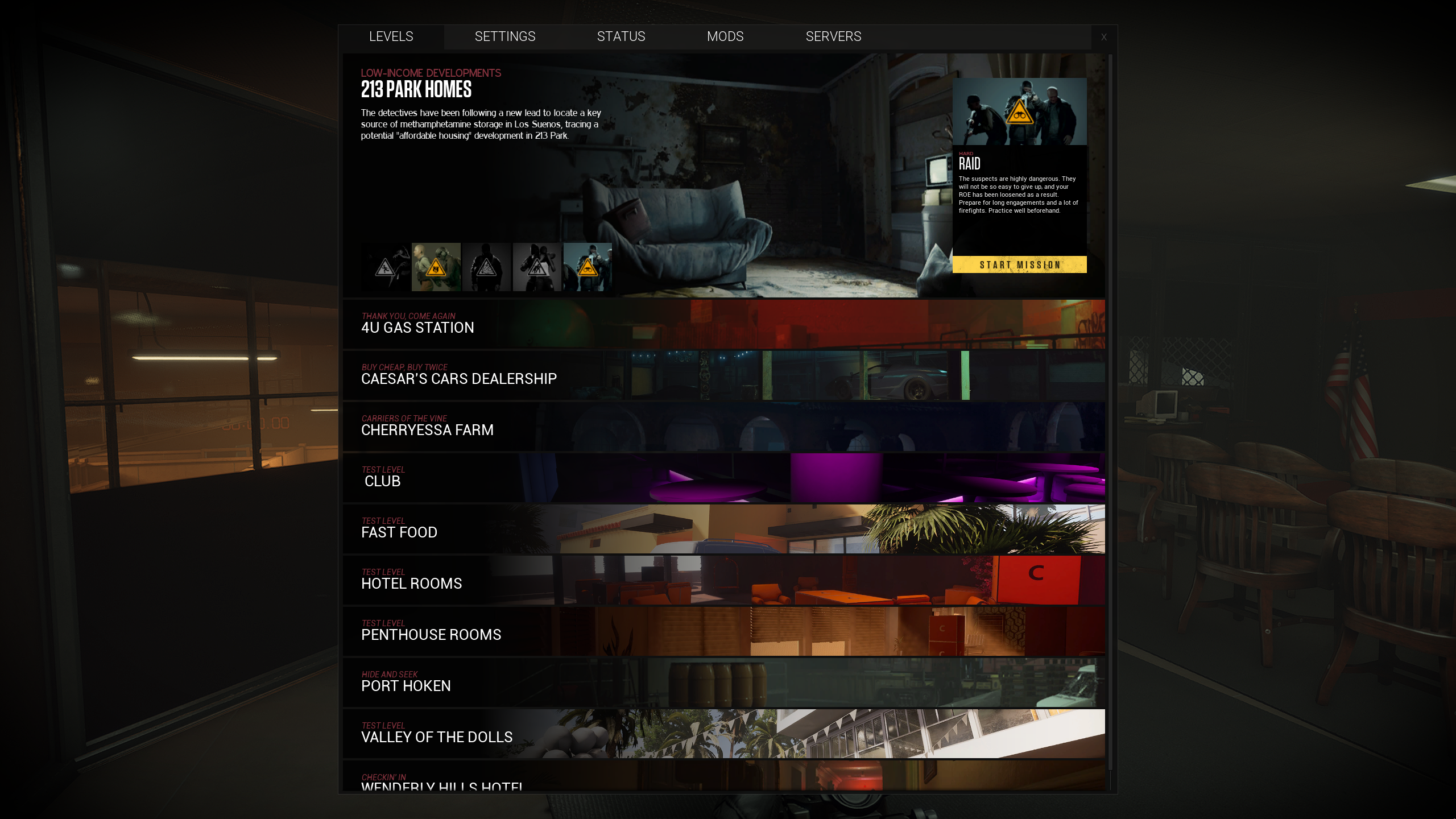 2.) The Fairfax Residence Remake[www.nexusmods.com] by bmatthew9342
The Fairfax Residence is a map that features many veterans of the Tactical Police Action genre. It’s a faithful remake of the old SWAT 4 map, and faithfully maintains both game’s high level of environmental storytelling. Most present is the slow feeling of dread from the compact map, the well decorated environment, and its sparse use of NPCs. 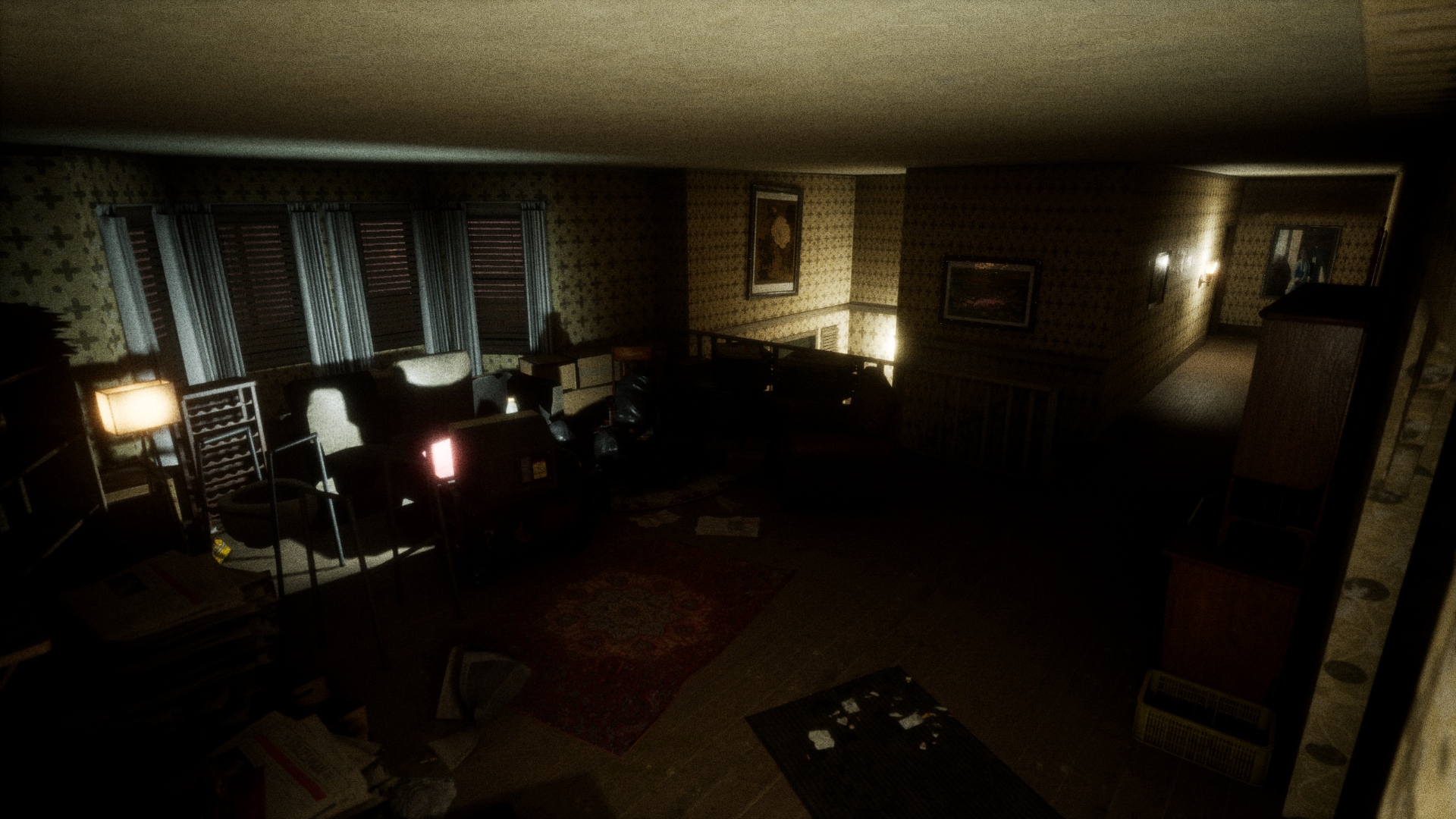 3.) Old Wenderly Psych Hospital[www.nexusmods.com] by WasabiParty
Old Wenderly’s claustrophobic corridors, and high density of both civilians and suspects, lend themselves very well to the short, furious firefights that test all players' target acquisition and identification skills. The only downside to the map is the lack of decoration, but given the map's size combined with how hectic the action tends to be, it’s very easy to overlook its missing flair. 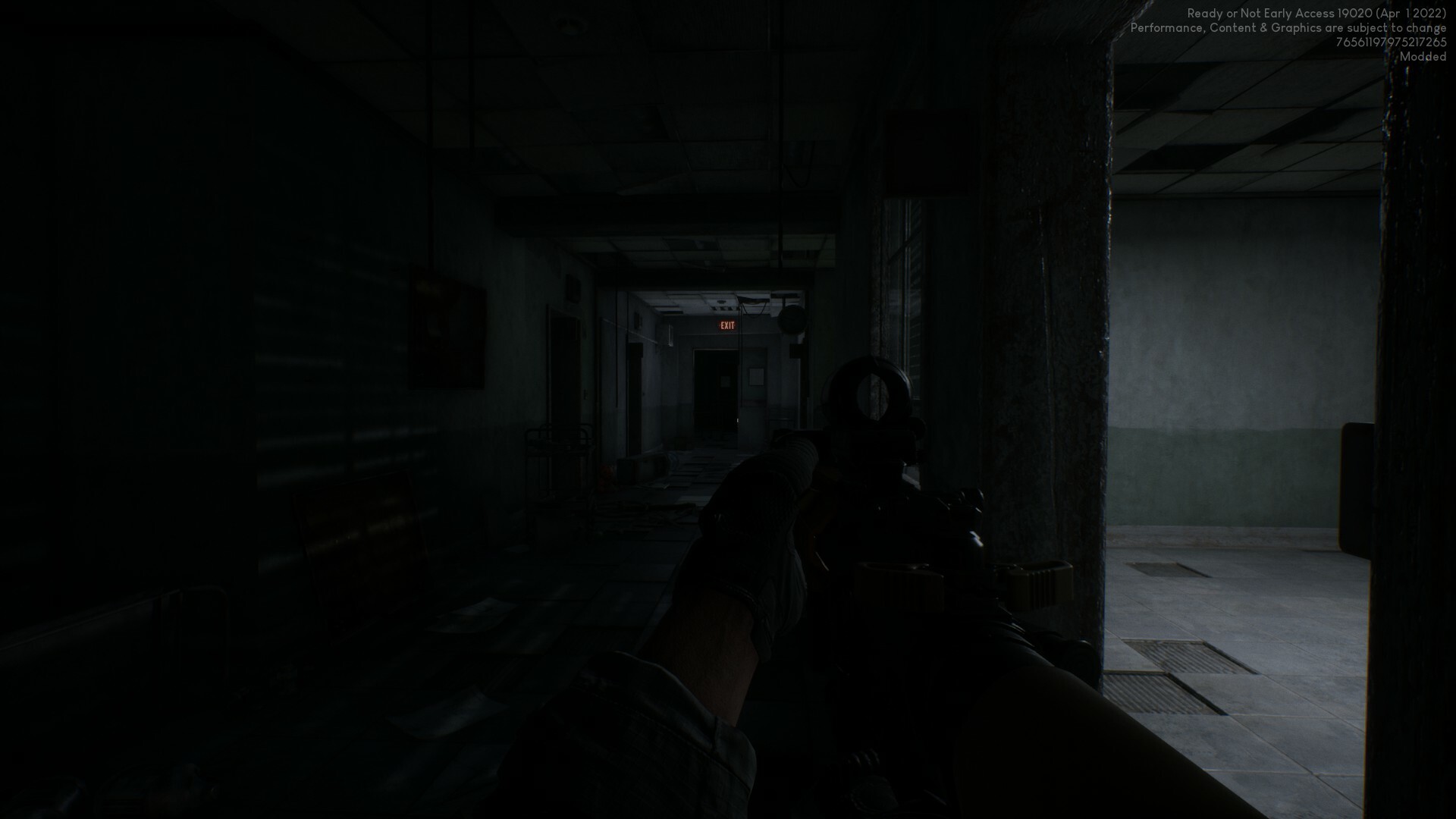 4.) ODST RONMOD[www.nexusmods.com] by Sierra107
I really think the name of this mod speaks for itself! Though given the in-universe talents of the ODSTs and the incongruity of placing them in a reasonably modern space, it doesn’t mean that Absiv didn’t hit it out of the park with a modern version of the ODST battle suit and aesthetic. The cherry on top of this mod, is that HoltDT also contributes voices that sound like they’ve been passed between helmet comms, as well as two weapons provided by Unselles! The headliner is the venerable M90 pump shotgun, whose sheer imposing presence makes it an absolute joy to use. The other is the MK50 Sidekick from Halo Infinite, whose replacement of the USP is quite a fitting choice.

All round it’s a wonderful package, with more tweaks and firearms on the way!

Addendum
I have miscredited several creators in the above post, this has been fixed:

Both Unselles and HoltDT have authorised ODSTRoNMOD to utilise two mods separately uploaded on Nexusmods - these mods are;
*.357 Bonanza, M90, and MK50 by Unselles
*Trauma Team style voices for SWAT by HoltDT
*ODST Armor designed by https://www.artstation.com/abisv 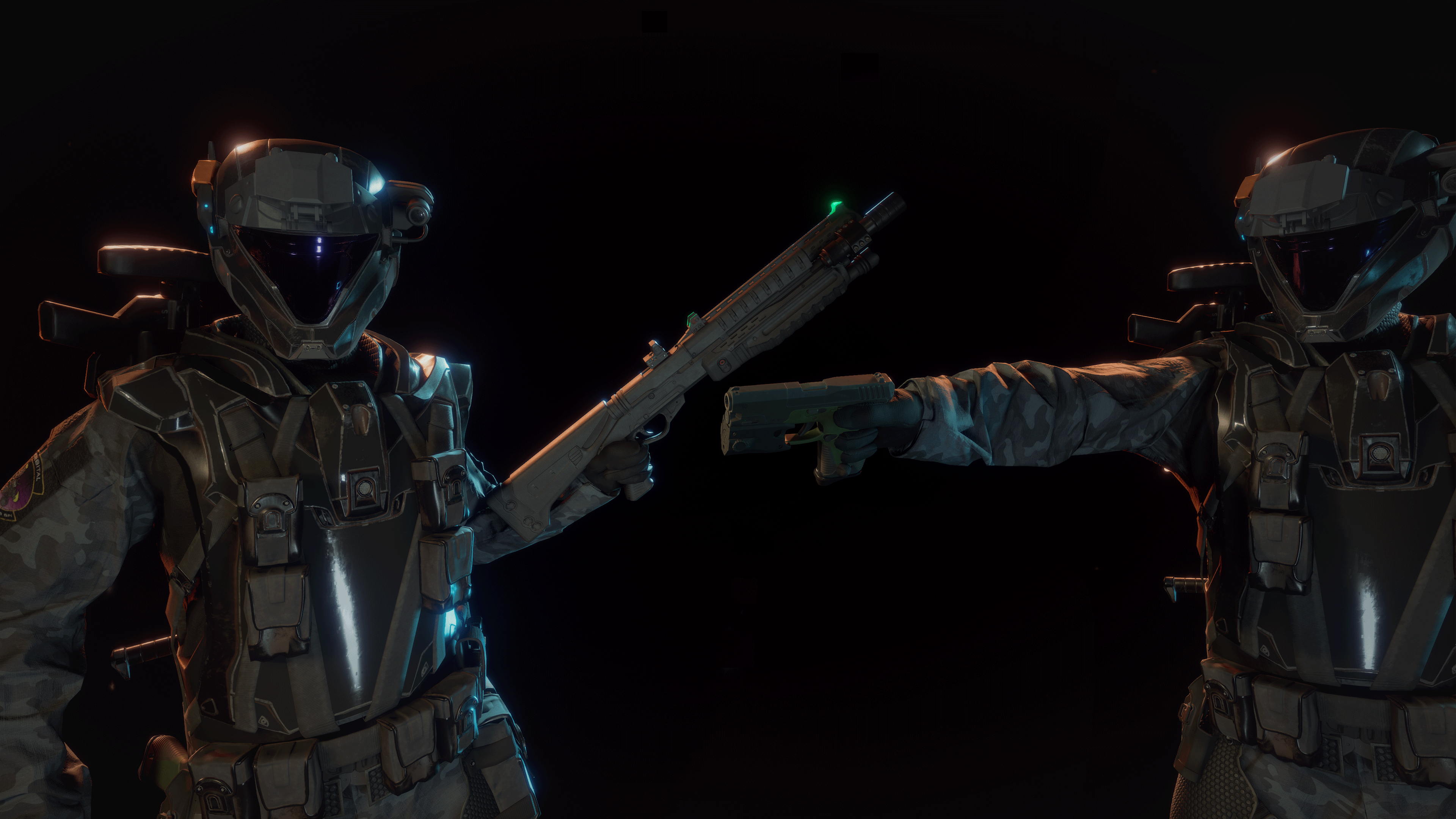 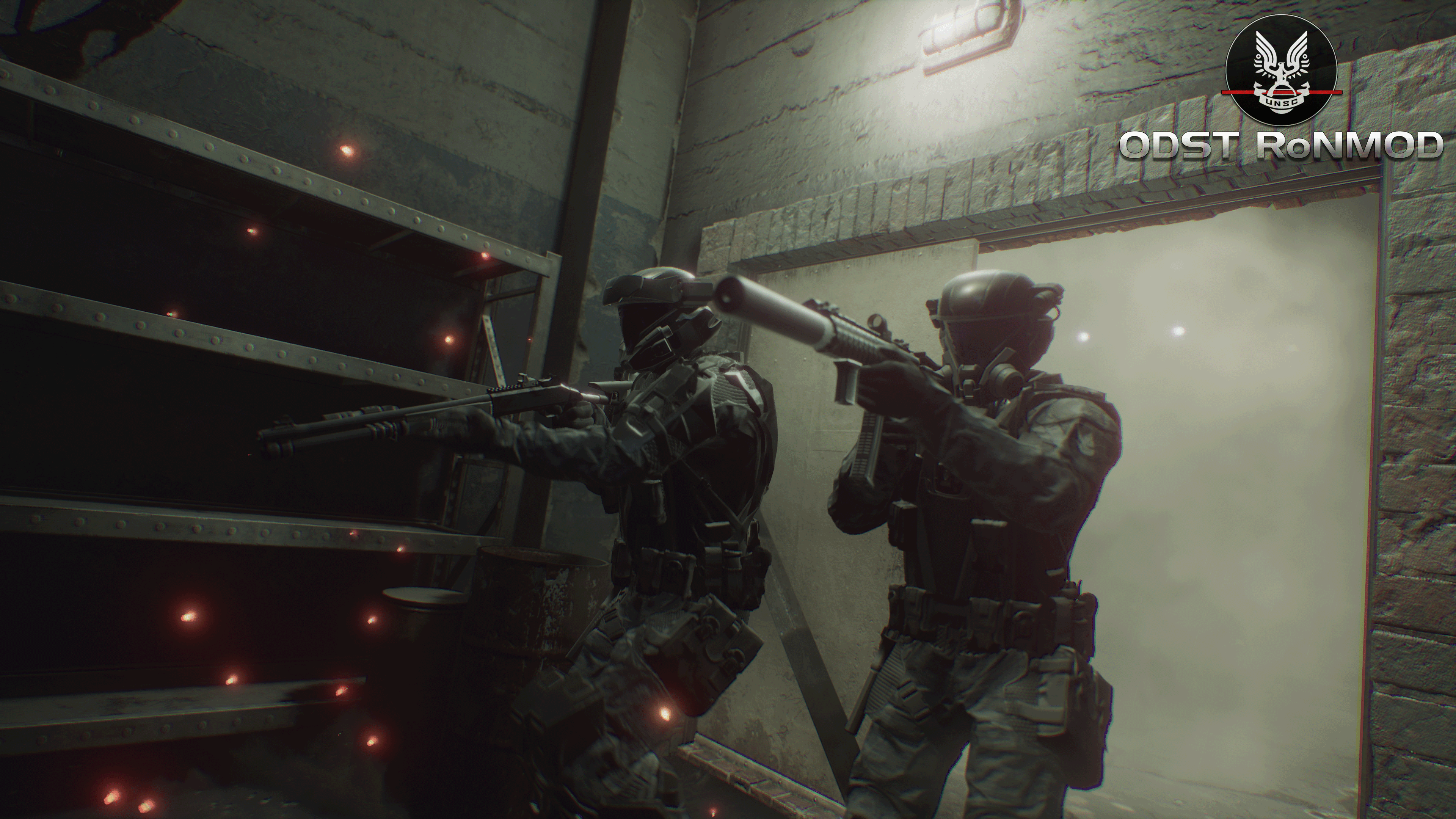 Closing
Going forwards, we can’t WAIT to see what else the community brings to the table as we update the game and to give modders more functionality to play with and improve their own works.

Outside of our highlight posts you can find more wonderful content here:
https://discord.gg/TjyfbXTU28 or https://www.nexusmods.com/readyornot/

Ready or Not
1,415
97
Setting VFX problem
I have a problem with VFX if i put it epic my fps drops to 48 sometimes but if i put it high i can get solid 60, but the problem is that in high there is no muzzle flash. Any fix?
2

Dean Winchester
56 minutes ago
General Discussion
May Update Addendum
May 17
To the Ready or Not Community,

Our developers have been hard at work on putting together our largest content update yet, including new levels, characters, weapons, and a complete cover system for civilians and suspects to utilize. The extra time allotted to our team to work on this update has allowed us to perform necessary bug hunting, problem solving, and mechanical integration.

At this point we now have a firm grasp on how much work is left ahead of us to get the update in a playable and test-ready state. Unfortunately, we'll need just a little bit more time to ensure we can adequately prepare the large amount of new content and systems being added to the game.

Our biggest content update yet will be available to all Ready or Not players in the first week of June.

We know that we've already asked for you to wait for us once, and we know that this delay will come as frustrating news for our community. These extra few days will be crucial in making the update consistently playable and ready to experience with your friends without forcing our dev team into a crunch period that is all too common in the industry.

Going forward, we will continue to communicate any such development news so that we are maintaining openness with our player base. We thank you for your patience, for your support, and for your passion that pushes us to make the game better every day.

We're so excited to share everything that we've been working on with you, and we'll see you in the first week of June! 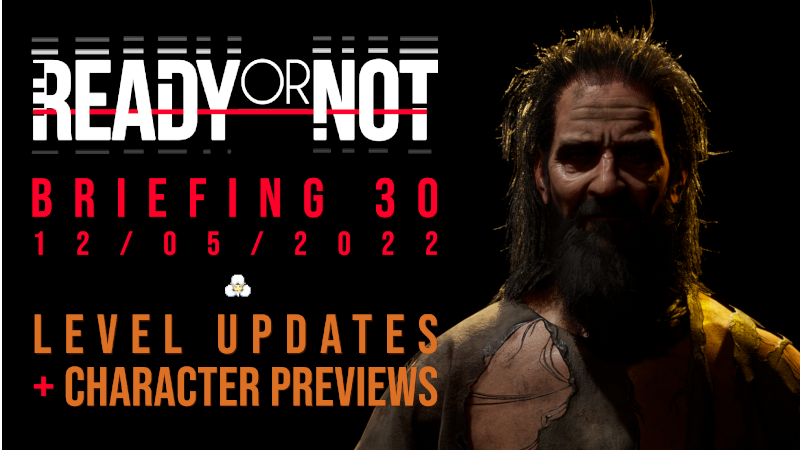 Welcome to the 30th edition of our biweekly newsletter! In this week's issue we're going to be taking a look at some work-in-progress shots of Club and Valley as well as a(quite scary) suspect you can expect to see on Meth in the near future!

Club and Valley Come to Life
With each passing week our level design team continue to add details and improvements to our existing lists of maps, and we're excited to show off some of their fine work. The potential for environmental storytelling in Ready or Not is something that excites us, and that means adding the little details that stand out whether it's your first play through or your hundredth. 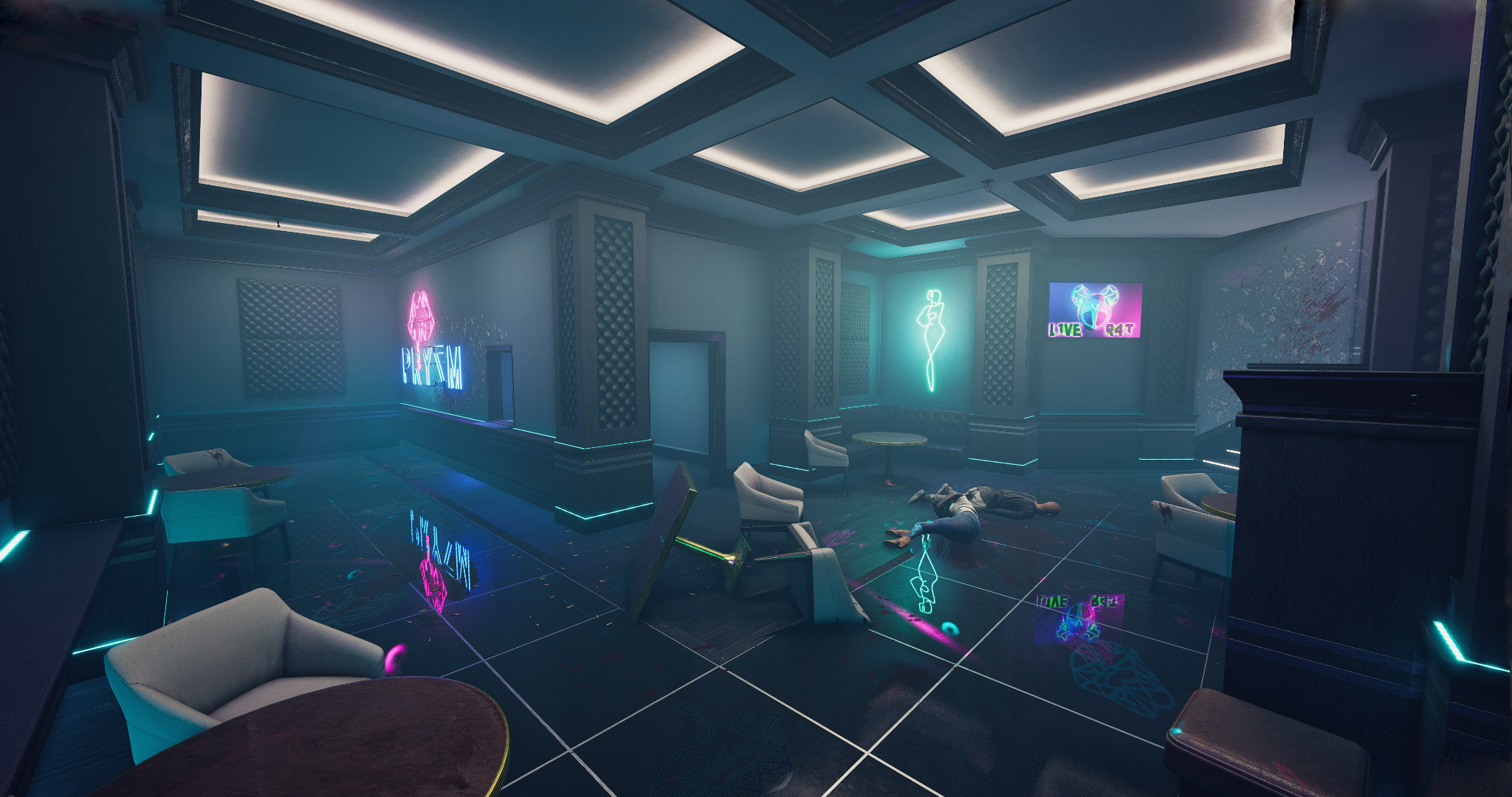 A cascade of violence in the Club. Take control in the Aftermath. 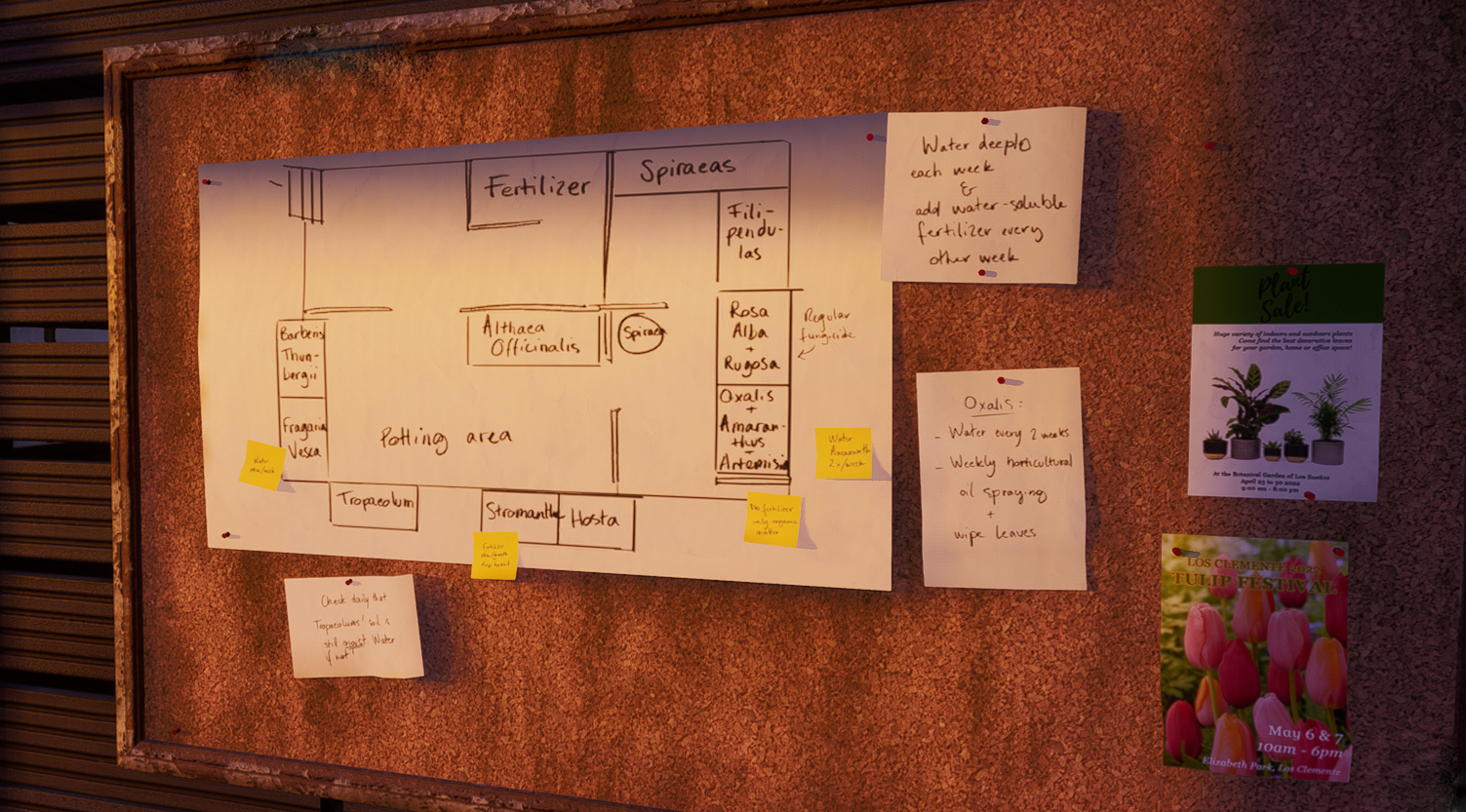 It's important to keep the flowers tended to 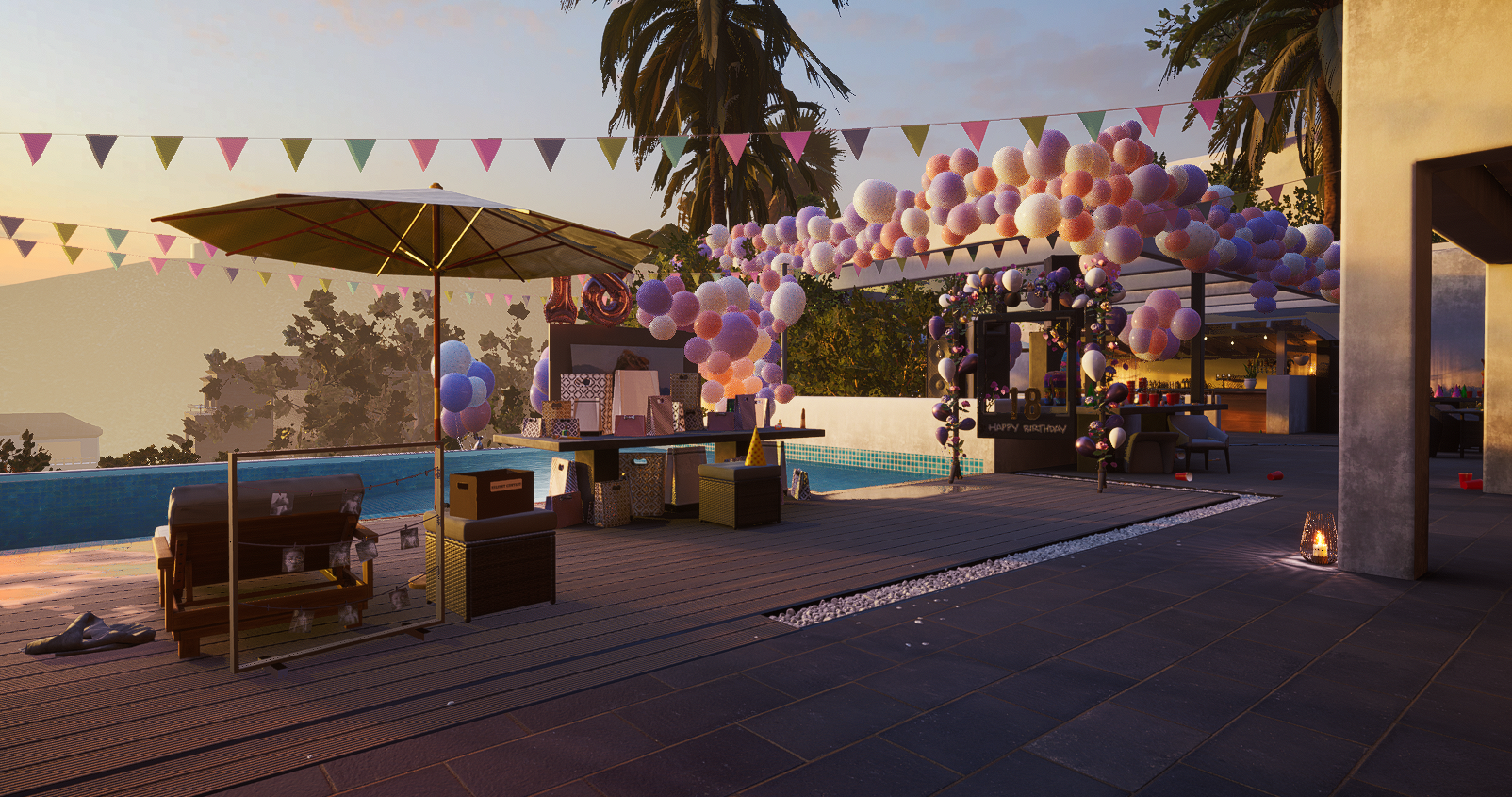 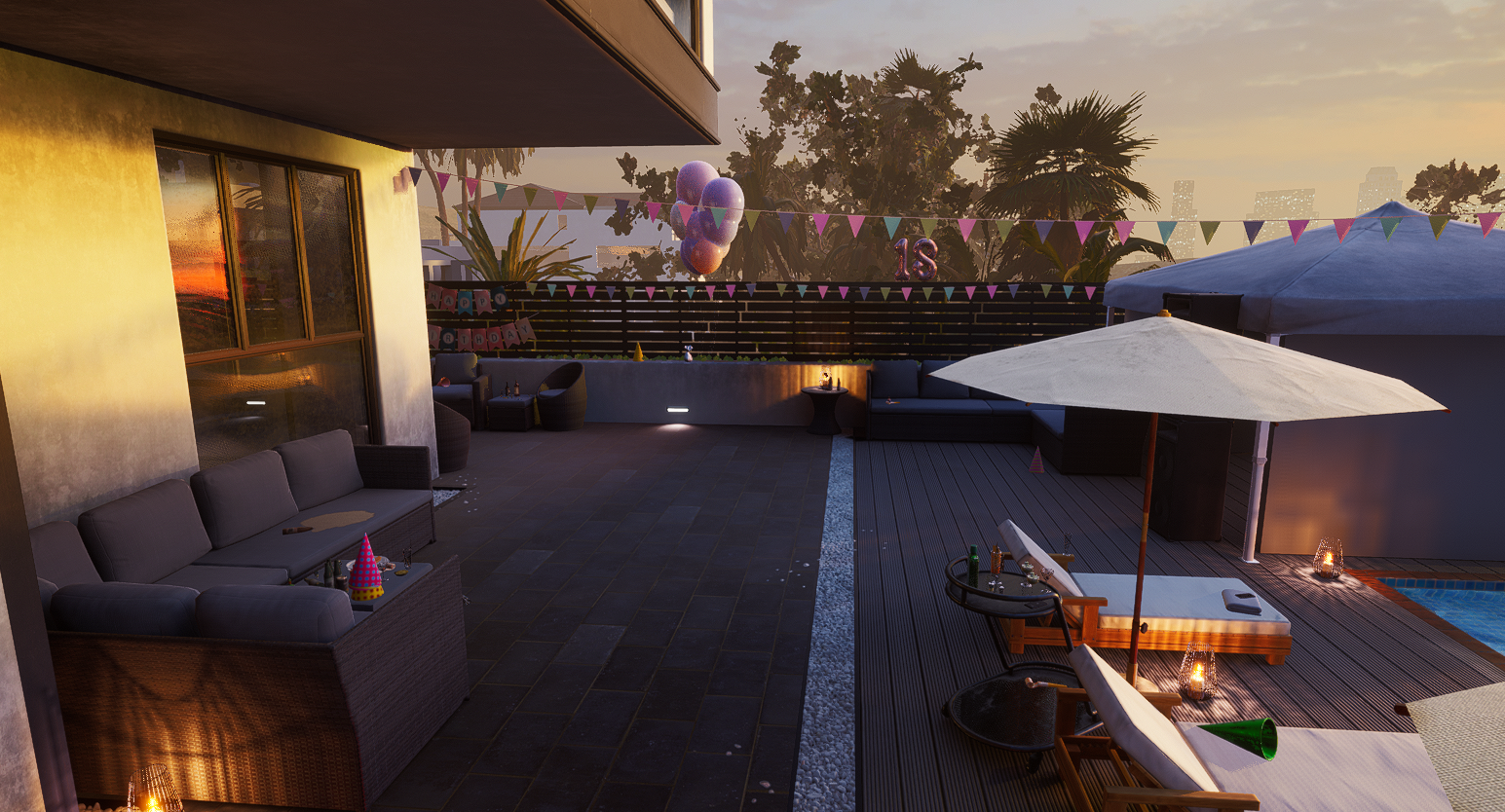 A truly luxurious party. Time to crash it.

Preview of New Meth Suspects
In addition to a myriad of improvements and variations to existing character models, our team has been putting together an entirely new and unique cast of characters for Meth, aka 'Twisted Nerve'. While we're excited for players to run into all of these variants, there's one character in particular we'll be focusing on today. 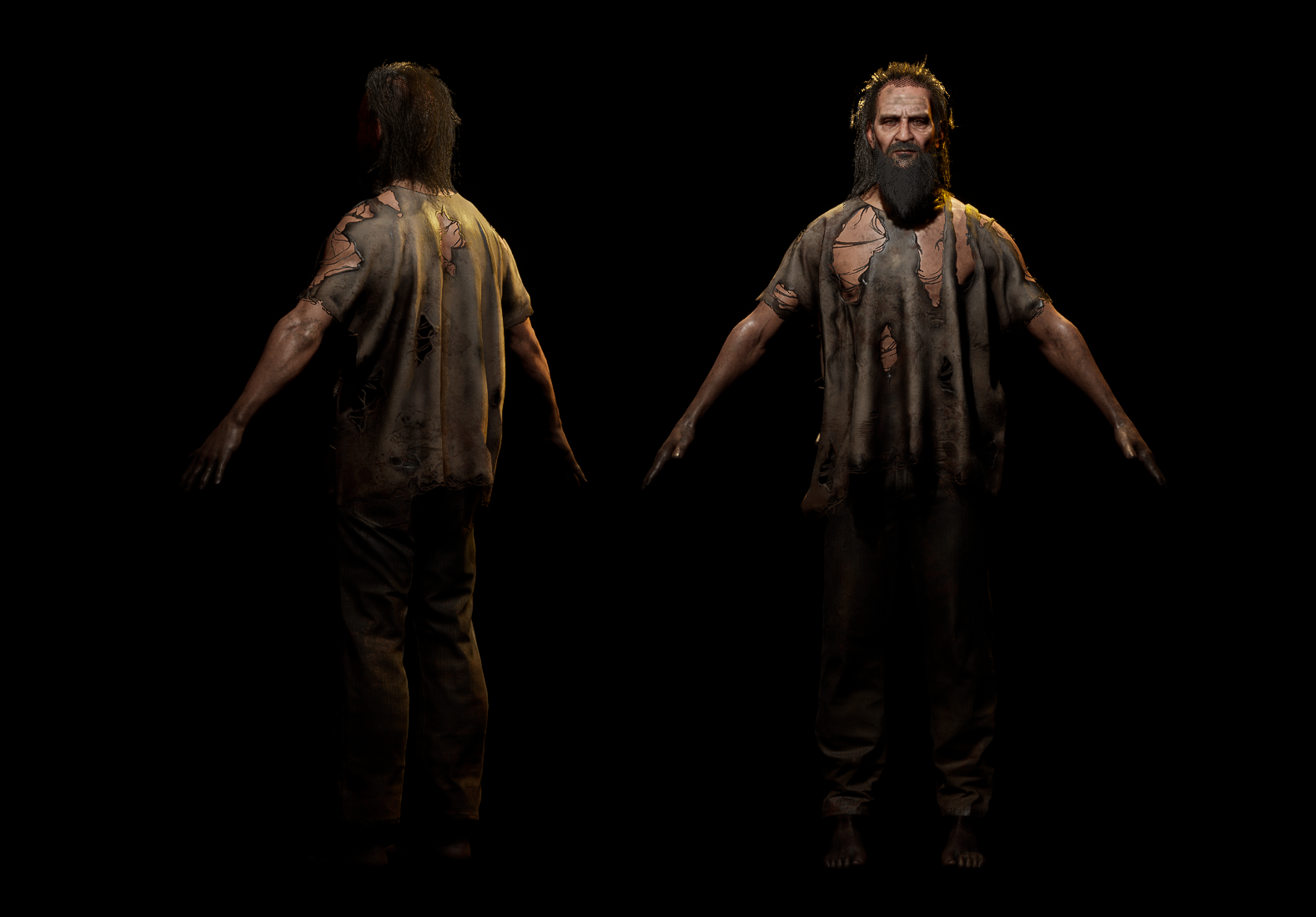 One of 123 Park Home's residents. His cloths have seen better days, and so has he. 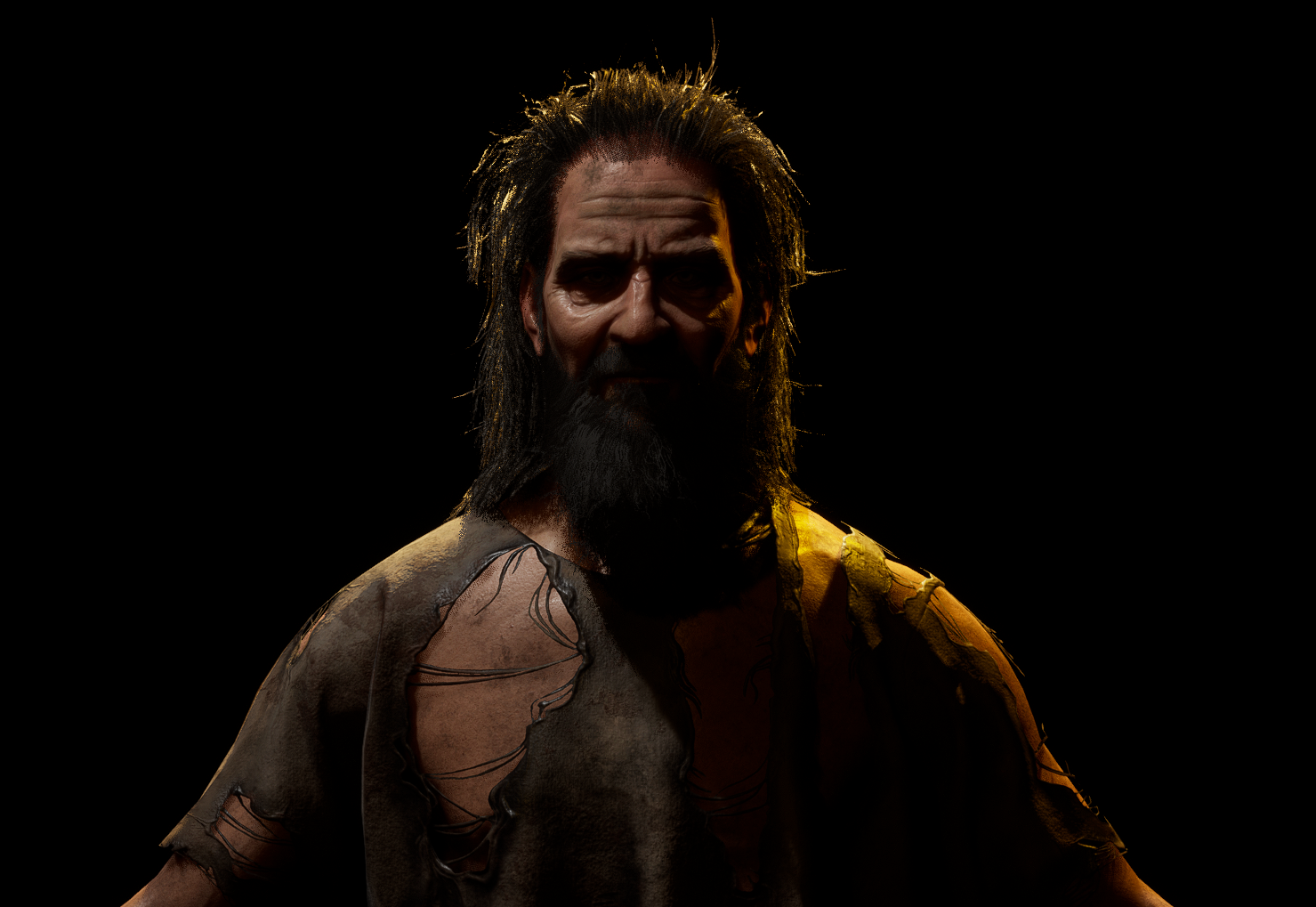 I don't like the way he's lookin' at me, Sarge.

Between the gentleman above and the rest of the new suspect and civilian models coming to Meth, players will encounter a dozen new faces in their journey to bring order to chaos.

Conclusion
As with every aspect of Ready or Not, we're focused on creating an immersive environment that is conducive to tense and fun game play. This means interweaving elements of the game's story with its characters and the world, and we can't wait for you to experience it.

This concludes our 30th biweekly briefing, focusing on a few level previews and a new character model for Meth. Please tune in next time for even more development news, and keep an eye out on our social media!

If you'd like to help us test new content on the Supporter exclusive experimental branch, provide us with your game feedback, and keep up with all the activity and play test events occurring within the Ready or Not Alpha, you can become a Supporter at http://www.voidinteractive.net or at our Steam store page.

Keep your feet on the ground.
Community Management Team

Ready or Not
2,295
144
"Legacy" Map Versions
Has there been any talk of seeing the old versions of maps resurface? Wenderly Hills especially i quite liked the old design of, and i would love to see the original versions of Hotel and Meth House preserved without needing to get them modded back in. They were great introductory maps for new players especially. I've come across a couple newbies this week and wished i could run those maps with them, because as of now the most "simple" map is the gas station, and honestly that one just isn't nearly as fun...
2

How to install mods for Ready or Not
43 ratings 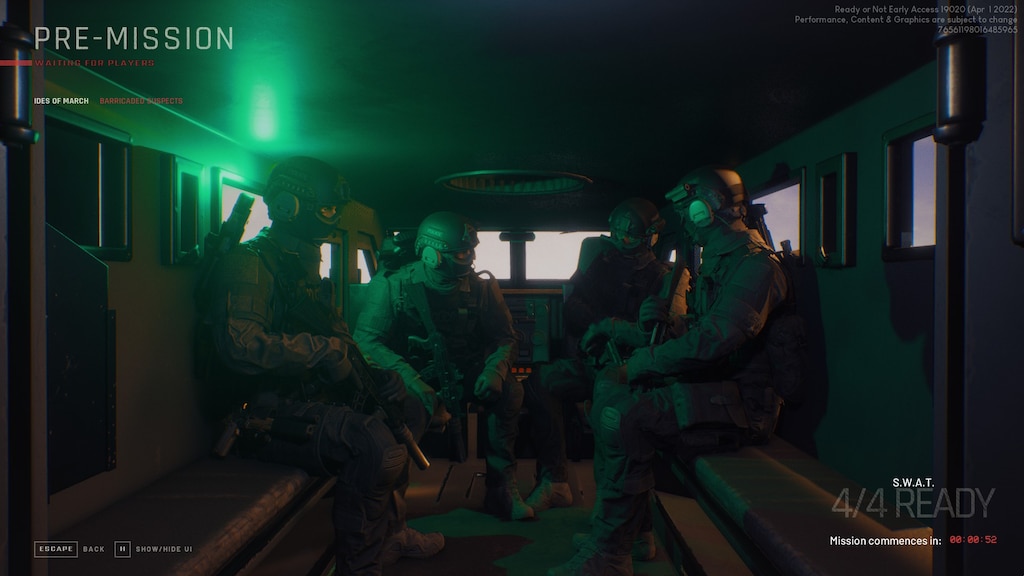 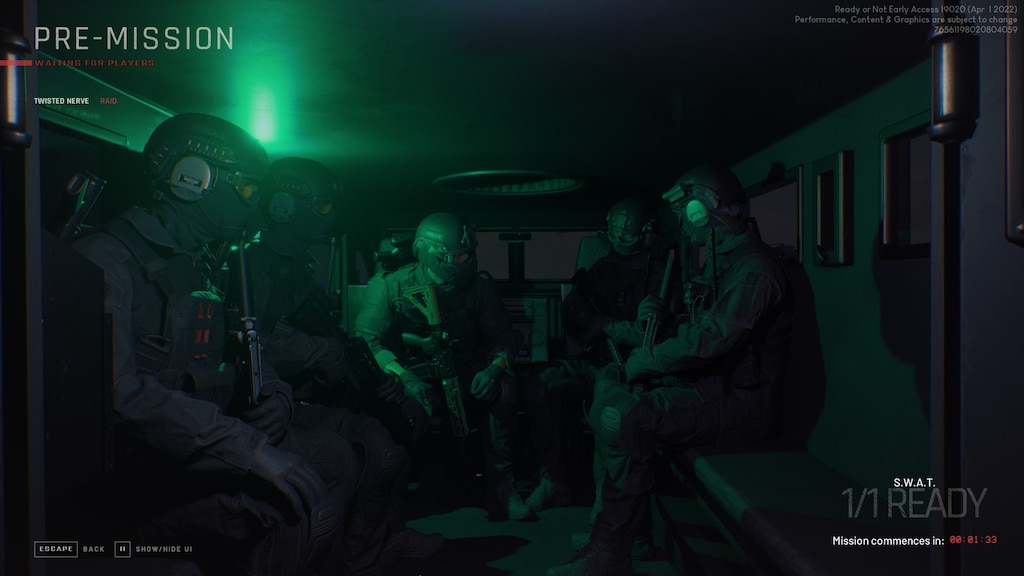 Not Recommended
42.0 hrs on record
Early Access Review
The game is OK, but has issues in game design and MAJOR issues regarding community.

Pro's
- the gun play is awesome
- the missions are well developed
- the sound is excellently done
- Cosmetics will look cool.
- I like the direction of the game play itself, it could be really good.

Cons
- There is next to no use using the Pepper guns or equipement / flashbangs etc. they simply require way more coding to get working. when your team hits u with a flash or pepper bullet you cannot see anything and you're screwed for like 15 seconds. AI literally take half a mag of pepper bullets and still 1 tap you like nothing happened.

- The fact there are no dedicated servers, and that player hosted lobbies have full control to abuse and manipulate the game is ridiculous. I've had screaming children, abusive and racists control lobbies and other times hosts will randomly abuse their ability to ban / restart the game.

For example: Host dies 6 times failing the basic Raid on 213 park homes where you enter the gas station first, and restarts the game 6 times. 7th time someone else dies and he refuses to restart the game. Wasted 20 minutes of everyone's time.

Another example: Host dies a few times because "1 guy out of the 4" isn't grouping. he goes to alternative entrance's and usually flashes / makes noise to distract the AI while we enter. its a great strat. Host gets super mad, abuses the hell out of the guy (swearing and racism) and then kicks him from the game. Essentially the Host was just bad at the game and was able to abuse host powers to make himself feel better. - he still died after kicking the guy as well.

The game is good, but unless you're always playing with mates theres no point. 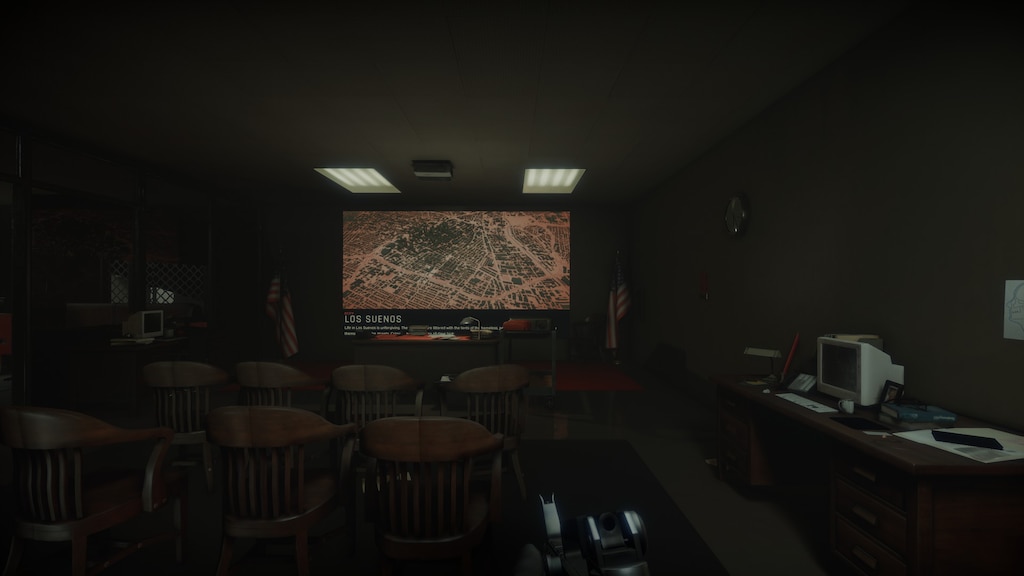 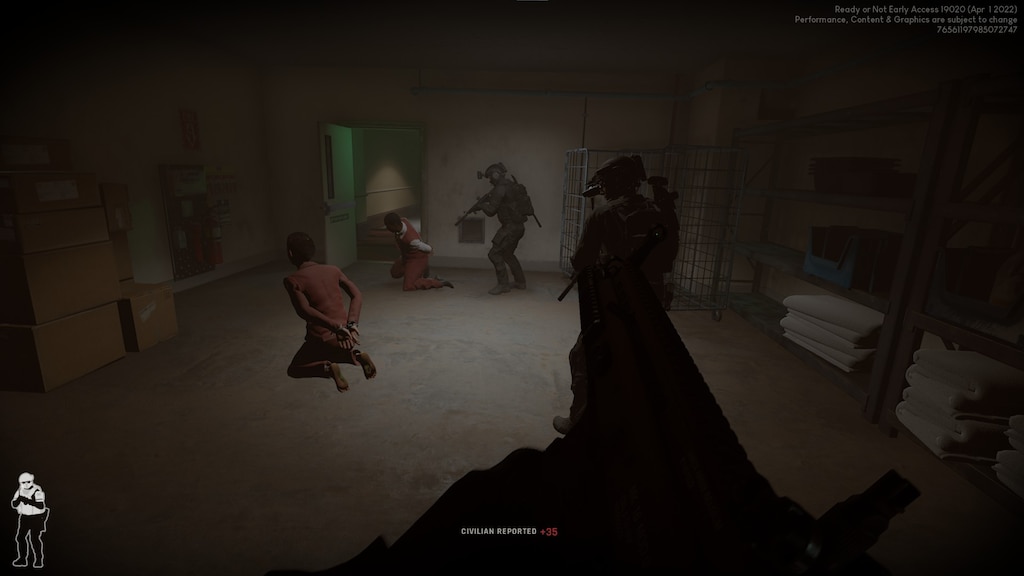 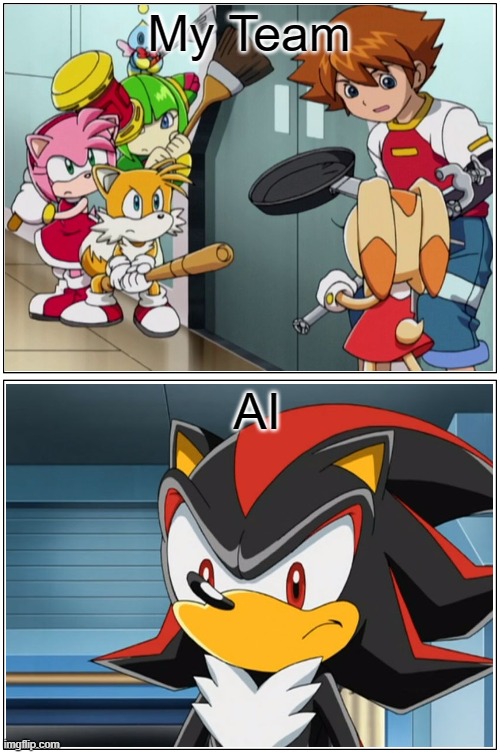 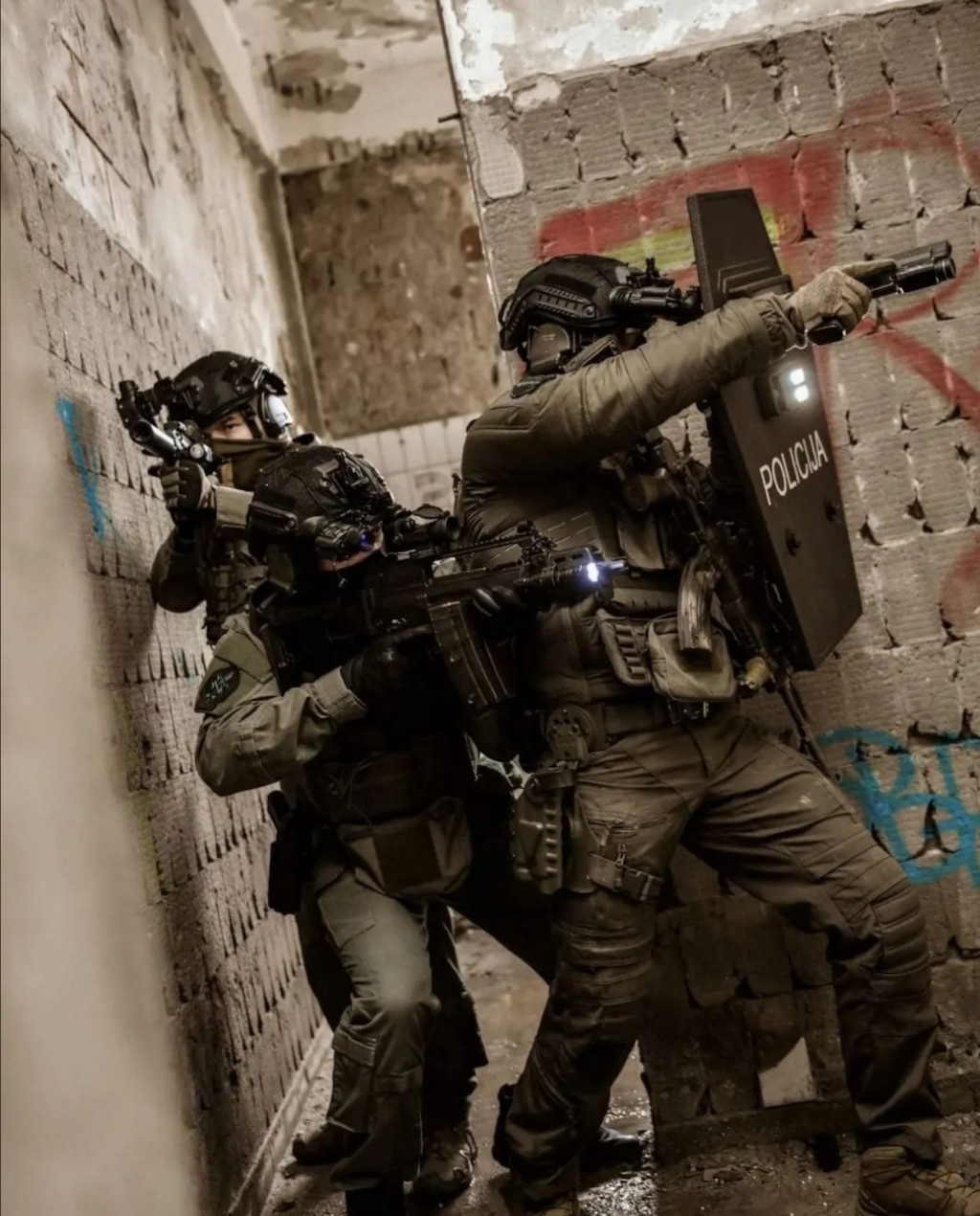 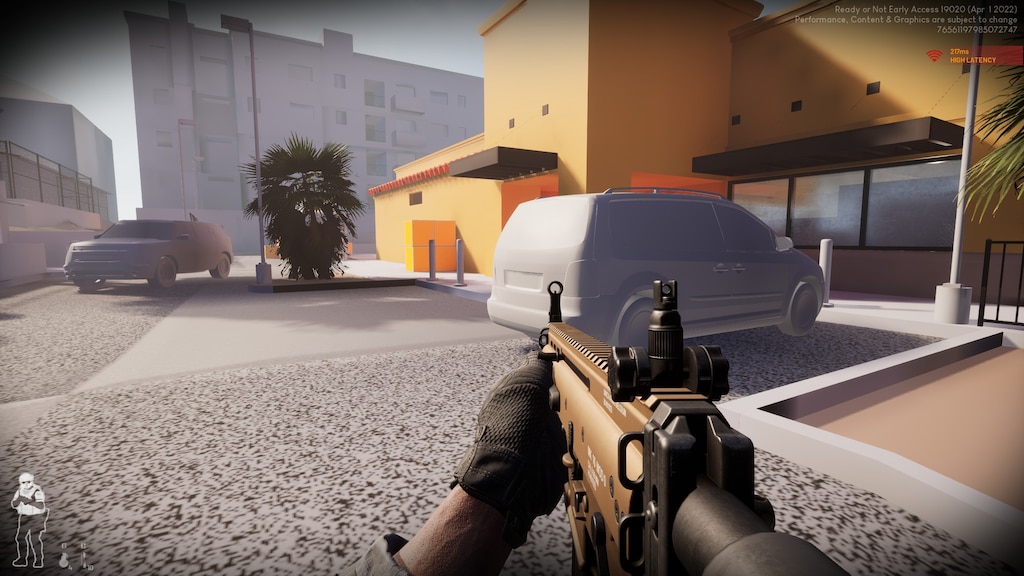 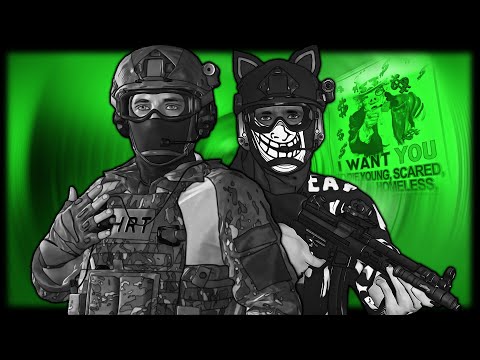 0
1
Ready Or Not, Here Comes The Memes 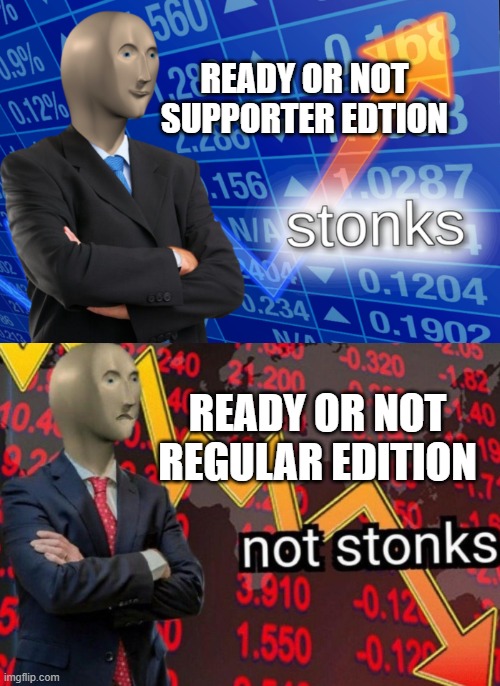 0
1
Ready or Not editions in a nutshell 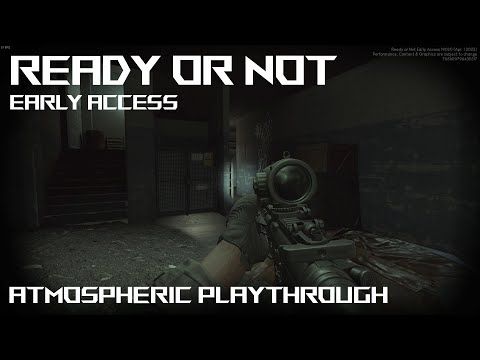 0
0
Ready or Not: Dark Corners of Port Hoken 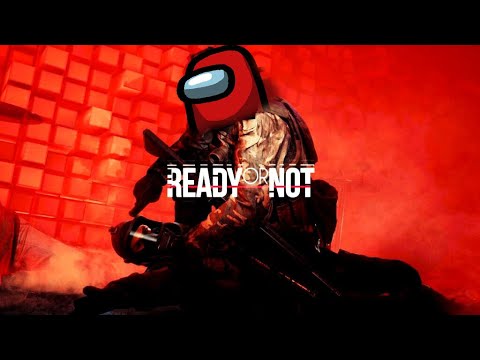 0
0
Ready or Not kinda sussy 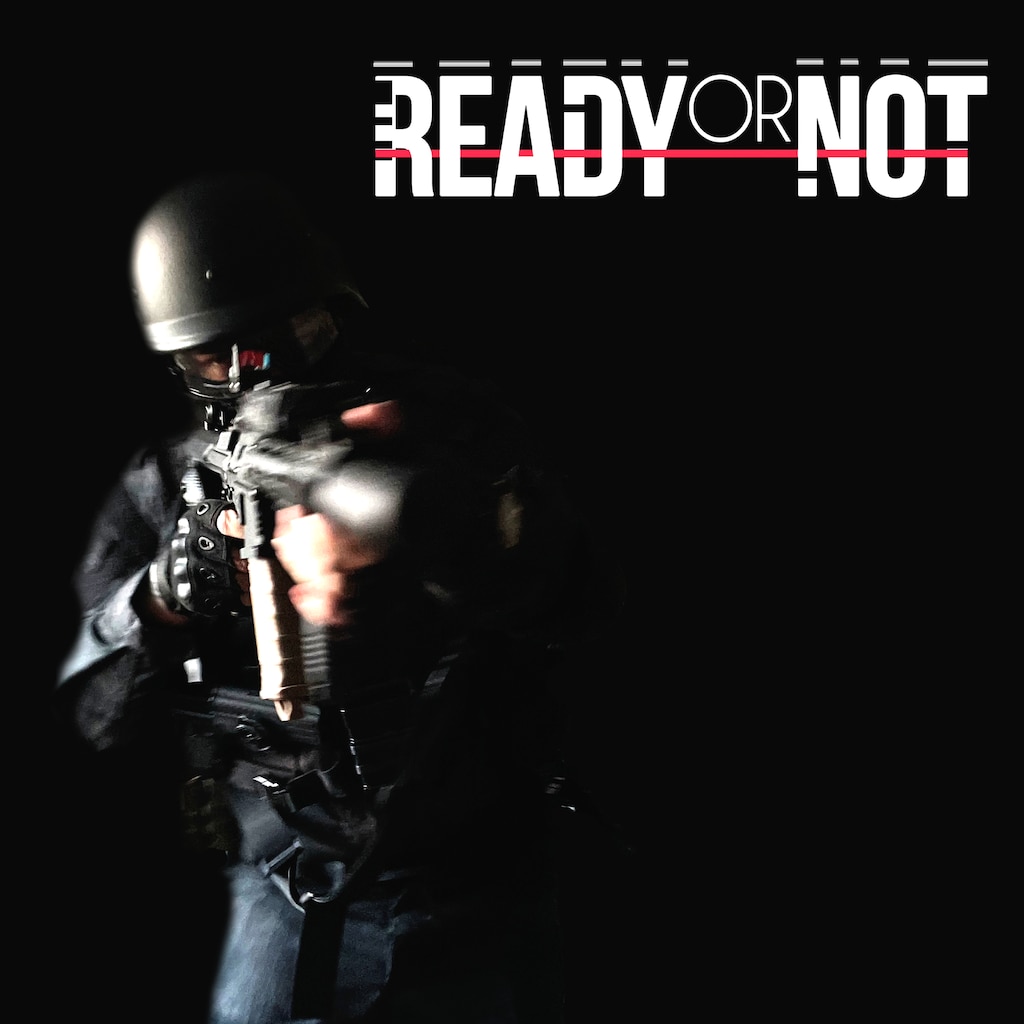 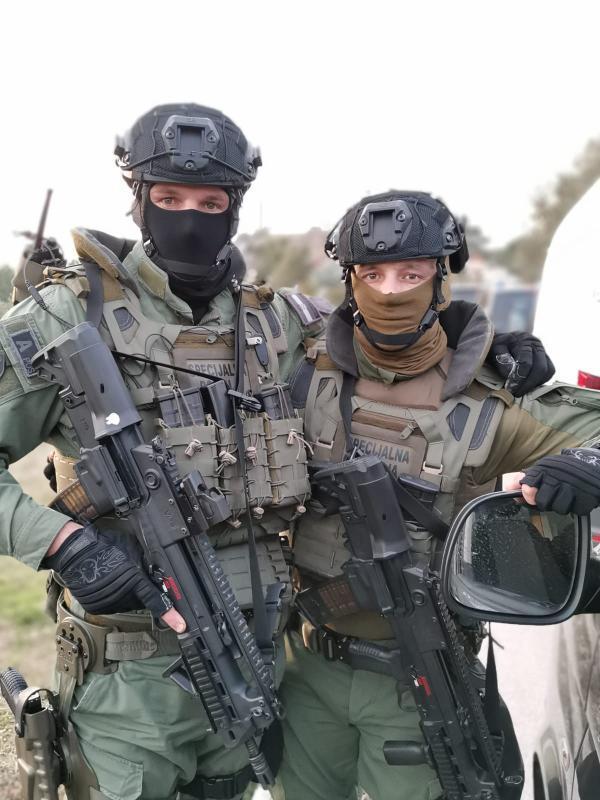 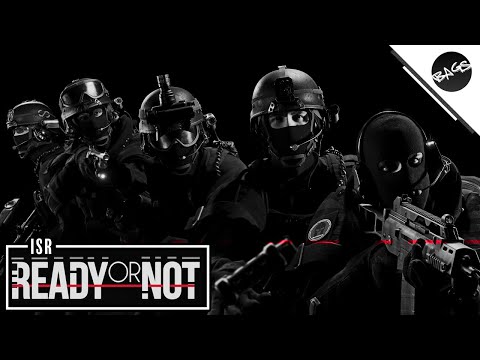 0
0
Ready or Not | Indie Short Review 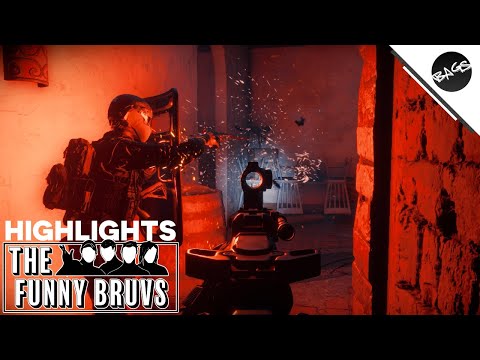 ✪ reggiN ✪
View all guides
what up with the keybinds?
i know its in early access but god i feel like this game wasnt even made for pc
5

CynicalMT
38 minutes ago
General Discussion
are servers having difficulties?
I have been playing for a good 6 hours and have had a handful of games not having a connection lost to host, Host Migration and the host crashing over and over, and at times it won't even try to connect I know that my connection is not the issue cause I've tested other games and playing videos but this constant Host Migration I'm sure is not every person I meet just leaving over and over or actually crashing...
5